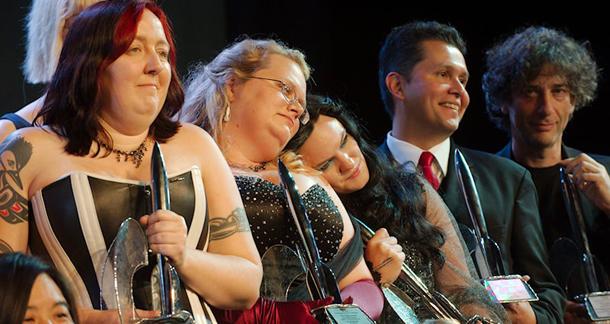 Chicon 7, The 70th World Science Fiction Convention (better known as WorldCon), announced the Hugo Award winners this past weekend in Chicago. The Hugos have been presented annually since 1955 by the World Science Fiction Society and are one of most prestigious awards in the genre, along with the Nebula.

Among Others, by Jo Walton received the award for best novel, The Man who Bridged the Mist, by Kij Johnson won best novella, and Ken Liu brought home the best short story award for The Paper Menagerie. Neil Gaiman also won an award for the episode of Doctor Who he wrote, "The Doctor's Wife."

There were many different categories rewarded that night, such as Best Graphic Story, Best Dramatic Presentation (long and short form), Best Editor (long and short form) and also Best Novelette. (It's good to see shorter forms get recognition.) You can consult the full list of winners on WorldCon's website if you're looking for some new, quality science fiction to read.

Class Director
Rob from New York City is reading at a fast enough pace it would be cumbersome to update this September 5, 2012 - 9:17am

That was a great episode of Doctor Who. Well-deserved.

Is it just me, or does Neil Gaiman look like he is plotting something nefarious?

I think it is because he is inexplicably looking directly at the camera for this picture, while the rest are looking at the crowd. Maybe it is sort of like magic. No matter what picture you take of him, he is always looking right at the camera. Neil is watching us all.

Joshua Chaplinsky from New York is reading a lot more during the quarantine September 5, 2012 - 12:16pm

It almost looks like he photoshopped himself in there.