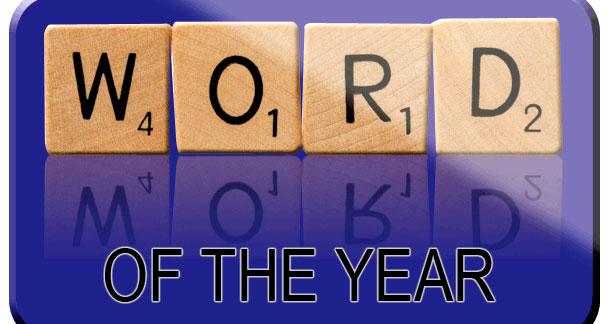 Looking to expand your palaver?  Is that word-of-the-day calendar about as blasé as last night's meatloaf?

Well, we've got just the thing to pump up those vernacular vitals.  That's right, the 2011 words of the year are in (cue the vocab fetishists).  Yes, you too can do that thing where you slip an irregular word into casual conversation over PBRs to make your friends leery of your intellect.

"How can you guys like the new Radiohead album?  I found it sooooooooooooooooo meretricious!"

First up, we've got Oxford Dictionaries with their official selection:

And before you get your undergarments in a whirling dervish of ire, Oxford is well aware that their selection is actually two words.  They'd like to remind the public that a two-word expression is called a 'compound' and is treated as one word [a 'headword'] in the dictionary. This is not the first time that a two-word expression has been selected as our WOTY. In 2010, the UK Word of the Year was 'big society.'

Bunga bunga (noun): used in reference to parties hosted by the former Italian prime minister Silvio Berlusconi, at which various illicit sexual activities were alleged to have taken place.

Clicktivism (noun): the use of social media and other online methods to promote a cause. [Blend of 'click' and 'activism']

The 99 percent: the bottom 99% of income earners, regarded collectively.

Dictionary.com went in a more traditional direction, choosing a word instead of a term, and boy, does it sound dirty.

tergiversate (verb): to change repeatedly one's attitude or opinions with respect to a cause, subject, etc.; equivocate.

So what do we think, LitReactors?  Happy with the results?  And while we're on the subject, what are your favorite obscure words?

www.bungabunga.com is still available if anyone wants to buy the domain.  Just sayin'.

Chester Pane from Portland, Oregon is reading The Brief and Wondrous Life of Oscar Wao by Junot Diaz November 30, 2011 - 1:15pm

Nice article. Love me some words. Undergarments in a whirling dervish of ire got me laughing. So gettin' all plagiary on that one.

I'm a big fan of Portmanteau--fusion words like rockumentary and malware. German language capitalizes on these to no end. Lewis Carroll converted the word himself from french to describe the words he was fusing together to create new ones. Words like galumph (gallop and triumph) and frumious (fuming and furious).

Some recent concoctions from authors you might have heard of:

Batholith- used by Vanessa Veselka to describe a Bed, Bath and Beyond in her prescient book Zazen.

Hurtpleasure- one of Lidia Yuknavitch's examples in The Chronology of Water, Yuknavitch creates a lot of great portmanteau with her linguistic bending and melding.

Now I'm off to the to have a sexcapade (sex+escapade) with the cybrarian (cyber+librarian). I hope I don't forget my good netiquette (net+etiquette).

Joshua Chaplinsky from New York is reading a lot more during the quarantine November 30, 2011 - 2:04pm

I love combining existing words to make new words. It's all part of the fun of writing.

And you hit the nail on the head, Brandon. King of Limbs is totally meretricious.

I did that for you because I know you hated it.

rmalis from Pittsburgh, PA is reading The Art of Fielding by Chad Harbach December 1, 2011 - 8:47am

I was listening to Adam Corolla's podcasts and he talked about a word that Albert Brooks said to him: compusult - a complement that comes out as an insult.

thanks for the article!

As I'm not a native speaker of English, it's still hard for me to write in it. But I think my teachers will be immensely impressed If I use any of the words described above)