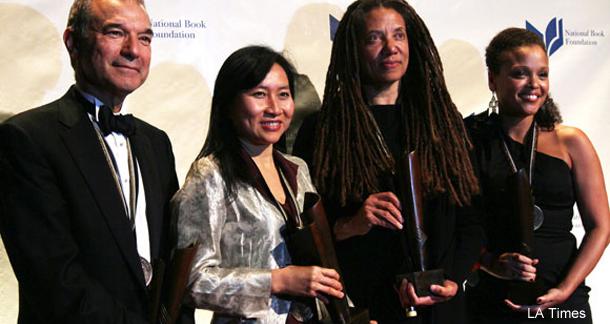 The National Book Award winners were announced last night! Did you notice? No? That's fine. Their blessing is a pretty big deal, but really, no one's paid that much attention to them until this year, when they announced the wrong finalist and then unceremoniously removed her book from the running.

But that's in the past. Today is about the winners. Without further ado:

The National Book Award for Young People’s Literature went to Thanhha Lai for Inside Out and Back Again (HarperCollins).

For all the ten years of her life, HÀ has only known Saigon: the thrills of its markets, the joy of its traditions, the warmth of her friends close by . . . and the beauty of her very own papaya tree.

But now the Vietnam War has reached her home. HÀ and her family are forced to flee as Saigon falls, and they board a ship headed toward hope. In America, HÀ discovers the foreign world of Alabama: the coldness of its strangers, the dullness of its food, the strange shape of its landscape . . . and the strength of her very own family.

This is the moving story of one girl's year of change, dreams, grief, and healing as she journeys from one country to another, one life to the next.

The National Book Award for Nonfiction went to Stephen Greenblatt for The Swerve: How the World Became Modern (W. W. Norton & Company).

A riveting tale of the great cultural "swerve" known as the Renaissance.

One of the world's most celebrated scholars, Stephen Greenblatt, has crafted both an innovative work of history and a thrilling story of discovery, in which one manuscript, plucked from a thousand years of neglect, changed the course of human thought and made possible the world as we know it.

The National Book Award for Fiction went to Jesmyn Ward for Salvage the Bones (Bloomsbury USA).

A hurricane is building over the Gulf of Mexico, threatening the coastal town of Bois Sauvage, Mississippi, and Esch's father is growing concerned. A hard drinker, largely absent, he doesn't show concern for much else. Esch and her three brothers are stocking food, but there isn't much to save. Lately, Esch can't keep down what food she gets; she's fourteen and pregnant. Her brother Skeetah is sneaking scraps for his prized pitbull's new litter, dying one by one in the dirt. Meanwhile, brothers Randall and Junior try to stake their claim in a family long on child's play and short on parenting.


As the twelve days that make up the novel's framework yield to their dramatic conclusion, this unforgettable family- motherless children sacrificing for one another as they can, protecting and nurturing where love is scarce- pulls itself up to face another day. A big-hearted novel about familial love and community against all odds, and a wrenching look at the lonesome, brutal, and restrictive realities of rural poverty, Salvage the Bones is muscled with poetry, revelatory, and real.

And finally, the National Book Award for Poetry went to Nikky Finney for Head Off & Split (TriQuarterly, an imprint of Northwestern University Press).

The poems in Nikky Finney's breathtaking new collection Head Off & Split sustain a sensitive and intense dialogue with emblematic figures and events in African American life: from civil rights matriarch Rosa Parks to former secretary of state Condoleezza Rice, from a brazen girl strung out on lightning to a terrified woman abandoned on a rooftop during Hurricane Katrina. Finney's poetic voice is defined by an intimacy that holds a soft yet exacting eye on the erotic, on uncanny political and family events, like her mother's wedding waltz with South Carolina senator Strom Thurmond, and then again on the heartbreaking hilarity of an American president's final State of the Union address.

So what do we take from all this? It's pretty cool that two of the books (Finney's and Ward's) were put out by independent publishers. Though, Bloomsbury USA is a division of the London-based Bloomsbury Publishing, which holds the UK rights to Harry Potter, so it's not exactly like they're hurting for exposure. Though, I'm sure Ward is looking for exposure, so that's good!

Has anyone read any of these books? I have not.