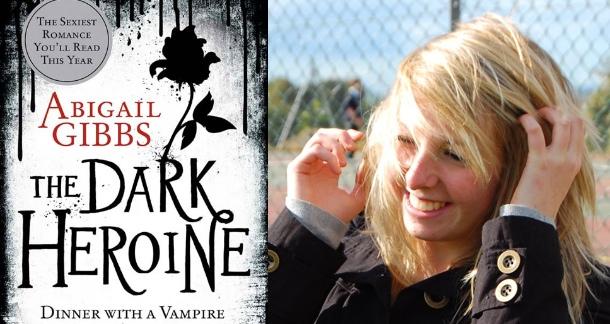 When Abigail Gibbs read the Twilight series, she thought it was great and all, but told the BBC that her ideal version was bloodier, edgier, and more British. So she did what any 15-year-old would do in that situation: Wrote her own version and posted it on Wattpad. She got to nearly seventeen million readers, at which point she was spotted and signed to HarperCollins by age 18. Wait...what?

Gibbs's new six-figure deal with the Big Six publisher includes her original novel, The Dark Heroine: Dinner With A Vampire, as well as a yet-to-be-completed sequel, which she'll write in between her classes at Oxford University. Gibbs describes the book, the story of a teen kidnapped by vampires and the ensuing love triangle, as "the sexiest romance you'll read this year"—slightly disturbing when you consider that it was written by a 15-year-old.

The eBook edition is available in the UK starting today and in the US on September 18th. The paperback will hit stores in October. The times they are a-changin', and the path to success isn't as straightforward as it used to be. Personally, I think it's a good thing because who knows if talented young authors like Gibbs would get picked up through traditional means. What do you think of her route to publication?

On another note, is anybody but me sick of vampires yet? They're sooooo 2009, and zombies are so 2010. Can we get some sea monsters or mummies or ogres up in here, please? I mean, where do we go from here, people?

Yeah! Sea monsters! I will take that Cthulhu romance novel I have been keeping in a drawer.

Aside from Justin Cronin's "The Twelve" coming out, can we please quit with all the vampire books. Everytime I turn around there is another vampire book coming out. What ever happened to all the other horror creatures!

That bit of advice that people said "Don't join a trend of books, they will be unpopular by the time you write the novel."

It is a lie it seems.

I'd like to see horror swing back away from gimmicks and trends altogether. A monster can be anything.... what's important is the psychological aspects of it. I'd actually start reading horror again if some strong writers who understand actual terror would come my way, rather than this endless trend stuff.

Joshua Chaplinsky from New York is reading a lot more during the quarantine September 13, 2012 - 9:49am

Clint Howards. The next romantic monster YA trend. I'm calling it.

I'm very happy for her, but I'm sick of vampires. So, so, so sick of them. Never thought I'd say that, because I used to cling to my Anne Rice books like they were life.

Yes, bring on seamonsters, mummies, and ogres! The newest trend I've seen (since Stephenie Myer mentioned she was into them) is mermaids. Sick of those too.

Mermaids of the "Cabin in the Woods" variety are where it's at!

Sandworms and space slugs also need some love. That is a paranormal romance novel that is so obvious and loooong* overdue, is it not?

edsikov from New York by way of Natrona Hts PA is reading absolutely nothing September 14, 2012 - 8:12am