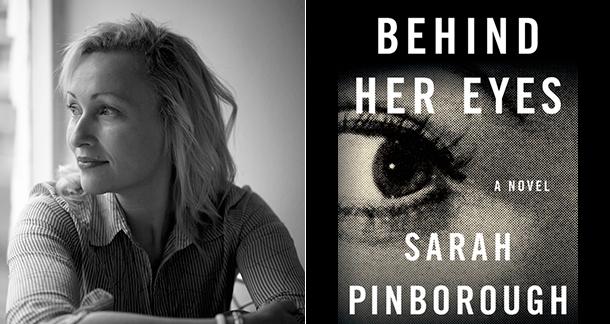 I would be shocked to hear you haven't heard about Sarah Pinborough's new novel, Behind Her Eyes. Everybody is talking about it, and for good reason. It's excellent. If you haven't read it already, immediately take a good hard look at your life and rectify this issue.

Pinborough was kind enough to take the time and answer a few of my questions. You can read them below as you wait for your new book purchase to arrive.

I believe you just finished up a new book tour in the United States, right? How was it?

It was really good. It's always nice to meet readers and booksellers and there were some great book groups who showed up at the events and that saw me through the jet lag and all the travel (I hate flying!). I also got to meet up with my ex-flatmate in Seattle (he just got married and moved there) and hung out with Irvine Welsh in Chicago, and the Americans are very friendly so you never really feel lonely. There was also a lot of apologising for Donald Trump which was heart-warming. I apologised for Brexit in return.

Behind Her Eyes received massive attention before its publication, particularly concerning the ending. The first thing you hear about this book is the ending is a must-read. In fact, I bought the book because of the hype for the ending, without even reading the book’s description. Why do you think twist endings make readers lose their shit so much? Even the prospect of one existing will make us freak out. It seems to me like a twist ending should only work if you go into it not expecting one, but that doesn’t often seem to be the case.

I don't think you could write this book without having the ending already figured out, unless you wanted to do a lot of drafts.

If you have a great twist then — especially post Gone Girl I think — it's bound to be picked up on by the marketing department. We all love a puzzle and we all love to think we can guess the twist. It's what makes us behave like lemmings and do all those data-mining Facebook 'Only 10% of people can see the/answer the blah blah' quizzes. People still talk about the twist in The Sixth Sense. I'm sure twists will reach their zenith soon, if they haven't already, but they are fun in a thriller these days. It's just an extra layer on the 'whodunnit'.

Did you already know the ending for this one before starting the book? Are you much of an outliner or more of a pantser?

I don't think you could write this book without having the ending already figured out, unless you wanted to do a lot of drafts. I am lazy — I'm a planner. I'd rather plan a lot as I go than write ten drafts. I tried being a pantser once, while writing The Death House, where the structure was less important as it wasn't about 'clues', but I ended up just staring at a blank page and having no idea what to write.

Behind Her Eyes successfully manages to keep its readers bouncing up and down, desperate to reach the next chapter. Do you have any advice for writers about keeping their books suspenseful?

Gosh, I wouldn't presume to tell other writers how to write. For me, I've found that screenwriting has helped in that in a film or TV show every scene has to do something, and I've started looking at scenes in books and checking if that's the case. (I don't always succeed ;-)) Have fun with it, that's all I'd say.

Behind Her Eyes reads as a fairly straight-forward thriller, and the ending branches off into more unexpected territories. I feel like there’s probably a good chance this book is going to piss off those who aren’t used to their fiction getting weird, those who are more in the James Patterson crowd and are discovering your book for the first time thanks to Girl on the Train comparisons. Personally, I absolutely loved the ending. Was there any fear before publication of how it would be received because of this departure from the norm?

Oh I think we all knew it would be divisive but thankfully the majority are with us ;-). For me, it's pretty obvious from the outset that there's something different going on, but then I write a lot of cross-genre stuff. But it plays out like a thriller and the clues are all there, so it's definitely more psychological thriller than anything else. But yes, there are some readers who really didn't like the ending, and that's to be expected when you try doing something a little outside the box.

For those interested in more books with a similar genre approach, what would you recommend?

I know a while back you were taking meetings about the film rights for the novel. Has anything official been announced yet that you can discuss?

We've done a deal but it's not signed yet so I can't announce it yet.

Let’s say you’re given the insane task of casting the Behind Her Eyes film adaptation. Who do you pick for the three leads?

I haven't a clue. I don't see characters at all when I'm writing them. Maybe Amy Adams for Louise.

A couple of TV projects and the next book — which is another thriller, not a genre-blender but equally as shocking hopefully as Behind Her Eyes.

Thank you for your time!