General Discussion : Stuff I want for Christmas; please buy me these things:

The Beat Thang looks amazing. It's a portable DAW for making music.

That's a funky looking bass. I like how the headstock has a quiff.

I actually have no idea what I want for Xmas. Don't really celebrate it so have given it no thought. I buy maybe four people presents and shall be at work all Xmas day and boxing day anyhow.

Usually I get books and bourbon. They are two things that people know I am likely to be happy with. So it could be worse.

Ill ship you all those things in the mail. All I require is a book deal in return.

Nice Thunderbird, had a chance to get that but the sales guy was being a real prick so I just moved on to try this and ended up buying it on tuesday and it is fucking awesome so much variety of sounds you get with it along with a price tag of $385, can't beat it. BUT I'm thinking of upgrading to a 5 string Schecter which is more affordable than a 5 string Warwick. Here is what I have...

Instag8r from Residing in Parker, CO but originally from WV is reading Blood Meridian by Cormac McCarthy November 18, 2011 - 2:19pm

This is what I want to find under the tree this year. Don't think it's gonna happen.  :(

Damn that would be awesome.

I saw this odd car on the way to work today, the Nissan Juke, and I kind of want one now. I guess it's a mini-crossover.

For some reason, it reminds me of one of my all-time-fav ugly cars, the AMC Eagle.

Every year in early november I post up a Christmas list on Facebook. The problem is I'm not visiting my family for Christmas, which means they won't be including me on their Christmas shopping lists.
This is how they do things, seriously. When I was 15, I spent Christmas at my grandma's house. I returned on the 26th to find that, while my sisters received elaborate doll houses and my brothers were given a game system and several games, I received... a copy of Interview with the Vampire (The DVD, not the book,) a pack of DC cards (I wasn't into that stuff at the time. Wonder Woman did nothing for me) and--I shit you not--a  baby toy bought from the toy section of a grocery store. (Reminder: I was 15 at the time.) I learned that Christmas that if you're not there on Christmas, you aren't getting anything useful.
I know, I know... Christmas isn't about gifts and junk. It's about family and togetherness. Except I'm spending the holidays alone, so I need to replace the whole togetherness aspect with some awesome presents to stifle the pain of loneliness. You guys get what I'm saying, right?

Invite them over and buy them all used gift cards and stuff from Rite Aid.

Thunderbird, awesome! I've been dying to get a Non Reverse Firebird for years, but money and life itself has been my mortal enemy.

I'm hoping to get a Kindle. Never owned an e-reader before. That's all I really want, except for a new office job, a cool car, lithium tablets, and to look like Matthew McConaughey with his shirt off but with my original, much prettier face.

I couldn't resist posting this: http://www.youtube.com/watch?v=5oECEQq7NSE

Chester Pane from Portland, Oregon is reading The Brief and Wondrous Life of Oscar Wao by Junot Diaz November 18, 2011 - 6:52pm

I want a new butt-hole. My current one stinks.

But I think I'll be wanting that for many a Christmas, as, being an adult and shit, I usually have more pressing things to spend between $4-7k on.

I got my boyfriend a first edition, first printing, autographed Fight Club. I don't think he's getting me anything.

I want a new butt-hole. My current one stinks.

I can hook you up.

I got my boyfriend a first edition, first printing, autographed Fight Club. I don't think he's getting me anything.

I would like some money, please.  I don't like waiting for things, so I normally just fork over my hard-earned when I want something... Consequently, when Christmas rolls around, I generally don't know what I want so far as a specific present goes - other than money, to go towards balancing out for stuff I've bought myself already.

Typewriter Demigod from London is reading "White Noise" by DeLilo, "Moby-Dick" by Hermann Mellivile and "Uylsses" by Joyce November 19, 2011 - 5:48am

I want a couple animes, (Sora no Woto, Elfen Leid and Ouran High School Host Club) a sword and some fun books. I'm not picky as to which type of sword, however a bokken would be beyond awesome. Hopefully, if my waiter-ing pays off, I'll be able to spend $50 on you guys.

I liked Elfien Lied. A really violent, but kind of sweet show.

Typewriter Demigod from London is reading "White Noise" by DeLilo, "Moby-Dick" by Hermann Mellivile and "Uylsses" by Joyce November 19, 2011 - 7:33am

@Rae Yeah thats why I don't date that often.

Nick Wilczynski from Greensboro, NC is reading A Dance with Dragons by George R.R. Martin November 19, 2011 - 8:29am 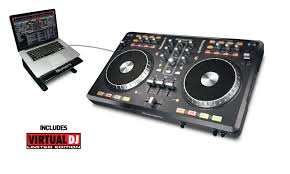 I've been trying to get some digital turntables for a while now. So I can more efficiently chop things. And also screw them.

Although now that I follow the link that beat thang looks compelling. I'll send you one if you send me one.

I want a girlfriend for christmas. Actually a set of three would be nice: a brunette, a redhead, and one with glasses.

You aren't kidding. I would pass out if opened a present and it was a signed Philip Dick. The guy's scribble is a pricey one for sure though. I guess he just didn't give that many autographs. Him and Asimov seem to be the most collectable amongst the Sci Fi authors.

Last year I got a signed Bret Ellis (Imperial Bedrooms) and a signed Will Baer (Kiss Me, Judas) as presents. I was very happy with those.

A PKD though, that would be awesome.

R.Moon from The City of Champions is reading The Last Thing He Wanted by Joan Didion; Story Structure Architect by Victoria Lynn Schimdt PH.D; Creating Characters by the editors of Writer's Digest November 19, 2011 - 11:20am

What I want I can't have because she won't talk to me anymore.

Chester Pane from Portland, Oregon is reading The Brief and Wondrous Life of Oscar Wao by Junot Diaz November 19, 2011 - 12:22pm

@Rae: Really, he is committing relationship suicide if he doesn't get you anything. That wouldn't fly around here (my house).

@Dakota: Dating is expensive. Especially if it leads to marriage plots.

@Chester & Dakota: Ha! I say that because last year I had a fit and told him "don't buy me anything because I don't have money to get you anything!" Well he had already gotten me something. He returned it because he didn't want to make me feel guilty. I then went around and got him a print from his favorite artist... Maybe he's learned not to take me so seriously.

A special gal's favorite comics is that Ghostworld, Love & Rockets style stuff. I want to write a little script for her to draw her art to as my super lovey gift, though realism, especially in comic books, isn't exactly my blanket forte. I am willing to take any suggestions into what makes good realist alternative comix. My idea has gone as far as calling it Legumes, and basically doing Peanuts characters as twenty-somethings, but that mostly has potential in being crap.

Read Adrian Tomine's "Summer Blonde".  Those are awesome real life comic stories.  Or if you want to get Twink Peaks-ish, read "Like A Velvet Glove Cast in Iron".

@Typewriter I can get you a sword from our Chinatown if you want one. They aren't super awesome to fight with, but they look pretty on top of bookcases. Ouran is a good anime, too. I love gender-bendy stuff, though, especially girls as boys. I don't know why. I blame Shakespeare.

I thought about it some more and for Christmas I'd like a better coffee maker. Maybe something smaller than our industrial-sized 12 pot thing. Or one of the softbrew coffee makers! I want to buy one but I feel like it's too expensive for what it is.

I'm trying to find Japanese Kit Kats. (I have a weird need to give people a main present and a side present.) I've found places online that sell them, but only in bulk for $40 or more. Does anyone here happen to know another way? I'm looking for the flavors specifically in Japan: green tea, soy sauce, creme bulee, strawberry cheesecake...stuff like that.

Typewriter Demigod from London is reading "White Noise" by DeLilo, "Moby-Dick" by Hermann Mellivile and "Uylsses" by Joyce November 21, 2011 - 3:32pm

And here's your Pocky. Be quick, it ends in 15 days http://www.ebay.co.uk/itm/Kit-kat-Kitkat-Green-Tea-Uji-Matcha-KYOTO-12-B...

Typewriter Demigod from London is reading "White Noise" by DeLilo, "Moby-Dick" by Hermann Mellivile and "Uylsses" by Joyce November 21, 2011 - 3:41pm

@missy  preferably this one; http://www.animerpm.com/Single-40-Hardwood-Datio-Bokken-Kendo/M/B000EVPJ... tho something else would do excellently

I want a hug for christmas :(

I'll settle for a Kindle Fire though :)

Typewriter Demigod from London is reading "White Noise" by DeLilo, "Moby-Dick" by Hermann Mellivile and "Uylsses" by Joyce November 22, 2011 - 10:04am

I want to NOT go visit my in-laws.  I ask for the same thing every year.

This, please.  I'll also need a dog and a pair of doggles to go with it.

Raelyn: If your boyfriend doesn't get you anything, feel free to send that book my way and I will compensate you with an appropriate sum of cash. ;-)

Chester Pane from Portland, Oregon is reading The Brief and Wondrous Life of Oscar Wao by Junot Diaz November 25, 2011 - 6:00pm

I want one of these and the guts to fly it:

Instag8r from Residing in Parker, CO but originally from WV is reading Blood Meridian by Cormac McCarthy November 25, 2011 - 8:14pm

Lomokino. This is what I'm really hoping for.

@Raelyn - If your boyfriend doesn't get you anything he's a fool. Trade him in. I learned a long time ago not to listen when my wife told me she didn't want anything for her birthday or Christmas.

@bryanhowie - I have a friend that has a Ural, it's a freakin blast. But that sidecar is hard for a normal size man to fit in. It is more suited for a dog as you mention.

Typewriter Demigod from London is reading "White Noise" by DeLilo, "Moby-Dick" by Hermann Mellivile and "Uylsses" by Joyce November 27, 2011 - 7:25am

@jack, here's the link. Ufort, I don;t have 70 dollars on hand :P http://www.airpistol.co.uk/daisy_air_rifles.htm

I'd probably just shoot my eye out...

I decided I want a Nintendo DS.  I miss that little fucker Mario.  Italian plumbers are apparently superheroes.  What is this Brooklyn?

Instag8r from Residing in Parker, CO but originally from WV is reading Blood Meridian by Cormac McCarthy November 28, 2011 - 12:36pm

One of these would be really cool. (Do they really exist?) Game of Thrones freak here.

But waht I really want is this. PLease Please Please, Santa. I don't think my wif would mind if Miss Wilde came to stay for a while. We have a really big bed.

Typewriter Demigod from London is reading "White Noise" by DeLilo, "Moby-Dick" by Hermann Mellivile and "Uylsses" by Joyce November 28, 2011 - 1:17pm

@gator, you have good taste. If we're talking human presents, I would like three hours with andrej pejic.

Instag8r from Residing in Parker, CO but originally from WV is reading Blood Meridian by Cormac McCarthy November 28, 2011 - 2:26pm

Andrej Pejic, androgyny at its finest

I would like a new car...mine just got stolen.

@Raelyn - OMG!  That is terrible!  What happened?