Thats awesome dude. At this rate Solarcide will be a house hold name.

Damn, sorry I bumped the page back.

Cheers man! For the kind words of course, not for bumping the page back. For that I shall come get you!

Yeah it's great to get Clevenger onboard for the interview. I've been reading all his new short stories recently and he always nails it. Can't wait for that third novel.

Thanks everyone, and of course you'll get signed copies...

Not just me, mate, Nathan and I put in a few questions in each for this one.

So you guys don't have to navigate to find the interview.

Well I guess I can say that everyone can be looking for my story in the Psychosis anthology.

And you were just going to give up before, Dakota!  Have a little faith, man. I knew you could come up with something.

jl85 from originally East Tennessee now Southern California is reading everything I can January 8, 2012 - 9:19pm

I'm definitely hooked on Solarcide now!! So glad to see people from here doing great things for the writing communit!

Well I owe it to the litreactors that wanted to kick my ass if I didnt haha.

Recording of a show (7:45 mark or thereabouts) where my band is featured.

EdVaughn from Louisville, Ky is reading a whole bunch of different stuff January 11, 2012 - 6:20am

Hey I get to post something in this thread. Got my first published story up over at Shotgun Honey. Check it out.

Nice one, Edward. That rocks. The story is cool.

Shotgun Honey is a quality site.

Thanks man. Yeah I really like that site too.

The special guests section at Solarcide is loving life this January.

Next up we have a story from Bryan Howie, who we all know and love. The man is a machine in that there workshop.

Your Mother's Smile is an experiment in cross-gendered perspective, and Bryan has an uncanny hook in the female mind. It's is a blast from the past, having previously been awarded 'best of' merits by Carve magazine.

You can check it out in the guest stories section, here.

Great story, and cool site, too! First time I had a real chance to check it out, nice work!

Love your mini-bio at the end too, Bryan.

Yeah, things have been gathering steam over at the site recently. 2012 is gonna be a good year. Litreactor folks are playing a massive part of our success, so from me, and also from Nathan, I issue huge thanks to you all.

My flash fiction "The Passenger" is being published in the Spring issue of Blink-Ink magazine.

You can read it here: http://litreactor.com/discuss/your-latest-writing-challenge

@Jay thanks for posting the link to http://www.blink-ink.com/

I was interviewed by Mourning Goats.

And the Solarcide interviews are really fucking good. I wish I would've thought of that name first, though.

If anyone is keen to vote, my Baltimore noir novella OLD GHOSTS was nominated for a Spinetingler Award for Best Novella.

It's Saturday Night, and We're Featuring a New Guest Story from W.P. Johnson at Solarcide!

Some of you may know him from the workshop. Some of you may not, but may be in the mood for a good horror tale nevertheless. This one's a serialized story that we're featuring over the next few weeks.

Read Part 1 of "The Last Round" HERE.

Tried my hand at a soft drum and bass song today. It's mainly piano and strings, though.

I'm looking for reviewers for my second novel, Stagger Bay.

Markus, Stagger Bay’s protagonist, is a man who overcame a horrendous childhood and criminal youth to go straight and raise a family. His violent past makes him an easy fall guy to frame for a gruesome mass murder and he’s sentenced to life without parole, losing his family in the process.

Exonerated and freed on DNA evidence after seven years, Markus is shortly thrust into a bloody do-or-die fracas during an elementary school hostage situation, becoming an overnight hero. Everyone wants in on the media feeding frenzy; to his dismay, paparazzi and news crews hound him wherever he goes. Unfortunately they’re not the only ones stalking him.

Can Markus find the path back into his estranged son’s heart? What’s Markus supposed to do, when he discovers fifteen minutes of fame is the worst thing that could ever happen to him? What can he do, now that his town is hunting ground to serial killers and rogue cops working together – and the shadowy force behind them is turning its cold, deadly eye straight at him?

Stagger Bay is a battle of wills, where every moral choice seems only to increase the body count. It’s in the tradition of Paul Cain’s break-neck-paced Fast One, or Geoffrey Household’s feral man-against-the-world Rogue Male. Stagger Bay should appeal to readers looking for a fast paced, hyper-violent thriller.

Ken Bruen (author of Blitz starring Jason Statham; and of London Boulevard, soon to be a major motion picture): “Stagger Bay proves what noir purists have known for a long time: Pearce Hansen is the new Prince of Noir. For years he’s been turning out stunning nuggets of sheer black gold, and now he finally comes into his ascendancy with this mesmerizing novel.

“Imagine James Ellroy coupled with George R. R. Martin and overseen by Charles Willeford. But PH really needs no comparison to any other writer; he’s created his own compelling dark universe that ratchets up noir to an astonishing level.”

Jason Starr (bestselling author of The Pack and The Follower): "Pearce Hansen is the real deal, the Edward Bunker of our generation. Stagger Bay is a searing, powerful, heartbreaking novel, and an important contribution to contemporary crime fiction literature."

Anthony Neil Smith (Editor of Plots with Guns!, Associate Editor of the Mississippi Review, and author of All the Young Warriors): "Pearce is a wild man, and demands your attention. Hansen is definitely one of the gonzo crowd and deserves a stage with a loud amplifier and some bright lights."

View it's particulars at http://www.amazon.com/Stagger-Bay-ebook/dp/B006ZW650Q. I can supply it in PDF or any other format you desire. Be advised that if you read this before 1/26, you can get a promotional copy of my first novel Street Raised free at Amazon: http://www.amazon.com/Street-Raised-ebook/dp/B0050JL0IM. Street Raised was blurbed by Joe Lansdale, Eddie Muller at the SF Chronicle, and Richard Ramirez the Nightstalker's fiancee tells me he's a fan as well.

thanks for the link! http://www.blink-ink.com/submissions/

My review of Karl Taro Greenfeld's exotic collection of stories is now live up at The Nervous Breakdown. This is from Short Flight / Long Drive Books, an imprint of Hobart.

Solarcide is very proud to announce our latest interview with Richard Thomas. His debut novel, Transubstantiate, is a leading novel in the recent explosion of neo-noir fiction, while the author has also published over 50 short stories—4 of which were nominated for the Pushcart Prize this past year.

Our interview is now live, which you can read HERE.

^ This was a really good interview. very cool.

^thanks. nathan did a great job, some excellent questions.

The three most recent releases from Swallowdown Press are now (finally) available at Powell's City of Books in Portland:

WE LIVE INSIDE YOU by Jeremy Robert Johnson (Small Press Featured Title)- "WE LIVE INSIDE YOU is fucking terrific. Jeremy Robert Johnson is dancing to a way different drummer. He loves language, he loves the edge, and he loves us people. These stories have range and style and wit. This is entertainment... and literature."--JACK KETCHUM, author of Off Season, The Girl Next Door, and The Woman (w/Lucky McKee)

THE DEADHEART SHELTERS by Forrest Armstrong- "The literary equivalent of an Alejandro Jodorowsky film."--CARLTON MELLICK III, author of Armadillo Fists

I did a new article on Freedom Activists today, one I hope goes viral. Enjoy!
http://freedomactivists.org/top-stories/wake-up-america/

Americantypo from Philadelphia is reading The Bone Clocks January 28, 2012 - 9:49am

Hey litreactors, my story "The Stench" is live at http://www.kzine.co.uk/

Is you read it and take the time to write a review, I'll send you something special in the mail.

I did my first ever piece in the music journalism genre today for a fantastic musician I know.
http://laurancekitts.com/2012/01/29/artist-of-the-month-jordan-martyr/

I believe if he's still in for it, I'll be doing Phil's band Paris and the Hiltons in a couple weeks.

I'm still in for it, of course.

I need to hide from the Chinese agents.

Good to hear man, figure I'll do an album review for it, add in some pictures, and send you some interview questions since I can't afford to go over there and stay drunk on your couch.

No, just please don't do it, and that should be enough.

A piece of flash-fiction, that I actually wrote for a thread here on LitReactor, is going to be put up on 50 to 1.

It's a super small achievement, but I'm pretty proud. It's my first time being published anywhere.

You should be proud, good work.

PopeyeDoyle from Rio Grande Valley, TX is reading Chronology of Water February 1, 2012 - 6:22am

It's a super small achievement, but I'm pretty proud. It's my first time being published anywhere. 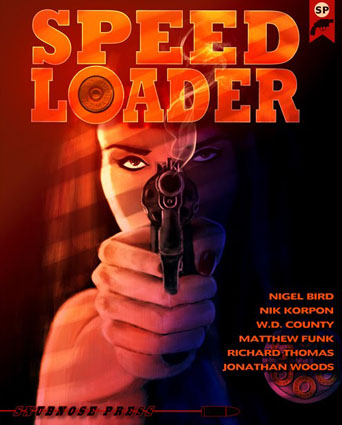 Speedloader, with stories by Nigel Bird, Nik Korpon Matthew C Funk WD County Jonathan Woods and myself is FREE! Pick it up while you can.

Congrats Nighty Night. You should celebrate.

I have just released a new EP called The Recognitions and I would be happy if someone listened.

I will celebrate. With rum. Rum for everyone.

The Metaphysics of Ocean Water is a great song.