But - milk stout with A Clockwork Orange!? NO!!

The only drink for that book is vodka straight from the freezer in an iced glass.

On the beer front, a crisp lager goes well with a tense thriller (Michael Connelly or Dennis Lehane).

Which drinks go with which books for you?

Drinking makes me want to do things other than read.

Class Facilitator
ReneeAPickup from Southern California is reading Wanderers by Chuck Wendig May 14, 2013 - 9:38am

THose are pretty cool. Just last night the Bang and I were pipe dreaming about owning a brewery, and I had said I'd name all the beers after books/authors, I came up with Hemingway Stout and Mary Had a Little Lambic... haha.

RAP --- There's an adult pun I could make concerning your hard cider offering.

Class Facilitator
ReneeAPickup from Southern California is reading Wanderers by Chuck Wendig May 14, 2013 - 9:41am

All the better! We were also giggling over the letter Hemingway wrote that said the title of his book was "The Sun Also Rises-- Like Your Cock If You Have One!" but I couldn't work that into a beer name.

Dwayne from Cincinnati, Ohio (suburbs) is reading books that rotate to often to keep this updated May 16, 2013 - 12:22pm

I'd like to open a vineyard/restaurant combo that is popular around here. and name my wines things drunks really want.


Wine or Brandy if I'm drinking and reading.

Dwayne from Cincinnati, Ohio (suburbs) is reading books that rotate to often to keep this updated May 16, 2013 - 3:34pm

@Jacks - Have you tried any of those combo places? I don't know if they are as popular up towards Louisville.

@Dwayne: I have not. I haven't even wrote in a coffee shop yet. It's mostly dive bars for me. Though I'm trying to gravitate more towards a pension for wine and other alcohol snobbery I can muster.

Mess_Jess from Sydney, Australia, living in Toronto, Canada is reading Perfect by Rachael Joyce May 16, 2013 - 6:02pm

Ah, Dwayne. You always give me a laugh.

Like JY, I tend not to drink when I read, because it makes me want to go out and dance, listen to bands, take drugs, drink to excess, make inappropriate decisions etc. A cup of tea is usually my poison with a book!

Dwayne from Cincinnati, Ohio (suburbs) is reading books that rotate to often to keep this updated May 16, 2013 - 6:39pm

I'm just glad someone got it, much less thought it was funny.

I love drinking and reading. Drinking alone gets a bad rap but I personally find that I am always drinking alone, whether I do it in public, at a bar, or private, in my apartment.

I love a good pilsner, but I am pretty jaded as to what constitutes a good pilsner. Presidente has spoiled me, those Dominican bastards.

Courtney from the Midwest is reading Monkey: A Journey to the West and a thousand college textbooks May 18, 2013 - 10:49am

If I drink, it's a glass of wine (the 4.99 gas station bottles or the 14.99 boxes, usually) while I crochet and watch Law and Order, because I am a bad ass. I don't know how reading would factor into that.

Haha Dwayne - I love that idea too :)

Not being a drinker at all, the only thing I can add to this discussion is... penchant.

Dwayne from Cincinnati, Ohio (suburbs) is reading books that rotate to often to keep this updated May 20, 2013 - 10:46am

I'd have to add the vintage 'reasonable internet posts'.

Three floyds is an awesome brewery. You're a lucky person if you can get their beers where you are (only around Chicago).

So there's "steampunk," and there are sub-steampunk genres such as "dieselpunk". Now there's a beer called "Dieselpunk." It's just a beer. There are three varieties of it. Its website is a single page with a few "flavor notes" and a dreamy paragraph about some bullshit. It's just a beer. Since when do people name beers after artistic/stylistic subgenres? Is there a wine called "Shoegazer"? A coffee named "Imagist"? Is this not as weird as I think it is? I know a lot of micros have weird names, but this seemed—I don't know—mentionable.

Craft breweries put a lot into their beer, making most of it more than "just beer". Someone who really enjoys a good, widely marketed American lager isn't going to enjoy craft beers and vice verse (obviously there are exceptions). The other side of it is, most craft brewers start out as home brewers and move up to micro brewing, so they get really into the label design and the ideas that inspire their beer, so that's why you'll find breweries and beers with names related to totally non beer related topics, and fun beer descriptions. For these guys it's about having fun and creating something they love.

i mean, I had dinner last night at a gourmet burger joint with a heavy metal theme, and while the burgers were, in my opinion, ridiculously good, most people wouldn't do a gourmet burger joint or a metal themed restaurant, but for the people who owned this place, it was obvious that they put together things they really loved to create something unique. I think that's pretty cool.

If you're ever in Chicago, check out Kuma's Corner. It's one of those places, metal and burgers and beer. Never been there myself, but it's legendary among most all of my friends from up there.

Yeah, good point, Renee. People should do what they want. I guess I was thinking that a subgenre name might carry more potentially negative associations than, for instance, Duck-Rabbit or Six-Point. Probably over-thinking it, though. The beer is good. I bought it even though I thought it was silly. I consciously overruled my distaste for their branding.

I've been to Kuma's Corner, it's quite an experience. We were there when they opened and metal was playing loudly and it's a small place (six tables and a bar) so it fills with smoke pretty quickly. The burgers are all named after metal bands and are giant burgers and the waitresses have metal nicknames. The line out the door starts when the open until about 2am. Also they only serve whiskey and craft beer. It's worth it if you're in the area.

Class Facilitator
ReneeAPickup from Southern California is reading Wanderers by Chuck Wendig May 23, 2013 - 8:47am

I always forget there are still places you can smoke and eat in the US. This place did insane burgers, like mine had brie and a bourbon apple compote on it. We just randomly found it because we pulled off the freeway into an area that was like a Little Vietnam, and we were trying to find a place to eat my three year old would tolerate, so I found them on the GPS, and when we went inside it was awesome (The 3 year old had a plain cheeseburger).

But that Kuma's Corner sounds cool, too. I didn't know heavy metal burger joints were a "thing".

Dwayne from Cincinnati, Ohio (suburbs) is reading books that rotate to often to keep this updated May 23, 2013 - 3:23pm

Kentucky is all about trying to loose the red neck rep so it is often towards the front of the band wagon on things like the no smoking bans. I went to a town I seldom go to, Danville, and it was like a time warp when the waitress asked, "smoking or non?" I think I might go try some of the local Bourbon Barrel beer, but it seems like cheating.

I had this last weekend (Rogue's Shakespeare Stout) and it made me think of this thread. It was so good. Lately I've been really getting into stouts. My favorite is Dragon Milk. It's a bourbon barrel stout. So good.

But when it comes to drinking and reading, I either have a Manhattan or a lighter beer (but not much lighter) Short's Brewery's Belle Aire Brown (which is also probably my favorite any time beer). 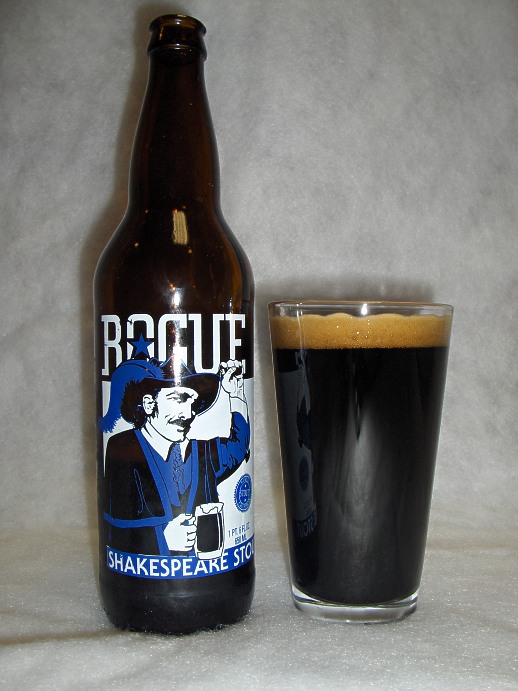 Had this one over the weekend. It's brewed in Holland, MI. At first I wasn't sure if I liked it. But it grew on me. I'll be picking it up again. 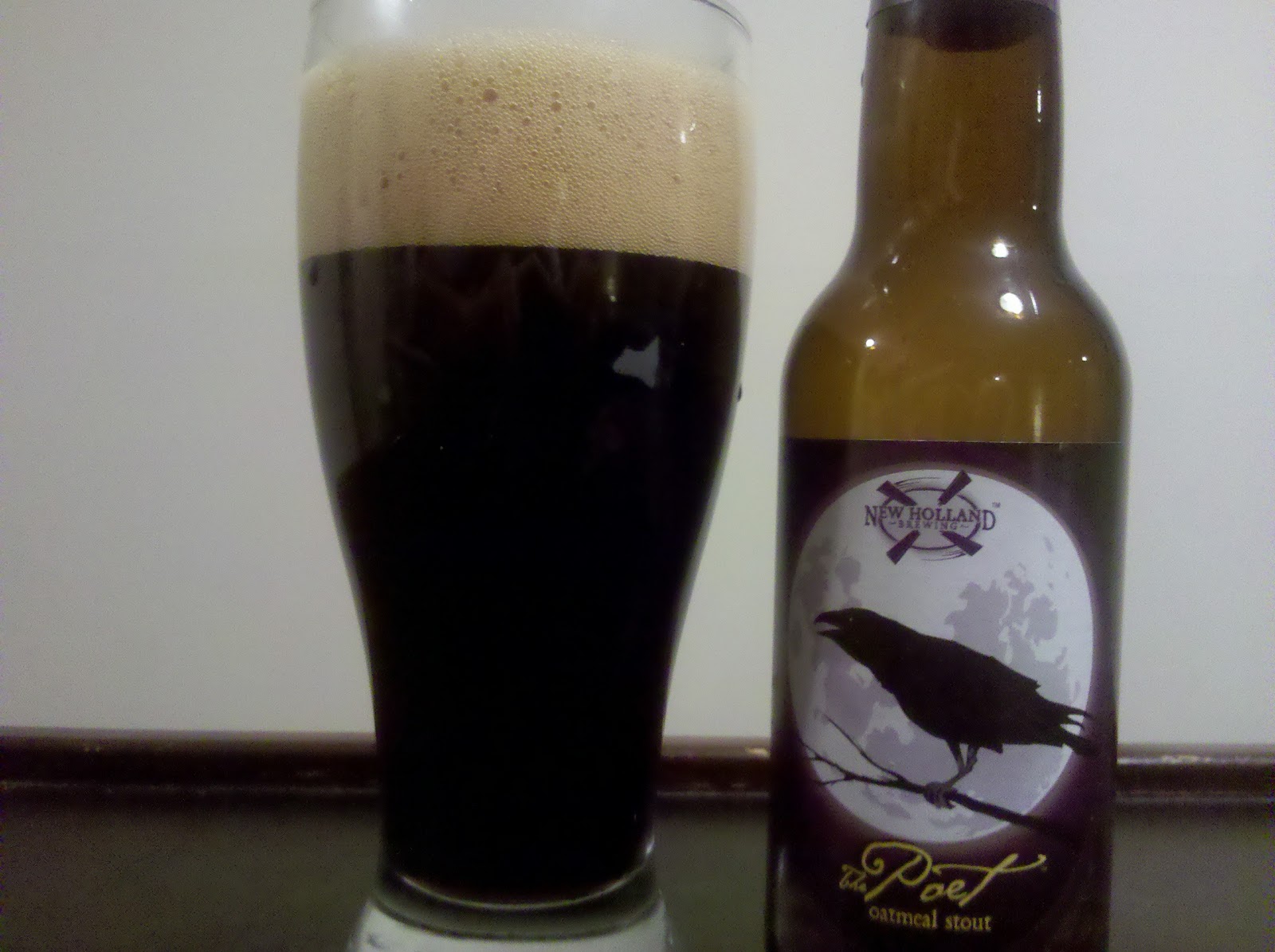 Did someone say literary beers? My ears just perked up.

I'm a guiness fan. The darker the brew the better.

Second, some of you may know that I have a book themed YouTube channel. Fewer of you know that I also maintain a Tumblr page called Books Go Where? which catalogs various references to books found in places where books don't normally go (cartoons, sitcoms, and yes, beer). Some of you may also know that I love beer. Sometimes, these various interests and mediums converge.

(stay with me, I have a point)

I'm kicking around some ideas for an upcoming video. I want to showcase some book inspired beers (beer names, more appropriately). I'm wondering the best way to do it. So far, I'm thinking:

1. Beer vs. Book: I (along with a friend, probably; two people are often more fun to watch than one) read a few lines from a book while drinking its inspired book. Then, we dicuss, humorously. I wouldn't anticipate actual winners, as books and beer are completely different, but it's a fun excuse to drink and talk books.

2. Bukowski or Brewski (or some other author): I read a name and the other person has to guess if it's the name of a Bukowski poem or a beer. It would be similar to this Stephen King Plot or Adult Swim Show video that me and fellow Lit Reactorite Gordon Highland made).

3. Book and Beer Pairings: take the pompous wine snobbery of food and wine pairings to the world of books and beer. Yeah, it's been done, but again, it's a good excuse to drink and talk books.

Fairly certain that no matter the color, flavor, or year, "get laid" would top the sales.  Among men, anyway.

Dwayne from Cincinnati, Ohio (suburbs) is reading books that rotate to often to keep this updated April 19, 2014 - 1:27am

That would more be the name of wine they buy for ladies.

Don't know about literary, but I love Amstel Light. More because I haven't been able to find regular Amstel here. I also really love Guiness.

So basically if Tom Sawyer were a beer, and you had the book you would review both?O_o Okie doke then.

@Sarah W. : We have both here! Guiness on draught is best though.

@Dwayne: good call! I think "Whiskey Dick" should be added to your pantheon of beers. (please excuse the language, sir.)

Dwayne from Cincinnati, Ohio (suburbs) is reading books that rotate to often to keep this updated April 20, 2014 - 12:01am

I haven't seen Amstel Light in a long time.

@justforwords, honestly, not for a while. I watched about everything on the channel back when Aqua Teen Hunger Force first started. I haven't seen much in about 10 years.

@Caleb  You must have been hard at work then!