'One Kick' by Chelsea Cain 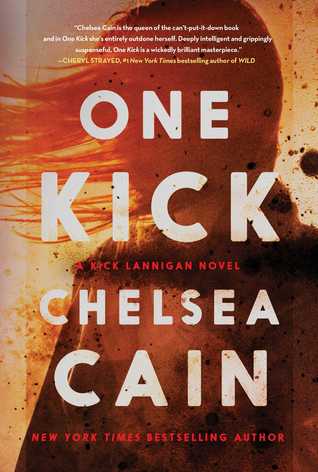 Synopsis: Famously kidnapped at age six, Kick captured America’s hearts when she was rescued five years later. Now, twenty-one, she finds herself unexpectedly entangled in a missing child case that will put her talents to the test.

Trained as a marksman, lock picker, escape artist and bomb maker by her abductor, Kick could not return to the life of the average young girl after her release. So, in lieu of therapy, she mastered martial arts, boxing, and knife throwing; learned how to escape from the trunk of a car, jimmy a pair of handcuffs, and walk without making a sound—all before she was thirteen.

Kick has trained herself to be safe. But then two children go missing in three weeks, and an enigmatic and wealthy former weapons dealer approaches her with a proposition. John Bishop uses his fortune and contacts to track down missing children. Not only is he convinced Kick can help recover the two children—he won’t take no for an answer.

With lives hanging in the balance, Kick is set to be the crusader she has always imagined herself. Little does she know that the answers she and Bishop seek are hidden in one of the few places she doesn’t want to navigate—the dark corners of her own mind.

Author: Chelsea Cain is the author of the New York Times bestselling Archie Sheridan/Gretchen Lowell thrillers Heartsick, Sweetheart, Evil at Heart, The Night Season, Kill You Twice, and Let Me Go. Her Portland-based thrillers have been published in twenty-four languages, recommended on the Today show, appeared in episodes of HBO’s True Blood and ABC’s Castle, and included in NPR’s list of the top 100 thrillers ever written. According to Booklist, “Popular entertainment just doesn’t get much better than this.” Visit her online at ChelseaCain.com.

I love the Archie and Gretchen books. Chelsea has such an easy writing style. Every time I pick up one of her books, I end up sitting there reading way longer than I meant to. 5 minutes turns into a couple hours. So when I saw that she was starting a new series, I was sad to maybe be saying "goodbye" to Gretchen and Archie, but happy to see what new place she may be bringing us. Hopefully you guys love her style as much as I do.

Read our interview with Chelsea Here

I know I should have started reading already - but I'm gonna start today. I can usually finish one of her books in a few days. So I'll be posting within a week - hopefully.

Class Director
Rob from New York City is reading at a fast enough pace it would be cumbersome to update this June 2, 2015 - 1:54pm

I loved this book. Chelsea nails this great marriage between literary thoughtfullness and pulp sensibility.

She's also an underwriter, which makes me very happy.

For years I've done this thing where my first drafts of things are always short--like throwing up scaffolding--and then I go in there and flesh it out, add the wiring, drywall, etc.

But everyone else is always talking about how they end up with these massive drafts they have to cut down, and I was wondering if I was writing wrong.

Than Chelsea told me she did the same thing. Underwriting. Made me feel so much better. Seriously.

I did a really fun interview with her for the site.

Also, Pete, I won't say anything about the ending until you're done, because I'd love to talk about it... but damn that ending.

If other people come in, feel free to disuss the ending. I'll just stay out of it until then.

Or you can label it SPOILERS.

I would like to talk about this "underwriting" thing though. I think that's basically how I write. My first draft for a short story might only be a page and a half, maybe 2 pages. And I slowly think of things to add and flesh it out. And then I might edit it down a bit from there. But I guess I'm just not a very linear writer.

Class Director
Rob from New York City is reading at a fast enough pace it would be cumbersome to update this June 2, 2015 - 5:34pm

The first draft of my second book was 52K words. Right now it's at 70K, and I'm still waiting for editorial notes (I expect, if anything, my editor might ask me to flesh stuff out rather than cut).

Underwriting is fun! But this was also the first book I went into with a tight outline I had worked over a few times. So I already knew where I was going, rather than feeling it out.

Hooray for underwriters! I am definitely an underwriter, everything I write starts off bare bones and then grows as I edit. Don't think I could ever overwrite.

I think maybe you can see the effect of underwriting in Chelsea's writing, one of the things I loved about this book was everything was so necessary. No waffle or padding, everything just sharp and vital, if you know what I mean.

I'm a fan of Chelsea's ~ I am one book away from ending her last series before I start this one... *can't wait*

I think we need to start a topic on underwriting. Looks very interesting.

Just finished it. And I loved it. I can't wait for the second one to come out now. Like the Archie/Gretchen series, I can see myself collecting all of this one as well.

Come on guys - get in here.

Rob - what did you want to say about the ending?

And sometimes I get these "doh" moments. Like when a gun is hidden in plane sight and I KNOW that it's going to be brought up again and then when it is brought up - I'm totally taken by surprise. There were a few moments like that. The most obvious one was the figure / ring.

Class Director
Rob from New York City is reading at a fast enough pace it would be cumbersome to update this June 10, 2015 - 8:59am

So--the ending--seems it was very divisive, because of Kick's decision to save her former captor.

And it's a tough decision to make. Why would you want do that for someone who did something so terrible to you?! But it's HER decision to make, and I feel like it made perfect sense within the context of the story.

But yeah, a lot of people got all jammed up by that. I loved it.

I thought that decision was perfect. There are so many reasons to go ahead and save him, psychologically and practically.

And psychologically - she's proven time and time again that he's fucked up her head so much that she can't help but feel love for him. She thinks of him often and even got that memory with him and her real father mixed up. So it makes sense for this reason alone. Also if you're given a choice to save somebody or let them die, how hard would it be to say - "fuck it, let them die" - no matter who the person is?

^^Agreed. I also saw people commenting that kick was an unlikable character. I didn't get that at all.

Class Director
Rob from New York City is reading at a fast enough pace it would be cumbersome to update this June 15, 2015 - 10:00am

That term, "likable"--is interesting to me.

She's smart and capable and different and interesting. But she also had a hard life so, completely reasonably, doesn't always come off very nice.

That to me is likable.

Maybe those people who thought she wasn't likable were looking for someone to do a happy dance and be their friend and pat them on the head?

Oh yeah, things like that are what make a character likable to me, I prefer flaws, emotions, anger, irrational behaviour and mistakes any day. More realistic, more empathetic, yes? After all people are a complexed mix of all these things, so why shouldn't a character be.