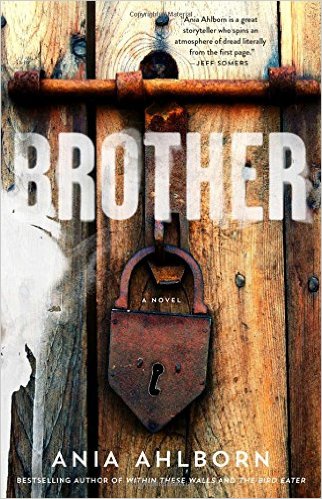 Synopsis: Deep in the heart of Appalachia stands a crooked farmhouse miles from any road. The Morrows keep to themselves, and it’s served them well so far. When girls go missing off the side of the highway, the cops don’t knock on their door. Which is a good thing, seeing as to what’s buried in the Morrows’ backyard.

But nineteen-year-old Michael Morrow isn’t like the rest of his family. He doesn’t take pleasure in the screams that echo through the trees. Michael pines for normalcy, and he’s sure that someday he’ll see the world beyond West Virginia. When he meets Alice, a pretty girl working at a record shop in the small nearby town of Dahlia, he’s immediately smitten. For a moment, he nearly forgets about the monster he’s become. But his brother, Rebel, is all too eager to remind Michael of his place…

Author: Ania Ahlborn is the bestselling author of the horror thrillers Within These Walls, The Bird Eater, The Shuddering, The Neighbors, and Seed, which has been optioned for film. Born in Ciechanow, Poland, she lives in Portland, Oregon, with her husband and their dog. Visit AniaAhlborn.com.

I had never heard of the author, Ania Ahlborn, or this book before. But then a few people recommended it to me. And I read up on it. It sounds exactly like the type of story I usually love. So I read the first few pages on Amazon, and yeah the writiing is solid. So it was a no brainer to try and get more people to check it out. With the buzz I'm hearing about this one, I think you guys will enjoy it.

This book...wow. Loved it! January can't get here soon enough. If you haven't read it, get a copy in your hands now. It's worth every penny.

Joshua Chaplinsky from New York is reading a lot more during the quarantine December 5, 2015 - 8:09pm

If you haven't seen, we're giving away some audiobook copies, and some eBook versions of another of her books: https://litreactor.com/news/giveaway-brother-and-the-pretty-ones-by-ania...

I finished this book last night. Holy sweet Squid... it's one of THOSE books. I don't want to go into too much detail until Friday, but... yeah. Wow.

5 days into January, and no one is talking about this book yet? Hmm. I want to discuss it, but I don't want to ruin any plot points. So, I suppose I'll do this instead:
I'm one of those nerds that reads the comments (I'm sure I'm not the only one that frequents this site...). The author noted in hers that it wasn't Texas Chainsaw Massacre, but a little known flick called Chained that inspired the book. Because the text knocked me on my ass after ripping through the sonofabitch (I only had about 5 days to read it, but it was no problem as I flew through the final 250 pages in about 6 hours), I figured I'd check out the movie that inspired the book. It's directed by Jennifer Lynch, daughter of David Lynch, so already it's got some cred. I rented it from the local video shop, and after watching it, you can deinitely tell which parts Ahlborn drew the most inspiration from. And though it's normally said, it's never said in this context (book inspired by movie, not movie based on book), the book is MUCH more satisfying that the movie. But it might be because of the endings. Holy SHIT the ending of the book is a gut punch. And that's coming after the rest of the shenanigans that go on in the meat (pun not intended) of the text.

Benjamin, I literally just finished it.  I. . . yeah.  Ania does not disappoint.

Joshua Chaplinsky from New York is reading a lot more during the quarantine January 9, 2016 - 12:29pm

Jennifer Lynch is a lady.

Okay, by this time, if you haven't read the book, consider yourself warned. Beyond this point there be spoilers!

One of the things I truly love about this book is how music plays such a part in Michael's life, a lot of which he discovers from his sister, and also by Alice later in the story. Here you have a young man, about as isolated as one can be, both in location and in emotional development, yet that teen angst is still tied into the music of that era, such a univeral feeling, which was a huge plus for me while reading the story because I grew up around that time. The music in the 80's was unforgetable, timeless to those who lived during those years. Yet, I still find it strange that, considering the setting of the story, that the British New Wave music was making its way into those remote, rural area. You'd think it would be country music...I'd assume it would be country music, as I'm from the South, and growing up I was one of those rare 'rockers' in school. Everyone else wearing Wranglers and cowboy boots, I'm wearing Vans and concert t-shirts. It's easy to assume that it would be country and western music they would be grooving too, so maybe I'm just grateful that it wasn't, but I also wonder if that music wasn't the first choice. How different would the story be if they were listening to nothing but George Strait and Hank Jr? A bloody spin on 'Family Tradition'? Music is truly universal, is it not?

The story seems to be inspired by the countless redneck/cannibal stories through the years, but the angle, the perspective, is something that we've never seen before: a victim of such a family who is as terrible as his captors, yet knows this isn't how things are supposed to be. A victim forced to do wrong, and I LOVE those kind of stories. Of course, after reading it, it's so easy to imagine how the writing process went. Theme is something applied later, after the first drafts, when the story is shaped but still a little wet behind the ears. Theme is rarely the first thing in a story. So I guess I love that this was a story about people who we come to care about, set against the backdrop of the worse of the redneck/cannibal familes, and it manages to rise above that into something truly scary. I'm rambling now, so I'll leave this to others. Might have some more thoughts later, but YES...great book, LOVED it!