Books & Authors : February '15 - Book Club Selection - 'Our Love Will Go the Way of the Salmon' by Cameron Pierce

Jun 22 : Write Your Way Out of a Rut with Arya Samuelson
Jul 8 : Fleshing Out the Hero with Zoraida Córdova
Jul 12 : Keep it Brief with Richard Thomas
Jul 15 : Logic and the Unconscious: How to Write Like a Maniac, Then Like an Engineer
Jul 20 : Revision from the Inside-Out with Arya Samuelson
Jul 27 : Magical Realism with Francesca Lia Block
Aug 3 : Writing the Weird with JS Breukelaar
Aug 10 : Monster Mash with Gwendolyn Kiste
Sep 9 : The Business of Creative Writing with Lisa Bubert 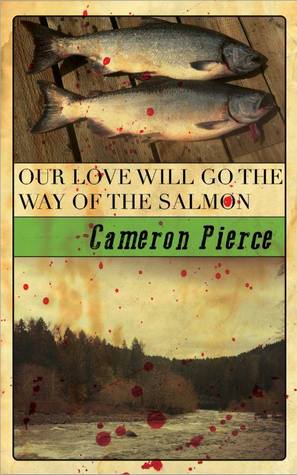 Author: Cameron Pierce is the author of eleven books, including the Wonderland Book Award-winning collection Lost in Cat Brain Land. His work has appeared in The Barcelona Review, Gray's Sporting Journal, Hobart, The Big Click, and Vol. I Brooklyn, and has been reviewed and featured on Comedy Central and The Guardian. He was also the author of the column Fishing and Beer, where he interviewed acclaimed angler Bill Dance and John Lurie of Fishing with John. Pierce is the head editor of Lazy Fascist Press and has edited three anthologies, including The Best Bizarro Fiction of the Decade. He lives with his wife in Astoria, Oregon.

I've always really admired Cameron. He has made Lazy Fascist Press into something that people recognize. His books and the books he publishes are often a person's introduction into the bizarro genre. And what he chooses to print is accessible to all - whether you like extreme bizarro or just like literature in general.

I've corresponded with him quite a few times and he's always been super cool. So I'm really excited to be hosting one of his books here. With a themed short story collection, they can be hit or miss. I have a feeling this is more of the former than latter. I hope you all enjoy this one.

Purchase OUR LOVE WILL GO THE WAY OF THE SALMON Here

So this is where we announce our participation?

Thanks for the kind introduction, Pete, and thank you to everyone for having me here. I hope you enjoy Our Love Will Go the Way of the Salmon. I'll be in transit to South Africa when discussion kicks off on February 1st, but once I'm settled there, I plan on hanging out here all month to answer questions and talk about anything you'd like to discuss, whether it's the book, publishing in general, fishing, or something else entirely.

Was wondering what inspired this against your more bizarro works? I mean obviously the absurd still exists in some of these stories, but seems more literarary based. Was wondering if your personal life influenced it, career change ideas or what have you.

Man this was a great collection. I've been having a hard time getting into short story collections lately. And I admit that I was nervous to jump into a fish themed one - I mean, how many places could we go with fish stories?

But I really enjoyed these stories quite a bit.

And he really did find so many places to go with these stories. There were real world stories with tons of emotion and there were bizarro / funny stories, and then there were the super creepy weird stories. I can honestly say that there are probably at least a few stories in here that everybody will love.

I meant to spend more time reading this so I could think about each story a bit, but I kept wanting to read the next thing in there. So, yeah, I finished it in a day.

Hey Jay, I'd written a Godzilla-sized paragraph in response to your question, but I don't know where it's gone off to. I'd guess that the difference lies in a little of all those things. A lot of factors played a role in the development of Our Love Will Go the Way of the Salmon. For starters, I went into it knowing I was working on a collection. Lost in Cat Brain Land and Die You Doughnut Bastards were almost accidental in that I didn't know I had a collection on my hands until they were almost complete. I had a pretty clear idea of what I wanted Salmon to be before the first story was written, and I just continued whittling away at the book until it resembled the version in my head.

Brautigan, Lovecraft, and Kafka remain three of the authors I return to most often, but I guess I might be reading them for different reasons than I used to. I've also always wanted to pay tribute to this collection, How I Came to Know Fish by Ota Pavel, which I discovered when I was nineteen or twenty. It's a great book. One of my absolute favorites. In a way, that book is the reason for this collection. That book and Brautigan's Trout Fishing in America, which has remained close to me since I was sixteen. But my fishing book has monsters in it because I can't help myself. Some authors I was exposed to for the first time while writing Salmon also had a marked impact on me. Barry Hannah is the first of those to come to mind. Also Annie Proulx's incredibly creepy "The Wer-Trout," which just might be the best fishing short story ever written.

Lifewise, there were shifts too. Not long after we were married, my wife drew a cartoon of our five year plan on a post-it note. She stuck it on the fridge and it remained there until we moved out of our first apartment, but we stuck to the five year plan. We bought our first house last year and our first baby is due this April. I'm sure that post-it had an impact on the book.

Wow, thanks for the kind words, Pete. That means a lot. So far, it seems like the book is being enjoyed equally by hardcore anglers and people with little to no interest in fish, which I'd hoped would be the case. There's a long history of fishing in literature, and I think the stories will keep on coming because anywhere there's a person scouring the ocean depths or scanning a crystal-clear creek for trout, there is mystery and desire. Anything can happen on any given fishing trip, and in any given fishing story. You might come across a dead body, like the anglers do in Raymond Carver's "So Much Water So Close To Home," or you might unexpectedly find yourself battling a large guitarfish during a lightning storm, which happened to me during an excursion to mouth of the Great Fish River just last week.

I'm not a fisherman. So when I hear fish themed, my brain didn't think like that. ;)

Oh - I also meant to ask in my post, but totally forgot - Were all of the stories based in the same world, or just a few?

CameronPierce from Astoria, Oregon is reading Repo Shark by Cody Goodfellow February 16, 2015 - 9:56am

The majority take place up and down the west coast. A few of the stories are linked by the presence of that terrifying fish with blue eyes and human hands, and the histories of several characters overlap, but other stories, like "The Snakes of Boring," are sort of based in their own world. I can't imagine the rocket launcher antics and the bank robbery by snakes being logical or sound beyond that particular story, although I'd like to revisit their world someday.