Mar 3 : The Craft of Character with David Corbett
Mar 10 : The First Five Pages with Lauren Spieller
Mar 17 : Kill City Blues: Writing Dark Urban Fantasy with Richard Kadrey
Mar 24 : Fundamentals of Short Fiction with Steve Weddle
Apr 7 : Anatomy of the Novel with Susan DeFreitas
Apr 14 : Fairy Tales As Inspiration with Francesca Lia Block
Apr 21 : Grammar 102 with Taylor Houston
Apr 28 : Writing About Relationships with Chloe Caldwell
May 5 : Logic and the Unconscious: How to Write Like a Maniac, Then Like an Engineer
May 12 : Say It Like You Mean It: 10 Days to Better Dialogue with Suzy Vitello

So I know that several of us have been talking about our collections, and since I'm sure most of us can't afford to run out and spend $1,000 on a first edition, first printing of Blood Meridian by Cormac McCarthy, why not swap some books? Obviously, this is about trust, but I think most of us here know each other, and are comfortable with this. If you aren't a regular here, well...it may not work But Dino, Renee, Sarah I'm 100% cool swapping with you guys.

I guess the idea is, post up any books you might want to swap, and then we can have open (and private) discussions about price, value, and a good swap. Sound like fun? YES

NOTE: When we say first edition, we mean first edition, first printing. ALWAYS. If what you have is any other printing, or you aren't sure, speak up. Also, condition (especially dust jackets) is always important. Make sure if you say LIKE NEW or FINE or VERY GOOD or GOOD that you know what you mean. There is a scale and system for it:

I'm attaching a PDF of my Stephen King collection, since it's so huge. It's not 100% accurate, but it's pretty close. In addition to that, I also have a lot of 1sts, and even signed copies, of books by Chuck Palahniuk, Will Christopher Baer, Craig Clevenger, and some Stephen Graham Jones. So, take a peek. Obviously, most of what I'm offering up is the King stuff—US firsts, UK firsts, signed copies, rare anthologies, first stories in magazines, and foreign editions.

I'm LOOKING for 1sts of Hell's Angels by Hunter S. Thompson, American Psycho (US or UK) by Bret Easton Ellis, and maybe Cormac McCarthy, but his stuff is getting expensive.

Is that Dark Half UK the hardcover or the ARC?

ETA: I collect Dark Half specifically in addition to my other stuff, so I have the US First, UK ARC, some foriegn film posters. Would be interested in buying or swapping for UK First, US ARC, mass market paperbacks with FINE covers and bindings of the different covers, and almost any of the promo materials (I know of sparrow masks and a bag of birdseed, desperately want both, movie posters, etc).

Richard, you just made me fall off the wagon. I hope you're happy.

I have a few Dark Half books. I have the UK first in hardcover. Let me see what else I have in paperback. I also have, and this is one of my absolue favorites, The Dark Half from JAPAN. It's this MC Escher pattern over several books. It's absolutely gorgeous, and impossible to find, especially all four. I'll have to take a picture of it for you. I'll dig around downstairs to see what other weird versions I have. :-) Well, if we're off the wagon, at least we're not alone.

okay, i checked out my stash of King, and here's what i have:

Signet paperback, 1st edition US, in what I'd call GOOD condition. some bent corners. probably not nice enough for you.

Hodder and Stoughton, UK hardcover 1st edition in VG+ or FINE, just some minor wrinkling at the edges.

AND finally, the two Japanese paperbacks (not sure on publisher) in plastic, and what looks to be FINE condition. these are very cool SO HARD to find in the US.

These are all actual scans. The US PB is standard size, the UK is large, like 6.25x9.5 and the Japanese are small, like 4x5 each.

PM me if you're interested in any of them, Renee. We can talk $$$ or swap! :-) I thought for sure I had other countries, but I guess not. Mostly I aimed for the bigger titles when buying foreign editions.

You know you're swapping with everyone else they've swapped with. Practice safe swapping.

Seriously though, this is cool.

Lol. It provides the fix of acquiring something cool, getting that PACKAGE in my BOX, without having to spend all that cash! :-)

Or, if you prefer to pay for your entertainment, that can be arranged.

But seriously, I figured lots of people have books here. Some may have some they're sick of, or maybe they have doubles, or they want something else more. Like, I had no idea that Renee had a thing for THE DARK HALF! I mean how cool is that.

I went through a phase where I started collecting the Japanese King titles. I saw a few on Ebay and they were just so weird, and the art was really cool. A friend (back at The Cult) actually went on a TRIP to Japan, and I gave her $50 and said, "Get whatever you can that's cool." She brought back six. Lots of fun. I think I have maybe 20 Japanese King titles, including this wild hardcover of THE GUNSLINGER 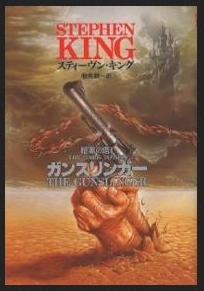 I'm with you, it's cool to see different cultural interpretations of cover art.  Very cool thing to collect.

Funny, but when LR first started my screenname was SparrowStark. It was my blatant reference to The Dark Half and I think maybe only one person "got it" without prompting. Definitely not one of the most popular King titles. But I love it.

I like this idea. I have some collections but not Steven King. Was a member of first editions clubs with two Mississippi bookstores for a while. Goood stuff. But oh my I need to get back to writing.Ive been putting it off.

Richard-- my dog's name is Beaumont, too (Thad Beaumont).

Cove -- I think we all collect more than King, got anything you want to let go?

Richard ~ did you say you had signed Baer books?

yes, Cove, we swap more than King for sure.

Em, I have a few signed Baer's. Just sold a whole set to a friend of mine. They are REALLY hard to find. PM me if you're interested, we can talk swap or $$$.

I was browsing in the used book store on my lunch break today, and saw they had received a huge pile of old SF mags. There are copies of Fantasy & Science Fiction, Galaxy SF, and several others. All from about 1972 to 1978. I saw Heinlein and Zelazny and some other big names on the spines. I didn't have time to dig through the whole box, but if anyone is interested in any, PM me a list of what you're looking for and I can go back and take a closer look. He had them priced from $3-5 apiece, but said he would go lower for me, since I'm a good customer.

Nice! I wish we had more/better used bookstores here. We've got Half-Price Books, which is great for a chain, but I've yet to find any good local ones. Well, other than one in downtown Fort Worth that's got really weird hours and I haven't had a chance to check out.

Our used bookstores are dropping like flies. One closed a few months ago, and another just last week. We've got one cheap-used-paperback store and one rare book store left. These mags are at the rare book store, which is very dangerously located one block from my office. I try to go in at least twice a month!

I hate that we live in such a corporate world. Unique small bookstores are so great, showcasing individual taste and local color. Sucks. But good on you for being a regular! I used to do better back in California, but I still sort of don't know where anything is out here.

very cool. i picked up about five hardcover 1st/1sts by Bradbury and Heinlein at a recent library sale. i miss my old bookstores in Wicker Park—Quimby's (for new) and Myopic (for used)

We just have a B&N for new, here--well, 20 min drive away. But I'm lucky that I can get to Denver, Boulder, or FoCo in under an hour, and all three places have amazing bookstores. Tattered Cover and Boulder Bookstore could both have my soul if they asked.

If you guys are ever in Nashville! visit Parnassus. A local book rep who ismy friend opened it with Ann Patchett. Ann wanted to live on a town with an independent bookstore. When Davis Kidd, our local bookstore went under becUse it was bought by. Small chain, Karen Nd Ann opened Parnassus. I love them for it!