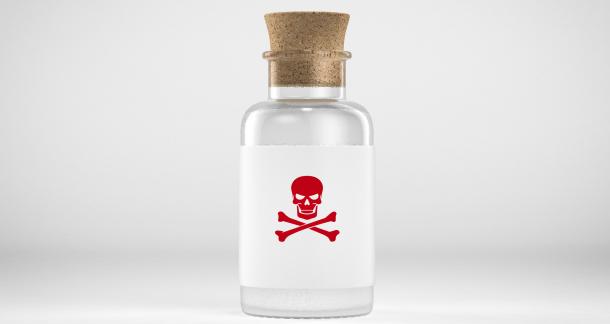 Give me a decent bottle of poison and I’ll construct the perfect crime. — Agatha Christie

The victim in your latest crime manuscript slips under the bedsheets after drinking a nightcap of cognac, hot water and honey. Unbeknownst to her, the cocktail has been laced with cyanide by her jilted lover. How long before the poison takes effect? How much cyanide would be required for a fatal dose? Does she slip quietly into the afterlife, or convulse violently in agony for hours? Will the poison be detectable in an autopsy?

When writing about poisoning in crime fiction, these are the types of questions you'll likely have. Toxicology is a complex science and there are a multitude of dangerous drugs, toxins and venoms around us. This article is a guide to help you focus your research and answer these questions if you're planning on killing your darlings with poison.

It can be tempting to choose exotic toxic flowers and rare spider venoms to kill your victims, but sometimes simplicity can be the best answer.

'Poison' is an informal term used to describe any substance that can cause death when introduced to the human body. This means snake venom, paint thinner, fentanyl and plutonium are all considered poisons. The possibilities for killing your characters with poison are nearly limitless given the large number of them in our world. But with endless possibilities comes an incredibly wide scope of research. Your first step in narrowing things down will be to choose a poison that suits your manuscript needs.

Availability should always factor into your choice. It would be difficult for a common thug or a jealous spouse to get their hands on a dose of ricin, a vial of cyanide or a nugget of Polonium-210. That’s why most cases of criminal poisoning in North America involve household chemicals or forced overdoses of common medications. Ethylene glycol, or antifreeze, is a dangerous weapon that can be purchased at the gas station. It tastes sweet and can kill even in small doses. Life-saving insulin is found in every diabetic's medicine cabinet, but a high dose injection can easily be fatal. It can be tempting to choose exotic toxic flowers and rare spider venoms to kill your victims, but sometimes simplicity can be the best answer. Unless your villain is a botanist or a chemical engineer...

Dose is also an important consideration. The cyanide in the tea cup above might cause near instant death if the amount is high enough. But if the killer underestimates the dose, the victim may only suffer from headaches, vertigo and difficulty breathing. Make sure that a fatal dose of the poison you choose can reasonably fit into the vessel in which it is consumed. A chart of median lethal doses of common poisons can be found here.

Work on Your Delivery

The method of introducing the poison into the fictional victim is often more interesting than the poison itself. In 1978, Bulgarian secret police killed dissident novelist Georgi Markov at a bus stop by injecting ricin into his calf using an umbrella-gun. You can’t make this stuff up. Don't be afraid to get creative with how the poison is introduced to the victim. Imagine adding strychnine to your victim's contact solution. Or as fiction blogger Michele Acker suggests, using honey made by bees who have been fed on poisonous plants, or slipping a toxic mushroom into their salad. Think outside the box and your manuscript will benefit from it.

The burden of determining the cause of death in a murder falls with the coroner or medical examiner. With recent advances in forensic and medical technology, very few poisons remain undetectable. Toxicologists may not be able to find traces of the actual poison in the victim after it breaks down, but they will find chemicals and compounds that result when the human body metabolizes a particular toxin. During an autopsy, technicians may also notice specific changes in the liver, kidneys or intestines of the victim as a result of the poison. Colour changes in body parts, damage to certain organs and trace elements of specific chemicals are all tell-tale signs of different poisons. The days of detectives being baffled by sudden deaths as a result of untraceable poisons are long gone. That isn't to say that mystery toxins don't exist, but they are becoming exceedingly rare. For more on toxicology, check out Chapter 11 of my go-to book on this: Forensics for Writers. And don't forget, if you have a specific question about toxicology that you can't find an answer for, you can always ask a toxicologist directly.

Fake It Until You Make It

If you can't find a suitable poison in your research that meets the needs of your plot, don't be afraid to make one up. There’s no shortage of phony toxins in fiction: meta-cyanide in Frank Herbert’s Dune, nightlock in The Hunger Games, and ice-nine from Vonnegut’s Cat’s Cradle. All of these poisons are deadly and completely fictitious. The main device in the Jason Statham film, Crank, was an imaginary synthetic drug called the Beijing Cocktail that you can only fight off with high levels of adrenaline. Pharmaceutical companies are developing new experimental drugs all the time. Rare medicinal plants and ancient remedies are still being discovered deep in the jungles and rainforests of the planet. So as long as your invented poison isn't too far-fetched, your readers shouldn't have a hard time swallowing it.

Two books I would recommend for crime writers interested in poisons are The Poisoner’s Handbook: Murder and the Birth of Forensic Medicine in Jazz Age New York by Pulitzer Prize-winning writer Deborah Blum, and A is for Arsenic: The Poisons of Agatha Christie by chemist and author Kathryn Harkup. The former is an in-depth look at early 20th Century poisoning cases in New York and the city's first forensic toxicologist. The latter is a complete breakdown of every poisoning Agatha Christie ever penned in her books. It's also filled with lots of useful scientific information. And, if you plan on having a recurring forensic character who sometimes deals with poisonings, Principles of Forensic Toxicology by Barry Levine is a somewhat pricey, but comprehensive textbook used by students and interns as a primer in this field. If you want to get really technical about toxicology in your manuscript, this is your book.

The Butler Did It: Why We Always Blame the Servants