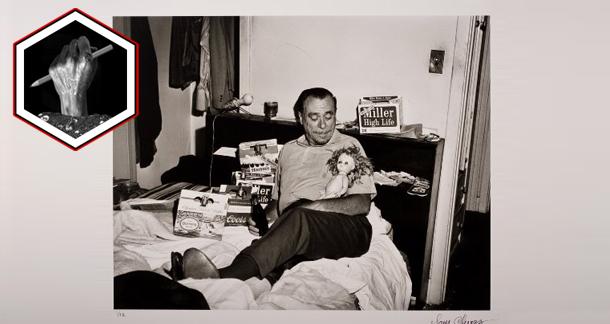 It was a Tuesday night, the night Charles Bukowski checked into my hotel. Obviously I had not been expecting Charles Bukowski—it wasn’t like he had a reservation or anything. These things, sometimes they just happened.

One moment I was staring at my notebook, trying to force my fountain pen across its miserable pages, and then there’s this man clearing his throat and saying, “Hey, kid, why the hell are you looking at that notebook for?”

I jumped at the sound of his voice. It’s beyond startling, thinking you’re alone only to have someone sneak up on you. Especially in this hotel, where I always hear the automatic doors sliding open or the elevator coming down.

Yet this time, I hadn’t heard a thing.

The man in the lobby cleared his throat. It was difficult not to stare at the horrible scars all over his face.

He gestured at my notebook. “What are you planning on doing with that?”

I looked down at the pages, at my so-called story-in-progress. The only thing I’d managed to write on it all night was “FUCK YOU”. I threw the notebook in a drawer and returned my gaze back at the man standing in the lobby.

“Nothing,” I told him. “I’m not planning on doing anything with it.”

The man smirked. “You’re a writer, aren’t you? Christ, everybody’s a fuckin’ writer, I swear. Go into any damn place and spit and you’re bound to get at least three writers wet.”

The man nodded. “Good thinking, kid. A writer's probably the worst thing you can be. Take my word for it.”

I asked him if he was looking for a room, and in return he asked me why the hell else would he be in this shitty dump of a hotel. He had a good point, even if I couldn’t take my eyes off his scars. Jesus, acne must have been hell for this man as a kid.

I took his ID and some cash. He refused to hand over a credit card. I typed up his information, and it took me a few moments to realize the name listed on his ID was “Henry Chinaski”.

“Do you know what makes a man a writer?” Bukowski asked... “It’s simple. You either get it down on paper, or jump off a bridge.”

“I’m Gandhi,” he said. “I’m Elvis. I’m the sonofabitch Mary fucked behind Joseph’s back. Now give me my room key.”

I gave him the key and his ID and he left the lobby. I stood behind the front desk, at a loss of words. I’d grown up reading Bukowski. I even edited an anthology of short fiction and poetry that paid tribute to the man, for Christ’s sake.

Now he was staying in my hotel.

This all would have been a lot easier to digest if the man hadn’t been dead for the last twenty years.

Maybe I’d fallen asleep at work and this had all been a dream. Maybe someone drugged my coffee and I was hallucinating. Or maybe somehow, through some crazy, inexplicable circumstance, Charles Bukowski was alive and checked into my hotel.

I thought about the tribute anthology I’d edited and published. It was called Long Distance Drunks: a Tribute to Charles Bukowski, and had only been out a couple of months. It featured short stories and poems written in the same style, with the same heart, as Bukowski. Stories by Richard Thomas, Craig Wallwork, Tom Pitts, and Joe Clifford littered its pages, among many other great authors. What would they say now, if they knew Bukowski was somewhere in my hotel?

The thought that I was insane kept crossing my mind, but every time I looked at the “CHINASKI, HENRY” flashing across my computer screen, I was filled with another burst of excitement. It couldn’t be him. I was just exhausted. I needed sleep. Charles Bukowski was not staying in my hotel.

The phone rang. It was him.

“Bring up your booze, and we can talk about the awful secrets of the universe.”

“You’re a failed writer,” he said. “Of course you have booze.”

He hung up. I stood there for a moment, debating what to do. It wasn’t a difficult decision. I locked up the cash register, found my stash of Jameson in the trunk of my car, and ran up to his room. The door was already propped open by the deadbolt.

Bukowski was sitting at the desk, motioning for the whiskey. A typewriter rested on the desk in front of him. He took the whiskey from my hands without saying anything and filled up a plastic cup he’d been holding when I entered.

“How long you been writing?” he asked me, although he didn’t really seem that interested.

“I guess I realized I was a writer—”

“Okay. So then I thought I was a writer when I was eight, maybe nine. I don’t remember. It’s been something I’ve always wanted to do.”

“Wanting to do and actually doing are two different things,” he said.

“I do write.” I nodded at his typewriter. “You know, there’s such a thing as laptops now. Makes the whole writing thing much easier.”

“I’ll use this typer until the day I die.”

Bukowski smiled. “What were you writing downstairs?”

I shrugged. “I was trying to work on my new novel, but it’s not going well. My first novel was released a few months ago, another novel is coming out toward the end of the year, and I don’t know what to do now. I try to write, but nothing comes.”

“But I have to try. What kind of shitty advice is that, Buk?”

Bukowski laughed and drank more whiskey. “I don’t mean to not write. I mean, don’t try. Why is that so difficult to understand? Listen. Somebody once asked me, ‘What do you do? How do you write, create?’ You don’t, I told them. You ‘don’t try’. That’s very important: not to try, either for Cadillacs, creation or immortality. You wait, and if nothing happens, you wait some more. It’s like a bug high on the wall. You wait for it to come to you. When it gets close enough, you reach out, slap out and kill it. Or if you like its looks, you make a pet out of it.”

“I don’t know about that, man. Writing seems like it should be the same as any other job. You don’t always feel like doing it, but if you don’t, you’re out on the streets. You can’t wait until you feel like coming in to work, and you can’t wait for the inspiration to hit you.”

Bukowski nodded. “Not writing is not good, but trying to write when you can’t is worse.”

“You don’t know shit, kid. I saw you sitting down in the lobby, struggling with your notebook and pen. There’s nothing to stop a man from writing unless that man stops himself. If a man truly desires to write, then he will. Rejection and ridicule will only strengthen him. And the longer he is held back, the stronger he will become, like a mass of rising water against a dam. There is no losing in writing, it will make your toes laugh as you sleep, it will make you stride like a tiger, it will fire the eye and put you face-to-face with death. You will die a fighter, you will be honored in hell.”

I sat down on the bed. Exhaustion had consumed me. Bukowski continued to drink. I was dreaming. I was hallucinating. I was dead and this was the afterlife.

“I’ve already written two books,” I said. “One’s been published. It’s a crime novel. It’s amazing. It’s awful. It’s the best book in the universe. It’s truly horrendous. I am a two-headed demon sick with a terminal case of who-gives-a-shit. And the second book, it’s coming out later this year. I don’t know what to do after that. I’m drowning.”

Bukowski belched. “When I begin to doubt my ability to work the word, I simply read another writer and know I have nothing to worry about. My contest is only with myself, to do it right, and force, and delight, and gamble.”

I nodded. “There’s some really bad books out there, you’re right. You read some of them and think, surely you aren’t that bad. Then you know that you can make it in this business. I kind of had that epiphany when I read Pulp.”

Bukowski burst out laughing. “My fame is greatly overrated.”

“Some parts of it,” I said. “But still, some of the things you wrote, it made up for the bad. Your poetry, especially. That was the true you. Your heart was in the poem.”

“Your prose was mostly repetitious, but you definitely had some great lines. Memorable bits that’ll stay with me forever. I mean, sure, you’re an awful person. You’re misogynistic as all hell and the majority of your claimed lifestyle was most likely exaggerated to sell more books, but goddammit, man, you had a way to tap into the human condition like nobody else. And I do admire you for that.”

Bukowski no longer seemed so amused. “Admire Celine. Admire Fante. Leave me out of it. I just wanted your alcohol.”

“How are you here?” I asked him. “You died twenty years ago. What the hell is going on?”

Bukowski shrugged. “I never understood why I was alive the first time around.”

“What are you going to do now that you’re back?”

“I’ll probably drink, then I’ll write. You’re acting like there’s something else in this world that needs doing besides that.”

“I feel like we should call someone. How could you possibly be here?”

Bukowski stood up and pointed at the door. “All right, get out. You’re starting to piss me off with your stupid questions.”

Bukowski pulled me off his bed and shoved me toward the door. I tried fighting him back, but his strength was overwhelming. Especially for a dead guy.

“Just wait a minute,” I said. “We need to talk about this some more. We need to figure this out.”

“Do you know what makes a man a writer?” Bukowski asked, as he shoved me into the hallway. “It’s simple. You either get it down on paper, or jump off a bridge.”

Thanks Max/Hank/Charles for all the wisdom.

This was fantastic! Sometimes better than every science for why we cant create is the raw assessment of a dead man. The million dollar question, obliterated into simplicity.Loved it!

Great story, man. In grad school, I wrote a story with Buk as my neighbor and I was told you can't recreate the dead. "It would never get published," an editor told me. Thanks for beating the odds and keeping him alive.

Christine Jackson from Central Texas is reading Toxicity August 1, 2014 - 7:47am

I love the line “I’ll probably drink, then I’ll write. You’re acting like there’s something else in this world that needs doing besides that.” There are times that I believe there is nothing more important than writing, except maybe reading.  Great job Max!