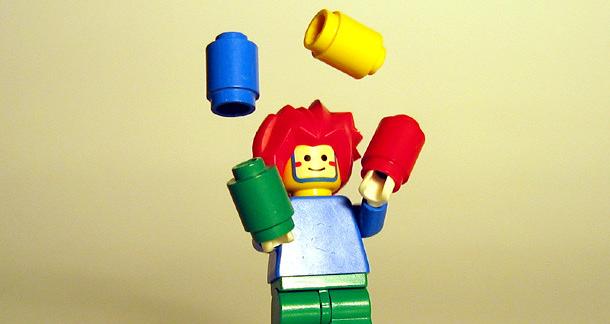 I’ve grown to love one- or two-question interviews of multiple people; it’s like a double-blind conversation among interviewees. It’s also a cool way to round up advice in one place and get a broader view of what people recommend, so you can pick and choose what rings true to you.

In this case, I reached out to some of my favorite authors who are both writers and parents. The questions were simple: what’s your advice for doing both?

Rob Hart: My generation was raised by televisions and we all turned out fine... er, some of us did. I did, I think? But, tablets have learning apps to break up all the weird videos on YouTube Kids! Embrace tablets as a mechanism of distraction.

Cina Pelayo: I'm not organized. I'm messy, and I'm going to give all writer-parents my secret—be messy.

I don't write every day. I don't read every day. I live and do what makes me happy that day, and if that day all I want to do is lay on the sofa and watch TV with my kids and eat too many cookies with them then that's what I'm going to do. When I give myself that power I've let my mind and spirit rest. Then, when I really need to sit down and write something, I know I am happy, my children are happy, and I then have the mental space to sit down and write.

Christopher Golden: It’s fine to imbue your writing with your experiences as a parent or your feelings about what it means to be a parent, but once they’re past the age of nine or so, don’t write your kids or their experiences into your work without their permission. It’s an intrusion into their lives, like actors talking about their kids’ embarrassing personal habits on late night talk shows.

Don’t write your kids or their experiences into your work without their permission. It’s an intrusion into their lives...

Gemma Files: Learn how to write in small increments (ten-minute spurts, half an hour blocks) with furious attention, hopefully while your child is doing something else that you may or may not be interested in at the same time. For example, my son (who's fifteen and has autism) is currently playing "Thank You For The Music" by Abba on his iPad and simultaneously playing the song "Stop and Stare" by OneRepublic on his keyboard, using what sounds like a Moog organ setting. It probably helps that I am also on the spectrum and have always been able to completely immerse myself in something, though as I've grown older I've had to train myself to do/keep track of several things at once, producing a weird sort of ADD/ADHD effect. The joys of neuro-atypicality!

I also really recommend taking lots of notes anytime something strikes you, whether or not it applies to what you're currently doing or not, and not being afraid to crazy-quilt the result, which means transcribing those notes into a file at random and then grooming them into linear sense later on, when you have a longer block of more concentrated time to play with. This is really useful if you're trying to generate several different ideas at once, because you can then sort them into their own files as you go and revisit them once the one you've got a deadline for is finished.

Finally: Outline, outline, outline; build things badly, make them better; don't be afraid to write crap crappily if it gets you to what you need, ie.: the good stuff; take breaks to do other things, but also take breaks by working on other things (sort of like targeted day-dreaming—"I'll let myself think about this other thing for five to twenty minutes, then make myself go back and do the dumb things I gotta do—like touching the puppet head).

Think in terms of incremental sums. Every little bit adds up.

Paul Tremblay: Try as much as you can to keep the writing time to when your kids don't need your active parenting. Kid goes down for a nap? Write then. Kid went to bed early? Write then. Up before your kid? Write then. A corollary (especially if your child can't play independently yet) is to keep writing goals modest and don't beat yourself up if you don't feel very productive. Think in terms of incremental sums. Every little bit adds up. Also, don't be afraid to use your parental anxiety in your stories, even if your stories aren't directly about parenting.

Sarah Read: Write when you can! It likely won't be in long, dreamy stretches where you get to indulge in quiet contemplation. It might be in five-minute spurts, on the back of an envelope held up to your steering wheel in a parking lot. It might be in the precious hour or two between the kids' bedtime and your own, interrupted by household chores or errands. Always keep a small notebook and pen handy, so you can take advantage of those stolen moments, even if it's just to jot down the fleeting ghost of an idea that you know will evaporate as soon as you hear the word "mom," which is about every twelve seconds.

Rob Hart: Writers understand the value of books, so just read to your kids all the time and constantly. Instill that love in them and it'll shape up to good things in the future. And make sure they're smart enough to pick an art that's a little more marketable than writing. Like... any of the other ones.

So the best and simplest advice I can give is do what you can, when you can and do it however best fits your family, not anyone else's.

Christopher Golden: Don’t worry if your kids aren’t impressed—or even interested—in what you do. Like anyone else in real life, they should base their opinion of you on who you are, not what you do. If you entertain them, that’s a bonus.

Writers think in narratives/stories; so do kids. USE THAT.

Gemma Files: Find what your child loves best and enable them to explore that as much as possible, while simultaneously using that thing as a reward to trick them into doing things they don't want to do, but also as a lingua franca/system of acts of love with which to communicate with them. I get that mechanically, this sounds like it's far more about my particular situation, but I'm fairly certain that you can use it with neuro-typical kids as well, because EVERYBODY has something they love so much they'll work for it.

For my son, it's music in general, with whatever he likes right now and the huge back-up library of stuff he's already learned about previously overlaid on top of each other. For your kid, I think you'll find that while their interests may seem to change more quickly than my kid's appear to, they can still be graphed in a way that gives you a lot to fall back on. So make yourself interested in what they like, because I'll bet you five bucks their interests probably form a VennDiagram intersection with your own at some point, and holy Hannah, that can be useful. (We used to work with an otherwise lovely speech language therapist who had no knowledge whatsoever of current children's popular culture, including Disney. It was...really interesting watching that person try to track my son's almost entirely echolalic language cues.)

Or how about this? Writers think in narratives/stories; so do kids. USE THAT.

Muses are immortal—they can wait, but your kids can't.

Paul Tremblay: Take joy in reading to your kids. It's fun (you get to try out silly voices without judgement, or without harsh judgement) and I learned a lot as a writer reading out loud to my kids when they were in the 3-7 range, particularly when reading more challenging books or well-written kids books/classics. Showing your kid that you're passionate about reading (or any artistic endeavor really) is important. Show them it's okay to like things.

Sarah Read: Time spent with your kids is more important than time spent writing. Their childhood goes fast, and it's precious. My 5-year-old might need me constantly right now, but my 12-year-old disappears entirely for hours at a time. Muses are immortal—they can wait, but your kids can't. Try not to get frustrated when they interrupt you. Appreciate that they're seeking that connection and reaching out. It's super important to them that you look away from your work and talk about Pokemon for a few minutes. It's good for them to see your hard work, creativity, and perseverance in action, but they shouldn't feel second fiddle to it. On the flip side, try and escape altogether for a weekend once or twice a year, to focus entirely on your own work.

I’m new to the mom + writing game, so these answers were incredibly helpful to me. I hope you found something useful as well!

Caretaker/writers: How do you juggle both roles? What tricks and lessons have you learned along the way?

I am pleased to have such an amazing work, HyfyTV Apk Download

Parenting is not easy at all, but you can make it easier if you teach modern kids to carry their devices. They are growing in a modern time, sitting almost 24/7 with the devices in hand, if 20 years ago our parents said `don`t go with strangers anywhere` now in 2k20 kids have to ignor strangers in internet, here s a guide https://programminginsider.com/3-ways-to-ensure-that-your-kids-arent-talking-to-strangers-online/ for every parent to take control for your kid internet activity!

If you are looking for free learn maths at ghanateachers.org resources, you'll find a wealth of them on the Internet. Not only do these sites have an impressive library of videos and interactive exercises, but they also offer lots of helpful information for parents. In addition to these free resources, you can also visit the following sites for a strong foundation in kids' math. Each of these sites offers a wealth of resources for parents and teachers. Read on to learn more.