Why You Should Name Your Artistic Nemesis 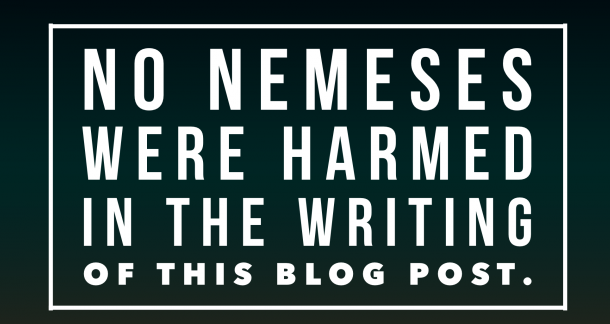 I generally try to be positive online, if for no other reason than like attracts like, and I don’t want to hang out in constant moan-and-groan land. I talk about the good stuff more than the bad. I praise work I love and ignore what I don’t. I compliment as much as I can and more or less keep my criticism to myself. I guess I kind of buy into the old If you don’t have something nice to say mentality. Because of that, you won’t *often* catch me calling people out—unless it’s myself.

So it might surprise you to find out that I, quite gleefully, have an artistic nemesis or two. What’s more, I highly recommend it for all writers.

Why do I find value in this particular negative practice? I’ll tell you the story.

I picked up a horror novel that came (very) highly recommended by (very) prestigious sources. This was supposed to be the scariest book in a long time. The best, most well-written, a page turner. What’s more, the concept was right up my alley. In fact, it was a potential comp title for one of my own manuscripts, so I was hoping to get a twofer.

It started out good. I was buying in, the character was interesting, the mood was excellent. The prose was very good—distinct and stylistic while still being clean. A few authorial tics here and there, but overall drew me right in.

Drew me right in and then went for the throat. Holy shit, it was scary. Really scary! (And no, I won’t tell you what this book is or who the author is: see opening paragraph + blog image.) I was deeply unsettled, getting more and more sucked into a nest of strangeness and discomfort. The tension was ratcheting. I was nearly breathless with excitement. It’s so hard to find a scary book that’s good and pushes your particular buttons. Those authorial tics were becoming a little more annoying, but hey. You can’t have everything.

Then we headed into the ending. Climax peaked… and… nose-dived straight into WTF town. And I’m not talking good WTF where you’re shocked and totally invested and you’ll never be the same. I’m talking bad WTF where you can’t believe someone actually thought this twist was a good idea. How in the hell anyone could’ve taken something that was going so well and just… dropped it down the poop chute.

I wish I could say I threw the book against the wall. I’ve always wanted to throw a book against a wall and this was my chance, but, well, it was an audiobook and I like my phone. A lot of people probably would’ve just stopped listening, but I kept on. I was rolling my eyes and shouting at the narrator and shaking my head the whole time, but I finished the book. I was half hoping there was a psyche! at the end, but no dice.

After the fact, I found so many problems with the whole book. There’s probably a term for that psychological phenomenon: retrospective criticism or something. Once I knew it wasn’t good overall, all the early parts I’d thought were good suddenly seemed glaringly flawed. Those tics were unbearable. The character never went anywhere. The concepts were flimsy. On and on, the mistakes and weaknesses in the work stood out like they’d been highlighted. The book was maddening.

I didn’t know it at the time, but I’d accidentally found my artistic nemesis.

Your artistic nemesis is not the person who’s excelling at exactly what you want to excel at; that’s your role model. You admire them, learn from them, be grateful for them. They’re pointing you to your readers, teaching you how to achieve what you dream of, proving to you that it can be done.

Your artistic nemesis is not the person who pisses you off at writer’s conferences and book events, either. That’s, like, your social nemesis or something. You proooooobably shouldn’t have one of those. If you’re grown. But whatevs.

A well-chosen nemesis should be very skilled. There are things you can learn from poor writers, but there are many more things you can learn from great ones. (And, frankly, it’s a much more pleasant way to spend your time.) Their high skill level is important also because it makes the “mistakes” (subjective) stand out brightly to you, teaching you what exactly it is you don’t like about their work.

The perfect artistic nemesis (and you can certainly have more than one; I do) should be doing very well in the field you want to do well in, but in a way that kind of ruffles your feathers because, on a deep gut level, you feel you can do it better. That’s good. It’s not ego as long as you do the work and learn from it. Don’t just think/say you can do better; study their work, find out where they went ‘wrong,’ and actually figure out how to do better. Then do it.

Now, a final note, I’ve been using the word nemesis pretty playfully here, and I hope that’s apparent, because I don’t at all advocate approaching this person as an actual foe of any kind. That’s kid stuff. There’s no reason to be unprofessional toward the person, and in my opinion, no reason to publicly name them. Critiquing a book is one thing—and that’s a whole separate discussion—but calling someone out is another. If your nemesis is in your field/genre, you probably don’t want to get into any drama. After all, if they’re doing almost what you want to be doing, they probably run in the circles you would like to run in. No one likes a smack-talker.

And, really, at the end of the day, I respect all of my “nemeses.” They’re talented, hard-working, and share many of my tastes and aesthetics. Otherwise I wouldn’t be using them to learn from, right? So no, I won’t be naming names. A well-chosen artistic nemesis is someone you could meet and say, “[Insert title] was a compelling/great/interesting book. I’ve learned a lot from you,” and actually mean it. That's nothing to sniff at.

So how about you, writers? Have you consciously named your artistic nemeses? (To yourself—I take no responsibility for anyone sharing theirs here.) Have you done the work to learn from their ‘mistakes’?