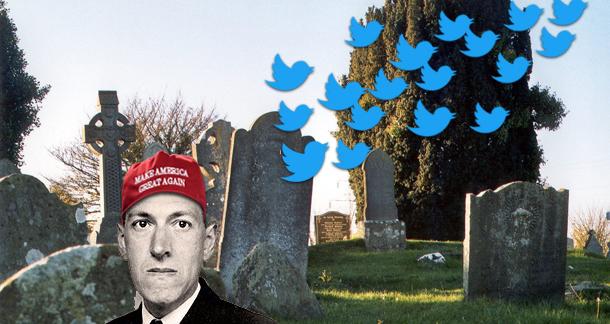 In writing circles, it’s often speculated how much more productive we’d all be if we disconnected from the Internet. Would Charles Dickens have created such classic works if FarmVille existed in his time? Would Bukowski have bothered to sit in front of a typewriter if he could just harass women on Twitter? It’s hard to know for sure, but I’m gonna give it my best guess. If famous dead authors were alive today, what would their social media presence look like? Well, maybe a little something like... 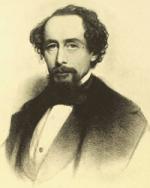 He’s responsible for many of the books teachers force bored teenagers to read in high school. Oliver Twist, Great Expectations, A Tale of Two Cities, you name it and there’s bound to be a kid out there who has lied about reading it. But would any of these books exist today if Charles Dickens had a Twitter account? What the hell would he have been doing with all of his time if these other activities were made available?

He probably would have kept writing, but if I had to guess, he would have posted most of his books on Patreon in the form of monthly serials and never stopped talking about it. Between breaks from Patreon promotions, he would have also tweeted non-stop abuse about his ex-wife, Catherine Hogarth. After birthing ten of his children (children he would grow to detest), Dickens decided his wife had gained too much weight and no longer felt she was his intellectual equal, so he left her and took nine out of ten kids with him. He also started a secret affair with a woman much younger than himself. To make matters worse, he published multiple open letters in newspapers slandering Catherine, calling her a terrible mother, claiming nobody loved her, not even their children. These were words he published in newspapers. Can you imagine what vile trash he would have posted on Twitter if given the chance?

Bukowski is the kind of writer most people mistake as a genius during their teenage years. People who wise up upon reaching adulthood and realize he was really more of an asshole than anything else. His general fandom comes from those who romanticize the idea of being an absolute piece of shit. I fully admit to loving him to death as a kid. Shit, I even edited a Charles Bukowski tribute anthology several years ago. I’m not proud of once idolizing the man, and I’ll be the first to acknowledge he wasn’t a bad writer. Post Office and Ham on Rye remain two novels I’ll always cherish, although I refuse to reread them. And some of his poems, they truly are something special. But...on the other hand, the dude was an alcoholic misogynist, and the majority of his work degraded women in disgusting and foul ways. Watch this video of Bukowski kicking the shit out of a woman during an interview and try convincing me to separate the art from the artist. Sometimes, it just can’t be done.

If Bukowski were given access to social media, he probably would have just posted snippets from his poetry a couple times a day, lines that seemed powerful at first glance, until you really thought about what you were reading and realized it was all just a bunch of bullshit. Also, since he prided laziness, he would have definitely been one of those people who sync their Facebook statuses directly to their Twitter accounts, and that kind of behavior is simply inexcusable. 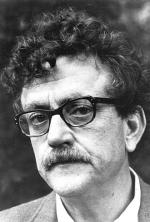 Vonnegut was not someone who enjoyed interacting with fans. He preferred to keep to himself whenever possible. The idea of him participating on Twitter is absurd, and I have a hard time imagining it. At the most, maybe he would have allowed one of his publishers to run an account, but that’s about it. This unofficial Vonnegut account is probably pretty close to what they would have ended up posting. 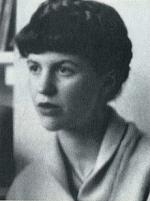 Mention Plath’s name and the first thing that might pop into your head is the word suicide. It’s unfortunate that this is what she seems to be most well known for, since her poetry is incomparable to anyone else. It’s truly something special. But yes. Sylvia Plath lived a very depressed life that resulted in a very depressing outcome. If she’d had access to social media, maybe she would have had better luck finding the help she desperately needed. And maybe she would have just shared sad memes about loneliness all day. 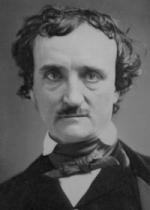 I find it hard to believe Poe would have much of a life on social media. Maybe he’d just get drunk a lot and type abusive YouTube comments in all caps. He loved a good feud with other writers, so maybe there’d be some fun snark between him and others on Twitter. However, it’s important to note that Poe may have actually been a pedophile, and that kind of shit is thankfully not tolerated these days. I mean, come on. Dude married his 13-year-old cousin when he was 27. It’s pretty hard to justify that. If Poe were using social media today, every status would feature people appropriately replying with, “Yeah, but don’t you fuck literal children, though?” 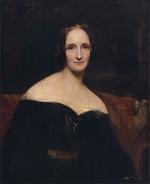 In 1818, 18-year-old Mary Shelley anonymously released arguably the very first science fiction novel in history. Few books have proven more inspirational in genre fiction than Frankenstein; or, The Modern Prometheus. The daughter of radical parents, Mary embraced literature full-force, absorbing all available knowledge. She was smart as hell. Back in the day, her intelligence frequently impressed people, especially considering her lack of formal education. On social media, her presence would probably resemble something similar to Neil deGrasse Tyson’s Twitter account, only with way more charm. Basically, someone who’d post cool science facts but in a way that wouldn’t make everybody want to punch them in the face. 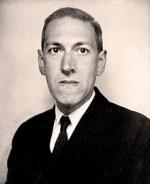 Let’s be honest, Lovecraft would have eaten up the Internet. Between Twitter, 4chan, and YouTube comment sections, he’d have found a bottomless pit to spew terrible, racist beliefs. How long would it have taken before someone promoted him as a moderator for the Stormfront forums, or an official columnist for Breitbart? Imagine Lovecraft’s views on #blacklivesmatter. You don’t even have to. Just go read his work and you’ll get a pretty good idea. Honestly, it’s not even that difficult to imagine Lovecraft rocking a red MAGA hat. Actually, I take it back. Don’t go read his work. Read literally anything else, like The Ballad of Black Tom or Kanye West - Reanimator.

What do you think, readers? Who else would you have liked to see included on this list? Drop your own speculations below in the comments, but do not, under any circumstances, @ me about Lovecraft.