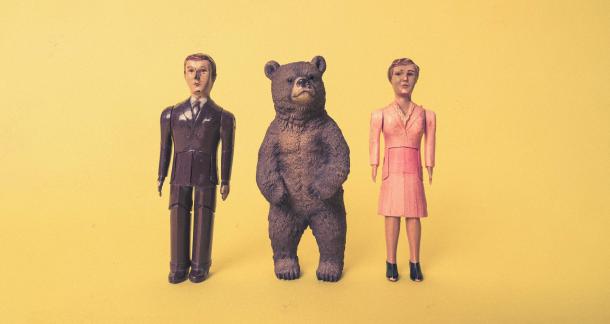 When it comes to writing, there are no real rules for how to do it. Some articles and craft books mistakenly try convincing readers “this is the only way to become a good writer, and if you don’t follow our advice then you’ll never succeed!” Obviously that’s bullshit. Every writer is different. What works for one person won’t necessarily work for someone else.

For example, one of the best movies I’ve seen in the last decade is a little indie film called The Greasy Strangler. In it, an old man frequently strips, covers himself in grease, and strangles people. His dick is grotesque and every time it dangles on the screen, I’m hypnotized. My girlfriend, on the other hand, despises The Greasy Strangler. She also despises me whenever we’re in the grocery store and I start swinging weird-looking sausages around my pelvic area while singing, “Hootie tootie disco cutie! Hootie tootie disco cutie!”

My point is this: human beings are unique. Not all of us like the same food, or the same entertainment, and we certainly don’t create art the same way. So what can articles on craft teach us? Methods. They can teach us potential routes to explore. Every story is waiting to be told. Sometimes the biggest struggle is figuring out how to tell it.

One of the best movies I’ve seen in the last decade is a little indie film called "The Greasy Strangler".

When you’re first starting out—and, hell, let’s be real here, even after you’ve gained years of experience—the act of developing an idea worthy of writing about can feel like a near-impossible task. The best writing comes from the heart. The more personal you get, the more honest the words will read. That’s why I recommend, when digging for something good, to think back: Can you remember an instance when you felt true fear? Something that truly shook you from comfort? Take advantage of this unfortunate memory and recycle it onto the page.

Grab a pen or pencil and a blank sheet of notebook paper and write out your entire recollection of this terrifying event, from beginning to end, in a first-person stream of consciousness. Anything that comes to mind about this particular incident, write it down. Don’t worry about any of it sounding good. No one except you will ever read this. Obviously you can type it rather than using longhand; however, I do think you’ll find better results with pencil and paper in this instance.

After you finish, look it over a couple times and meditate on what you’ve just written. Think of what’s in front of you as a pile of bones. It is your job to next take these bones and construct a proper skeleton out of them. This stream of consciousness exercise isn’t an outline of a story, it’s the outline of an outline.

Consider what you’ve written: ideally, you should be the protagonist, right? What is happening to you? What is the conflict?

Take out another blank sheet of paper. In the dead center, write the conflict in five words or less and circle it.

Now, how is the conflict eventually resolved? Revisit your previous notes if necessary. Write the resolution in five words or less below the conflict. Circle it.

And what led to the conflict in the first place? Write it at the top of the page, five words or less. Circle it.

You now have a three-act structure.

The following example is purely hypothetical for legal reasons.

Let’s say I sold a novel to a very popular horror magazine, and to celebrate its release, they hosted a book launch about five hours from my house. So, I pack my bags and make a road trip of it. I get there a little early and decide to stop by the publisher’s office and check everything out. However, just as I’m turning into the parking lot, a car hypothetically bashes into me from behind, successfully totaling my vehicle and giving me a concussion. Already I have my first and second act.

Act one: The road trip.

A good conflict derails your protagonist from their goals. In this purely hypothetical example, my goal was to meet the publisher of my new novel, hang out, then go to our book launch. Did that happen? Well, not exactly. Something got in my way. I was hit (hypothetically). How did we resolve the issue? We called an ambulance. We called a tow truck. We gave statements to the police. Maybe you’d expect me to cancel the night’s book launch and get myself checked out at the hospital, considering the soft-ball-sized lump on my head. That would be a smart thing to assume. But, hypothetically, maybe I ignored all of that and still went to my book launch and gave a half-insane reading to a bookstore jampacked with people, then afterward roamed the city groaning and holding my head and eventually fell asleep in my hotel. And maybe the next day I surrendered and went to the hospital and discovered, weirdly enough, that I did indeed have a concussion. The resolution? I don’t know. Ignorance Stubbornness? Offering my car to a junkyard deity? Uh, hypothetically, of course.

So, following my own advice, here is how I’d map out the above incident: 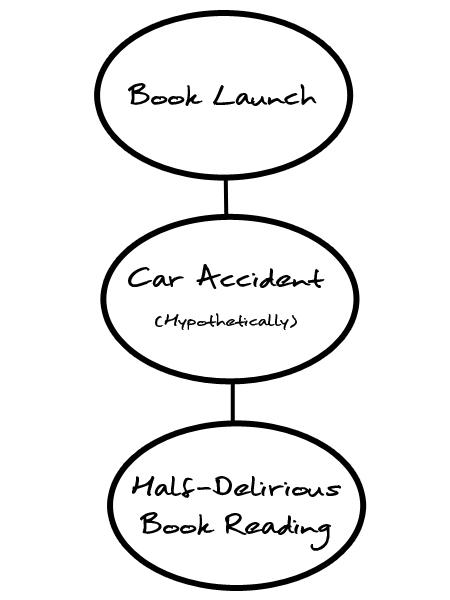 But now consider something else. Conflict is not always so clear-cut. For every story derailment, there must be consequences. Consequences, plural. Just like real life, stories are seldom restricted to a single path. For every action, multiple reactions will unfold. As you map out a story and contemplate every possible angle, you’ll start to notice a sort of spider web effect.

Exploring the car accident example further, imagine everything that could have potentially occurred as a direct result of this hypothetical crash. You have minor consequences, such as book launch tardiness, clothes drenched in Diet Coke (don’t ask), but you also have more significant consequences, such as head trauma, possible lifelong anxiety issues, and having to deal with somehow acquiring a new goddamn vehicle. 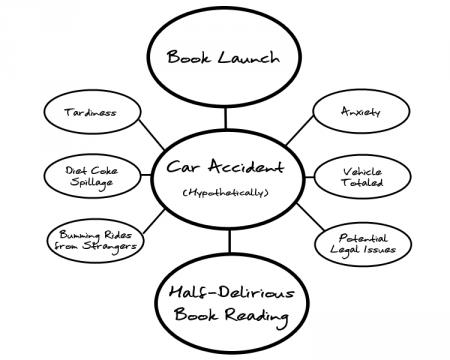 Hopefully by now you’re beginning to understand how to plot a story. It’s only complex if you make it complex. Of course, by continuing to branch out these spider webs, you might find yourself facing too many details. As the story evolves, it will be up to you to determine what’s interesting and what can be omitted. Keeping things simple and gradually building off consequences can lead to some interesting territory. But let’s make things...a little bit more interesting.

Taking a look at the three acts you circled on your paper, what do you think would happen if you changed one of them to something that you didn’t actually experience? Something...untrue? By keeping two of the acts true to life, you maintain the genuineness of your story. But now you’re free to divert it into the unknown.

Again, returning to the car accident example. What if I tweaked the first act? What if my goal wasn’t just to attend a book launch? What if, hypothetically, I had set out that day to get into an accident? Maybe I had been cruising the streets, searching for the right car, and pulled some kind of maneuver that would guarantee a wreck. Maybe I read J.G. Ballard’s Crash too many times and now vehicular accidents are my one true fetish. Who knows? The possibilities for why someone would possibly want to intentionally wreck their car are endless and fascinating. You’ll find, the more you tweak and screw around with reality, the weirder and more interesting the story will become. By the time you have a finished product, maybe all three acts will be lies, and that’s totally cool, but at the very least I recommend turning one truth upside down.

Think of reality as the base of fiction. It’s your job to build something new out of it.

8 Ways to Outline a Novel

Joshua Chaplinsky from New York is reading a lot more during the quarantine June 28, 2019 - 1:41pm

Yes! You won't regret it!