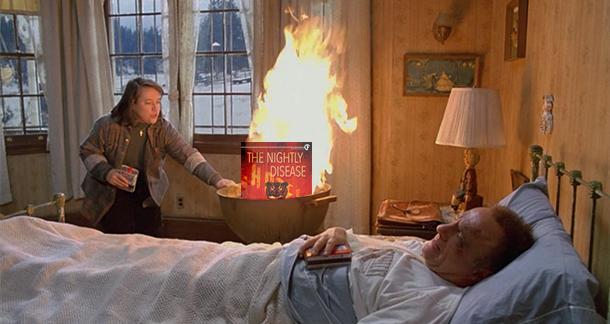 In December 2016 my fifth—and, let’s face it, my best—novel was published.

Not just my book, but every title DarkFuse published prior to January 1, 2017. The publisher decided to change things up and focus only on limited edition hardcovers and their online magazine. Authors were given the option of signing a new (not very good) contract, allowing the press to keep their titles in print, or the authors could simply take their books elsewhere. I chose the latter option, like the majority of the others, I’m sure.

I did not anticipate this turn of events, but such curveballs seem to be frequent in the publishing industry. I’ve only been involved with this scene for six years now and so far I’ve witnessed enough shit go down that even Future President of the United States, Dwayne “The Rock” Johnson would be traumatized for life.

I am not here to trash-talk my ex-publisher, but to explain the current status of my novel. Will it remain loitering in the void? I doubt it. But maybe it should.

The novel in question is called The Nightly Disease. It’s about a hotel night clerk dealing with sleep deprivation and rude guests. I wrote it while working the night shift of a hotel. A lot of it is autobiographical, a lot of it is nonsense. If you’ve read other columns of mine on this website, then you’ve probably heard me talk enough about it.

Depression hit me hard during the week leading up to my book’s scheduled demise. I had to email several websites who had agreed to review it and let them know not to bother wasting their time. If a new audience couldn’t purchase the book, then hustling for reviews became meaningless.

Now that the book has been removed from distribution, the way I see it, I’m left with three options going forward.

Going the self-publishing route doesn’t seem too far-fetched, considering I’ve operated my own small press, Perpetual Motion Machine, for the last five years. I’ve yet to publish my own writing, not because I view self-publishing negatively but more because I prefer to keep my own writing and my publishing business separate. I feel like if I start publishing my own work through PMMP, then I risk criticism of playing “favorites” over the press’s catalog. It’s less complicated to just let another publishing company handle my writing.

The problem with approaching another press, of course, is that it’s going to be difficult to convince someone else to reprint a book that came out six months ago. Don’t get me wrong: when I announced the death of the hotel novel, I received numerous messages from other presses offering to take it off my hands. However, the majority of those presses were terrible.

Would a big publisher be interested in a novel that’s lived such a short life? Doubtful. I probably won’t ever know because I am far too lazy to even give it a try. In its six months, The Nightly Disease collected 42 reviews on Amazon and 43 reviews/70 ratings on Goodreads. That isn’t really a big deal, certainly nothing to brag about, but for something released through a small press, I’m not too ashamed of those numbers. But how many copies did it sell in those six months? I honestly can’t say, as DarkFuse hasn’t sent me a royalty statement yet. Surely they’ll stick to their word and update me next month about where we stand, but until then I’m left in the dark.

Which brings me to option #3: forgetting I ever wrote the damn thing and focusing on new books.

Allow me to state the obvious by telling you the process of writing a book is quite the lengthy endeavor. Even when you think you are finished, its completion will continue to stretch on and on until you’ve successfully pulled every strand of hair from your scalp, and even then it probably won’t quite be done. All writers must face the cold reality that no books are ever actually finished—they’re abandoned. Either you give up and send it out into the wild or you never stop fidgeting with it.

Solace is only gained once the book has been published, because the time to edit has passed. It’s too late to make any additional changes. Once it’s out, it’s out, and if you decide you want to change a couple things, well tough shit, it’s too late. It’s difficult to describe the relief that hit me once The Nightly Disease was released. I had been working on this book for a couple years, writing a scene here and there between interactions with guests at my job. After a while, like with any book, you start getting sick of it. You just want to be finished so you can move on to the next thing. After the hotel book came out, I wrote another novel (which, at the time of this article, hasn’t been accepted anywhere yet) and started on a new one almost immediately. I haven’t thought about writing the hotel book in a long time. I thought I was done with it. I thought I could wipe it from my memory. This is how I imagine most writers feel once they release a new title. They delete it from their brains to clear room for the next project consuming their every waking thought.

It makes sense, but it’s also foolish, because what happens when that book unexpectedly goes out of print and you’re forced to revisit it all over again?

Maybe it’s selfish to assume a novel will live forever. Maybe a novel should only last as long as its initial interest. Maybe six months is the perfect lifespan for a book. Any longer, and it’s just outstaying its welcome. There are so many books on this planet being published every single day, and it’s rude to take up any further space than we rightfully deserve. I think about my novel and I wonder if there would be any point in bringing it back to print. It had a good run. The readers who would find it entertaining have probably purchased it by now and if it had stayed in print it would have just slowly faded into oblivion. Or maybe it was just about to hit a point where hundreds of new readers discovered it. There’s no way to tell with these things, especially now that it’s gone.

But will it stay gone?

No, I don’t think so. A part of me wonders if it would be for the best, yes, but another part of me—a much more selfish part—can’t allow it to happen. I spent a lot of time on it, and I do think it’s the best thing I’ve written so far. It’s definitely been the most well-received, at least. So yeah. The book will return. I’m not sure yet if it’ll be self-published or released through another press, but I’ll figure it out eventually. Right now, I’m going to work on adding some additional content, maybe tightening a few scenes. Give previous readers a new reason to buy it again.

But am I going to stress out too much about it?

There are other books to write.

Other stories to tell.