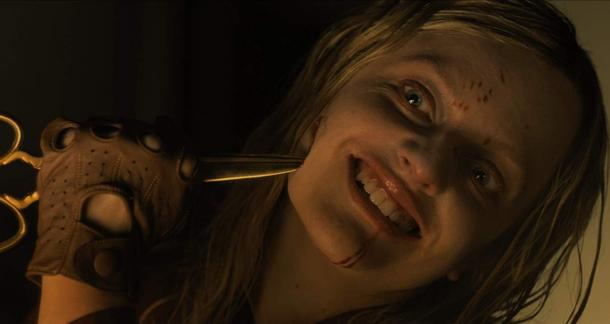 This won’t be the first article written about the intersection of horror and comedy. But it will probably be the last, if only because articles that don't contain clickbait headlines and recycled news gossip from twenty other tabloid websites are quickly becoming extinct, replaced by ten-second video clips of people getting kicked in the balls. Until that happens, however, I am going to use up what remaining time this text-based website has by talking about what I call “the horror punchline.”

Every year, at an Austin-based horror convention called KillerCon, guests tend to line up solely for the purpose of letting author Wrath James White punch them in the arm. It is a proud, stupid tradition, and I don’t know how anybody enjoys it besides Wrath James White. An old author bio of his starts off like this: “WRATH JAMES WHITE is a former World Class Heavyweight Kickboxer, a professional Kickboxing and Mixed Martial Arts trainer, distance runner, performance artist, and former street brawler.” So, yeah, it’s no surprise that people tend to leave the convention bruised and full of regret.

Despite all that, nobody has ever called the event a horror punchline, although the name is pretty much perfect, when you think about it.

Instead, a horror punchline is kind of exactly what it sounds like. It’s the same thing as a comedy punchline: the third and final part of your standard joke structure. Your typical joke can be constructed out of three sections: the framing, the telling, and the punchline. Within each of these sections, you can still fit in other, smaller jokes, but it’s all leading to the punchline, right? The Big Joke.

The horror genre can be approached in the same way, I think, only you need to replace the word “jokes” with “scares.” Every horror book, every short story, every movie, they all contain their share of small scares and big scares, right? And the big scares usually aren’t effective without first experiencing the small scares. They all work together, crafted into one ongoing structure, subtly leading its audience to the punchline. The small scares usually exist to establish the story’s atmosphere. They’re trying to prepare you for the punchline. Even the coolest Big Scare in the world isn’t going to work if you aren’t already in the right headspace. Before a story can hit you with that ultimate punchline, it has to lure you into its world. Only once it gains your trust can it then go on to trick or surprise you. 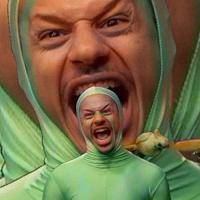 Comedians probably operate the same way during extended, three-part jokes. They need to first establish the world their joke takes place in before they can actually sell you on the punchline. Otherwise, just like horror, you risk the possibility of it coming off too random. You have to give the audience a reason to care. You have to get them emotionally invested in the material, whether it’s horror, comedy, or any genre.

Even jokes that appear random, like the majority of Eric Andre’s work, still establish the normalness of the skit’s world before he jumps out of a wedding cake jerking off a goat. In the hypothetical skit I just mentioned (that’s probably a real skit), you would first see regular wedding guests socializing in the reception hall, laughing, dancing, whatever, while in the background a seemingly innocent wedding cake sits, waiting, letting everybody—including the audience—lower their guard. And then bam! Eric Andre’s jumping out of that cake jerking off a goat. Without those opening moments of sanity, the lunacy that follows wouldn’t hit as hard as it does.

When you think about horror with a punchline mindset, you also improve the way you approach basic story structure. You start considering the importance of foreshadowing earlier in the drafting process, rather than falling into the trap of jampacking the manuscript with obvious “second draft” clues that’ll undoubtedly cause readers’ eyes to roll so far back into their heads that loved ones will briefly mistake them for cartoon corpses.

It’s often said that horror and comedy blend well together, and that’s because they both thrive off punchlines. When you inject these two genres into the same narrative, hoping to perfect the horror-comedy crossover that so many other artists have failed to, it’s crucial to keep this structure in mind.

It’s also important to recognize that when people discuss horror-comedies, there are two possible subgenres they might actually be talking about.

There is the basic comedy maneuvered around familiar horror elements. Usually it’s not intended to engage its audience in real negative emotions. It’s more of a, “Hey, remember these monsters or tropes from previous horror movies? Well now we’ve made them whacky!” Sometimes those are entertaining, sure, but most of the time they come off like a stale fart that’s outstayed its welcome. There’s another sub-subgenre of this kind of horror-comedy that’s pure parody, consisting entirely of awkward Family Guy-esque references—think of the Scary Movie franchise—and it’s truly a travesty everybody involved in those films has not been left to rot in a ditch somewhere. 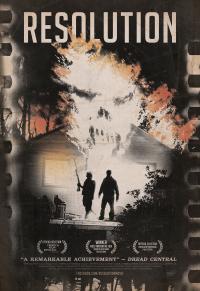 The other style of horror-comedy people talk about tends to favor the horror over the comedy. We embrace the typical emotions associated with horror while also somehow pulling off jokes sprinkled here and there, usually through dialogue performed by well-written characters. This is my personal favorite form of horror-comedy. Books and films where the horror itself is genuine, but the characters involved react like real people. I don’t know about you, but even during some of the most terrifying moments of my life I still managed to sneak in a joke or two. It is humanity’s natural instinct to laugh in the face of pure darkness, even if we would desperately prefer to scream instead. If you want a great example of this type of horror-comedy done well, look no further than the films of Justin Benson and Aaron Moorhead. Resolution, Spring, The Endless, and Synchronic all tackle horrifying concepts with complete sincerity, but they’re also funny as fuck, and that’s due entirely to how the characters react to everything going on—how they cope.

Another thing to consider when blending horror and comedy: the punchlines work best when you’ve managed to first knock the audience off balance. You have to catch them with their guard down, and to do that you have to become a little bit of a trickster. Sentence structure and story rhythm are two components of the craft every writer must carefully consider if they hope to pull this off successfully.

So how do you make your audience uncomfortable? You make them experience conflicting emotions. The best scares hit when they are least expected, and who the hell is expecting a big scare while laughing? Lead with something humorous, then twist it into something much darker. This also makes sense if you flip it around. Nobody’s expecting a big laugh while in the middle of being terrified. That’s why the “Fuck tha Police” scene in Jordan Peele’s Us worked so well. Here we are, witnessing several side-characters get absolutely fucking slaughtered, and it’s punctuated by one of the victims accidentally triggering N.W.A. on her knock-off Alexa.

If you can pull something like that off—holy shit, I think you have yourself a winner.

Get ​Resolution at Amazon

Get Us at Amazon

I love the topic of horror, it is found not only in literature, but even in games. For example, I recently saw an ad for a real money casino, which also has horror slots. I wonder why humanity is so attracted to this topic?

I have been playing classic slot machines like roulette for a long time, but recently I wanted something new. Friends advised me to try hyper strike slot demo https://jackmobilecasinos.com/mobile-slot/hyper-strike/ and I really liked it. This is a very cool modern game for those who like bright colorful games.

This is really so horror scenario! I have been watching different kinds of horror movies since my student life. But now I am a content manager at this flitymania site and help the people. I must say that this is so amazing performance in the horror movie!

If you want to play online roulette or poker, then go to vulkanvegas   casino and use your strategies to win. I would advise you to play slots as there are good bonuses and I recently won $ 200. This is my favorite site, so I recommend it to you too.

See the news information about the freegames online for example. Book of Ra is presently the most mainstream online club, roulette and blackjack are no longer as pertinent as book of ra free play. So stay aware of the time. what's more, recollect that the world moves and grows so rapidly that assuming you accomplish something, you stop, and in the event that you don't do anything, all that will stay behind you. So we should carry on with this life brilliantly and delightfully!

The punchline lets the people know about the intersection between horror and comedy movie. I love enjoying different types of movies including horror and comedy. This Los memes mas graciosos del mundo has been providing some great ideas on how to get touched in entertainment with the girls and women around the world. Thanks for sharing this post with us.

I also consider Las Vegas to be a great evil. All human sins are intertwined in this city. But can it still be good to have such a place? After all, this city serves as a place of attraction for the people you wrote about in the article. Maybe it's better for all of them to be in one place? After all, if there were no Las Vegas, they would be distributed throughout the country. A very interesting article, I will ask my subscribers for their opinions on the blog videochat gratis. By the way, I live far from Las Vegas and there is no gambling business and I am happy to live here.