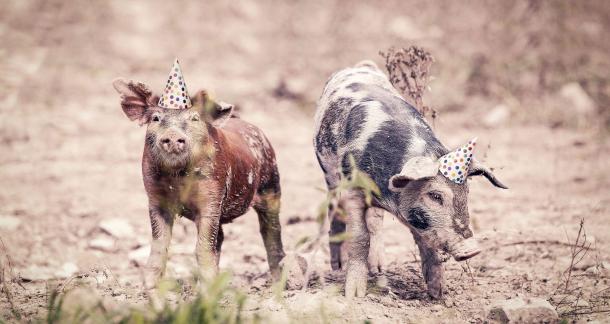 2015 was a big year. Very big. In fact, by the time we reach the end of the month, it will have been 365 days long. 261 weekdays, and 104 weekend days. 52 weeks, and one day. 8,760 hours. 525,600 minutes. Dude. That's freakin' 31,536,000 seconds. Incredible! So big! So crazy! 2015, you little rascal. You were nuts! So many things happened. Most of them were horrible things, but not all. A lot of things happened in the lit world, too. For instance, my new kidnapping guide was released back in July, and five people read it. That's ten eyeballs, unless one of those readers had some sort of eye injury. Perhaps one of them had more than two eyeballs. Perhaps a mutant read my book. I could be popular in the sewers. I could be a household name down there. A drain-name? No. That's terrible. I regret typing that sentence. So why not just delete it before anyone reads it, you ask? Well, aren't you smart. Here's why I don't delete it: I don't live in the past. Which is why I'm doing an article about the past. Ahem. So. Here are some things that happened:

2015 started out with a bang by releasing a movie nobody watched: The Boy Next Door. I actually have no idea what this movie is about. I assume it's about someone attempting to borrow sugar from a neighbor, but it's probably something far worse. In any case, back in January a clip from the film went viral. I'm gonna go out on a limb and say you've seen the clip, even if you don't remember. In one of the most romantic gestures of cinematic history, a man gifts Jennifer Lopez a first edition copy of Homer's The Iliad. Oh, how we pointed at our screens and laughed. For a brief moment, our lives no longer seemed so pointless. Thank you, Jennifer Lopez. Thank you, other people probably involved with the movie.

Oh! And side note, when looking up the Wikipedia page for The Boy Next Door to confirm the actress's name, I happened to catch a glance at the last paragraph of the plot's synopsis. Now, go rewatch that Iliad scene, then read the following paragraph, which is how the very same movie ends. Spoilers, obviously.

Noah binds and gags Vicky with duct tape and uses an audio recording of her voice to lure Claire to her house. When Claire arrives, she discovers Vicky's dead body, with her throat having been slashed by Noah. A horrified Claire contacts the police, but runs into Noah again. He reveals to her that his mother killed herself after his father cheated on her, so he rigged the brakes of his father's minivan, killing him and his mistress. Noah takes Claire to a barn house where he has kidnapped Garrett and Kevin, threatening to kill them unless Claire stays with him. A violent altercation occurs as Claire attempts to free them. Noah pours kerosene around the barn, causing it to ignite in flames. Garrett, having freed himself, attempts to choke Noah with a rope, prompting Noah to shoot him in the chest. Claire stabs Noah's eye with Kevin's EpiPen. When he later holds Kevin at gunpoint, she pulls a switch that drops an engine on Noah, killing him.

Let me be the first to say: hahaha, what the hell.

Speaking of laughable books that probably shouldn't exist: Harper Lee surprised us all with a follow-up title to her 1960 masterpiece, To Kill a Mockingbird. Conveniently "discovered" shortly after the death of Lee's sister, Go Set a Watchman turned out to actually be an early draft of Mockingbird. It's strongly suspected that Lee's lawyer may have taken advantage of her client. Whether or not Lee was healthy enough to have given consent for the book's publication remains to be decided. Either way, the book was predictably terrible. Brilliant Books even went so far as to offer full refunds to any customers who felt duped by misleading marketing:

It is disappointing and frankly shameful to see our noble industry parade and celebrate this as ‘Harper Lee’s New Novel’...This is pure exploitation of both literary fans and a beloved American classic (which we hope has not been irrevocably tainted). We therefore encourage you to view Go Set a Watchman with intellectual curiosity and careful consideration; a rough beginning for a classic, but only that.

Thankfully, enough people set bags of dog feces on fire on the creator's front porch, and the app was canceled. Hooray!

Uh-oh. Here's the opposite of "hooray": Writing legends Terry Pratchett and Ann Rule unfortunately passed away this year. I grew up reading Pratchett, and his death hit me pretty hard. The only way we can cope during these times is by continuing to read the work they left behind so their names are not forgotten.

Earlier this year, as Amazon's contract with HarperCollins neared expiration, the two companies refused to see eye-to-eye on many important issues. Headlines of BATTLE and WAR littered social media. We were promised a blood bath for the ages. Then they quietly came to an understanding and everybody was left disappointed.

The KKK Sad Puppies are a group of white supremacists science fiction writers set on fixing the Hugo Awards. They are very pathetic nerds who won't be satisfied as long as people other than straight white males are represented in science fiction. Keep the genre pure, they say. Heil Hitler, they probably also say. Our penises are tiny and we need to make others feel miserable to satisfy ourselves, they almost definitely say. So, in 2015, they managed to get Puppy nominees in almost every category. Because of this clusterfuck, many categories were given "No Awards".

Hey, speaking of racists. This year also saw a very nice and welcome change: Lovecraft was removed as the model for the World Fantasy Award. Many non-terrible people celebrated this victory, and many other terrible people whined about it. Especially ST Joshi, whose recent blog posts are both hilarious and sad. It's still unknown what will take Lovecraft's place as the trophy model. I've already suggested myself, but have yet to hear back. I've also heard many people suggest a dragon, but dragons as we all know, are lame. Honestly, a giant dong might be the way to go.

You heard that right, baby! We done good. Reaaaal good.

From Rob Hart's announcement back in April:

Not only did we make the list, but we got a special distinction. Said list is broken into sections, and we were highlighted under the Online Writing Communities section—in a pretty purple boxed marked "Best of the Best"!

Best of the best! Next year, I can only imagine the list will be renamed "Why LitReactor is the Only Website for Writers that Matters". Mark my words, y'all. MARK 'EM.

We all know a Goosebumps movie was recently released, but I don't care about that. What I do care about, however, is this absolutely amazing rap song appropriately titled "Bumps Gonna Goose Ya". Forget about anything else that has already happened or will happen this year. "Bumps Gonna Goose Ya" is the best thing of 2015. The best.

What was your favorite literary news item of 2015?

Since when does the KKK allow Portuguese women, Hawaiians, Armenians, blacks, and those married to non-whites, to join its ranks?

Also, how long have Sarah Hoyt, Kate Paulk, and so many other women have tiny penises?  Or did you confuse penises with a throbbing veiny ten inch clit?

Booth is projecting about his own tiny racist Nazi penis. I confirmed that with the hookers at his lucrative hotel night job.

For your employers sake I hope you don't make up numbers like you made up that article.

These clips from movies are very interesting and ispiring us to watch it wheneer we have free time from canadian resume and jobs. Because these actors and actresses always appear in very famous and block buster movies.

In more established men, erectile brokenness has a tendency to be dealt with as either "only a unique little something" that occurs with maturing or accordingly of a particular physical cause. In more youthful men, specialists have a tendency to accept the issue comes about because of passionate or mental issues, or from way of life elements, as opposed to physical ones. Generic Viagra