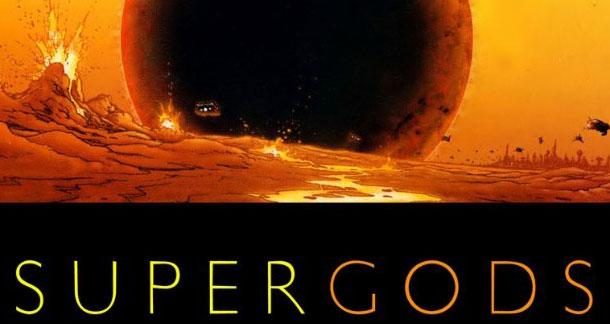 Sometimes you read a book and it changes the way you read everything else. Your perceptions are forever altered and your literary history is cleft in two: what you read before, and what you read after. Even when you take old favorites off the shelf, under the dust you’ll find a shiny new layer of meaning that will make you shake your head and laugh at your old, unenlightened interpretations.  As a devout apostle of Superman for more than twenty years, I thought I’d seen it all—the Death and Return, the super-mullet, Electro Superman, President Luthor, New Krypton, and so much more. And not just Superman—DC or Marvel, I read them all. I wrote academic papers about the X-Men and Doctor Doom, and started a blog to write about all the rest. I believed I understood this superhero game. But then I opened up Supergods and Grant Morrison totally dropped some knowledge on my shit. Comic books were no longer simple pulp fantasy, but a slice of a parallel universe rendered in paper and ink, a constantly evolving reflection of the subconscious of an entire culture. With my understanding thus expanded, I returned to my all-time favorite Morrison story, the epic superhero event Final Crisis. It was like I had been upgraded to 4D vision and suddenly I saw a whole new dimension of metafictional significance that I had never realized was there. In many ways, Final Crisis is a master thesis on the genre, expertly disguised as a classic crossover. Supergods looks under the mask to discover its secret identity—a story about the power of stories. Let’s see what these two books can tell us about each other, but be warned: SPOILERS AHEAD.

Supergods is, at its core, the biography of an idea. The modern superhero. Where did this idea come from, and what is the source of its power? Morrison leads us through a remarkably well-researched history of the illustrated imagination, equal parts curator of the obscure and tour-guide to the extraordinary. He pauses here and there to identify pillars of the art, providing detailed etymologies for its most popular characters. He also shows a flair for describing the shifting persona of the form throughout its many different ages, able to capture the essence of a cultural movement in under a sentence. Indeed, the compression of many ideas into single thought is a dominant theme in most of Morrison’s work, as if he were testing symbols to see just how much significance they can hold.

Nowhere is this talent better displayed than Final Crisis. The book begins with an iconic scene: in prehistoric time, Anthro, the cave boy, receives the gift of fire from Metron, scientist of the New Gods. Armed with the god’s gift, Anthro drives a pack of marauding Neanderthals from his home. Fast forward to the present day, where we see Detective Dan Turpin light a cigarette as he narrates: “You ask me, fire was our first big mistake. Like everythin’ else the sad, stinkin’ human race ever thought of… we take a good idea and we use it to kill ourselves.” In six succinct, nearly-wordless pages, Morrison has summarized the history of human knowledge and introduced the central theme of Final Crisis, and quite possibly all of his writing: the otherworldly power of an idea, and how easy it is to manipulate.

One of the first, and best, stops on the Supergods tour is a thorough deconstruction of the first appearances of Superman and Batman, arguably the birth of the superhero genre. Morrison picks apart each panel element by element, finding the roots of the superhero mythos not just in pulp and science fiction, but also ancient mysticism, occult symbols, and even the gods themselves. With surgical clarity he proves the anatomy of the superhero is largely composed of the most powerful parts of older ideas, wrapped in a cape and stamped with a flashy logo—a new god for a new age. Man originally created gods to control what he could not understand, things like lightning and death. Now we make up superheroes to fight our fears for us. Superman was a savior for a world at war. Batman was knighted to fight urban corruption and criminal insanity. Captain America enlisted to punch out Hitler, the real world’s first global supervillain. In the introduction to Supergods, Morrison recalls growing up in fear of the Bomb, but his apocalyptic anxiety was partially abated by comic books. “Before the Bomb was the Bomb, it was just an idea. But Superman was a stronger, better, faster idea.” If the superheroes could do it, it didn’t seem so impossible, because everything always began with an idea. Superheroes told us that if we could think it up, we could make it happen. That is a concept at once both hopeful and horrifying.

Not all of our ideas are good ones. Just as we created superheroes to fight our worst fears, our imaginations spawned villains to personify them. For every character that embodied our loftiest ideals there was an army of bad guys representing our basest urges. Billed as “The Day Evil Won,” Final Crisis is a superhero fable, a cautionary tale about the consequences of indulging in our darkest thoughts. Darkseid, the ultimate interstellar despot, has resurrected himself through the ruination of a noble soul and unleashed the Anti-Life Equation, mathematical proof that he is the rightful and uncontested master of all reality. The Equation is a weaponized thought, broadcast through every television, radio, computer and phone, and it destroys all free will on contact. With an idea, Darkseid enslaves the world. Superman is missing, Batman is dead, and Wonder Woman is in the thrall of an evil god. The world doesn’t get much more doomed than that.

In Supergods, Morrison describes Final Crisis as a response to a growing culture of nihilistic pessimism. Comics were obsessed with answering the question “what if the villains already won?” Dystopian literature and post-apocalyptic movies are a rising trend for the first time since the 60’s, and news channels choke with stories of war, suffering and corruption reported with bored indifference. Stories of failure, guilt and violence dominate our culture right now.  In the age of instant communication and 24 hour news cycles we are bombarded with images of the futility of life in a brutal world, until we’re finally convinced of our utter hopelessness; the Anti-Life Equation is the same thing on a cosmic scale.

The ultimate battle between good and evil, being and nothing, existence versus oblivion. An evil god is dying and all of reality is sinking into his black hole of a heart. Entire universes hang in the balance. The stakes have never been higher, but no story is too big for Superman. He and the legions of heroes he has inspired do what they were designed to do—they save the world, no matter what. Wonder Woman frees herself from control and overthrows her captors. Just for the god of evil, Batman breaks his no guns rule. And as Superman once again makes the ultimate sacrifice we see his tombstone, which accurately reads “TO BE CONTINUED.”

In the pages of Supergods and Final Crisis, Superman’s greatest power isn’t his strength or his heat vision. It isn’t his unrelenting optimism, either. It’s his story. An orphan sent from a dying world who grows up to become his adopted home’s greatest champion. It’s the ultimate tale of the American dream in action. Clark Kent made us believe there was a hero inside all of us, just waiting to rip off their shirt and save the day. As Superman has proven time and again, heroes may die, but legends live as long as they’re told. He symbolizes the very best of us—he’s selfless, brave and honest. He doesn’t just hope things will get better—he knows they will because he’s going to do something about it. Telling stories about Superman reminds us of these traits and helps us find them in ourselves, inspiring us to try and live up to the example of the world’s greatest hero, a man who never lived but wasn’t any less real for me or millions of other readers. My comic books are no longer just about brightly attired superpeople punching each other—with Grant Morrison’s help they are the history of a parallel universe, the building blocks of a constantly growing and changing hyperstory that is more than the sum of its parts. Also known as a myth. I will always be grateful to the superheroes for providing these myths, these ideas powerful enough to protect me in a rational world that often acts insane. It is no small comfort to know that Superman is always watching us, only as far away as the local bookstore.