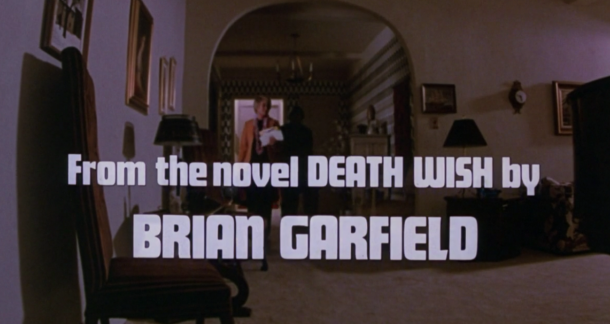 Taken at face value, Brian Garfield’s 1972 novel, Death Wish, might read like NRA propaganda. Especially if you’re relying on its 1974 film adaptation to guide your opinion. Charles Bronson has long been an icon for tough guys. Men who shoot first and ask questions later, if at all. A real hero without a conscience, a gun-totin’ badass motherfucker who won’t hesitate to slaughter any criminal stupid enough to cross his path. It’s never clear to me why some people love the Death Wish series so much. Surely for most, these films are pure brainless fun. New York grit. But for others, it’s easy to picture some fans viewing the film under a different perspective. The kind of people who might watch Death Wish and think, “Finally, someone who gets it!” Not necessarily people who are inspired to go out and buy a gun and mimic Bronson’s actions, but it could certainly serve as masturbation fodder for those who already possess their own private arsenal.

The source material plays the same dangerous game, although I’d argue that where the film fails, the novel succeeds with a justified—yet terrifying—ending. Incorrectly labeled as a revenge story, Death Wish instead shines its spotlight on the subject of vigilantism. Never once, in the novel or original film, does Paul Benjamin/Kersey seek out the home invaders who murder his wife. The concept of crime itself is targeted, as if it’s a character of its own, embracing myriad manifestations. The impulse is natural and relatable for anybody who’s ever read a news story about a particularly gruesome act or, of course, have been directly involved in one themselves.

“Wouldn’t it be great if someone went out and killed these crime-lovin’ bastards?”

It’s the premise for an endless onslaught of books and films for a reason. Well, actually, two reasons. The first being that the fantasy is shared among many, and the other reason being that a lot of creators are extremely lazy and don’t have an original bone in their bodies. I’m looking at you, Troy Duffy.

The differences between the novel and adaptation are peculiar, and Brian Garfield’s distaste for the film is justified. For an example, you’d only need to watch the first ten minutes of the film and read the first three chapters of the book. The film’s beginning features a violent, distasteful rape scene with Paul’s daughter, also resulting in the death of his wife. However, in the novel, we discover this act of savagery via a phone call, which is arguably the more effective narrative decision. Sometimes a story achieves a far greater impact on its reader by making their imaginations exercise, rather than walking them through the plot like an infant—an infant who loves watching Jeff Goldblum rape women (they’re out there).

In a bizarre turn of events, however, Paul’s marriage makes more sense in the film than it does in the novel. In the film, we’re given a brief prologue of them at the beach, whereas in the novel we never actually meet his wife. In fact, as the narrative continues, Paul starts to realize that he might have not even loved her, and held a hilariously pathetic grudge against her for gaining weight over the years. At least in the film, the dude loved his wife.

This is less of a novel about mourning than it is about rage against New York. Paul Benjamin is absolutely not a hero. He’s not even an antihero. He’s every right-wing gun nut’s wet dream. He’s George Zimmerman stretched to his most monstrous potential. Viewed under the right perspective, Death Wish becomes less of a story about street justice and more of a straight-up horror slasher. Paul Benjamin transforms from an accountant to a full-blown monster. The vigilante seeds are planted early on in his head, and they continue to blossom until he loses his goddamn mind and begins hunting people with a handgun. Of course, they’re not people in his mind. They’re thugs. They’re scum. They deserve to be wiped off the face of the Earth. Sound familiar? Of course it does. It’s the mantra of the middle-and-upper class. This total lack of empathy is nothing new. “Those who commit crimes should be killed. If they didn’t want to face the consequences, then they shouldn’t have broken the law.” Sick to your stomach yet? If not, you might be one of them.

Where the novel and film differ the most drastically is the ending. In the film, Paul’s shot multiple times while hunting his latest victim, and is laid up in a hospital bed. The detective investigating the case approaches him and tells him to get out of New York, but other than that, Paul faces zero consequences. It’s almost a Disney ending. Everything works out. Paul lives, the police let him go, and a bunch of poor minorities are successfully gunned down in the streets. Hooray!

Now, the novel, on the other hand: by the time it draws to a close, Paul has gone past the point of insanity. After reading an overly long psychologist profile in a magazine that basically defines his every characteristic, he panics and rushes out “into the ghetto” to do what he does best. Only this time, he strays from his typical M.O. of shooting muggers and instead targets a group of unarmed children caught throwing rocks at a passing train. He executes each and every one of them without a single hint of remorse. There is no turning back for Paul. He’s turned into the thing that enraged him the most.

Garfield’s initial inspiration for Death Wish arrived one day after leaving his publisher’s penthouse apartment and discovering the roof of his convertible “slashed to ribbons.” He was then forced to drive three hours back home in a roofless vehicle during a terrible snowstorm.

Of course by the time I got home and thawed out, I realized the vandal must have had a strong sharp knife (convertible-top canvas is a very tough fabric to cut) and in reality I didn't want to be anywhere near him. But then came the thought: What if a person had that kind of experience and got mad and never came out of it? I thought at the time that the impetus needed to be something stronger, more personal than the slashing of an impersonal canvas car-top, but later I've become aware that the very triviality of the crime would have made much clearer the point of the story. Anyhow that was its provocation. The hero, or anti-hero, set himself up to clean up the town. I felt a sort of sympathy for him, but right from the outset it seemed clear enough to me that he was a nut who kept becoming nuttier.

Now, with that said, today is the release of Death Wish The Remake. It will be very interesting to discover what direction the writer and director chose for this new vision. Will we see a retread of the original film and its insane sequels, or perhaps a more quiet take, something similar to its source material? I guess we’ll just have to wait and—

Haha, what the fuck.