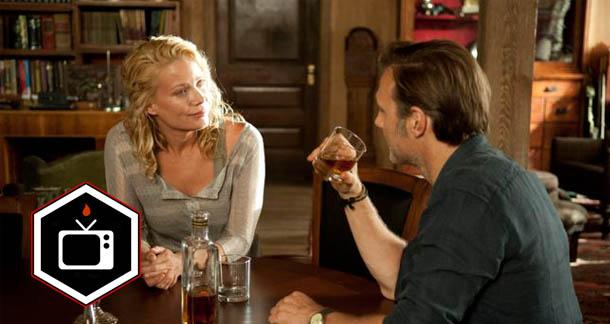 Oh, Merle, how we have missed thee.

This speaks to the strength of Michael Rooker. It's commendable how he can make you glad for the return of a racist psychopath. There was something incredibly endearing to him tonight--maybe because the writers are toning down the cartoonish nature of the character, and playing up the actor's charisma. He's also helped along by the badass knife arm that's replaced the hand he hacked off back in the first season.

There's something inherently comforting and trustworthy about [the Governor], but as the episode wears on we see the chips in the veneer. Especially when he gets to his secret zombie room.

He was easily the best part of a solid episode, where we forsake the prison completely to follow Andrea and Michonne, and finally meet the Governor, a character from the comic who portends a great deal of suffering for the show's core group of survivors.

And thus far, the television version of the Governor is a marked improvement over the source material.

The Governor of the comic book was pretty nefarious, and the first real introduction to a major theme of the comic: people trying to survive are much more dangerous than zombies. But he was also an awful caricature. He did terrible things for the sake of it. There was no subtlety, no sense of motivation. I know there's a comic or novel tie-in about the character's back story, which I haven't read, but that doesn't change the main comic, where he was way over the top.

David Morrissey's Governor, introduced for the first time last night, is a much different beast. There's something inherently comforting and trustworthy about him, but as the episode wears on we see the chips in the veneer. Especially when he gets to his secret zombie room.

I only know Morrissey from The Next Doctor, an episode of Doctor Who where he played a bumbling, good-natured character. This is essentially the opposite of that, and he comports himself pretty well. The obvious choice for this role would have been to stunt cast, or pick someone who would play it to the hilt. Morrissey is a little more subtle. He's a good choice.

And whereas the Governor moniker felt a little precious in the comic, here it's put to good use: he's a true politician. After slaughtering a military envoy to loot their supplies, he lies to the people of Woodbury, saying he found them dead. And he uses their deaths as a method of control: the envoy didn't have the protection he provides them, that's why they were dead, and in honoring them everyone should remember how thankful they should be for what they have. It's creepy and fantastically effective.

The women in this episode didn't impress as much as Merle and the Governor. Andrea serves the thankless role of audience surrogate, asking questions so that we, the viewer, can learn about the town of Woodbury, the fortified settlement of survivors led by the Governor. Though we do get a peek of where Andrea's head is at: she says she was left behind by the other survivors, and maybe that's why she's so ready to trust the Governor.

Michonne, meanwhile, is a bit of a disappointment. She's badass, sure, decapitating her zombie pets without hesitation, but she didn't do much more than glower. How many times did she ask for their weapons back. Like, six? The writers are planting the seed for a little pathos--clearly she had some sort of attachment to her zombie bodyguards--but so far, she's not much more than a nod to the fans. She's this show's boomstick--awesome for the sake of itself, and not yet much more than that.

And a couple of moments felt forced. The conversation between Andrea and The Lady Who Carries the Town's Clipboard seemed to be geared toward a bigger idea, about the moral compromises we make so our leaders can protect us, but it's glossed over way before the point is made. And then there was the awkward breakfast between the Governor, his friend, Michonne and Andrea. The tension was more assumed than earned. Sure, they're all feeling each other out, but those dramatic pauses were a little absurd, and I'm pretty sure they weren't meant to be absurd.

These things aside, it was another strong episode. When Andrea told Merle about the farm, it was a nice reminder of how far along the show has come: no more whiny people complaining, more character study against the backdrop of a zombie apocalypse. And this season is only three episodes in, so it's still moving through a lot of scene setting. I'm looking forward to seeing what happens when things start to veer out of control.

So what was good? What was bad? What did you like? What didn't you like? Vote for your pick for badass of the week, and discuss the episode down in the comments!

I think you summed it up rather well. I love the Governor character, but Merle is irking me a little because I'm not sure which way he'll go. I guess that's a good thing, with the tension and whatnot that the uncertainty creates. I wish Andrea would do something other than whine and look thoughtful or tormented. I did not like Michonne's character in this episode. While they might be foreshadowing something, her entire demeanor and the repeated "give me my weapons back" made me wish someone would just lop off her head and stick her in the Governor's zombie room so I don't have to endure another stony silence that does nothing to further anything.

That scientist guy looked like a poor-man's Ben Linus. In fact, the whole town has a kind of Dharma Initiative/Others vibe. The Governor and his people should get on building a sonar fence asap.

I agree with what's been said about Michonne this episode - While I understand they want to emphasize her lack of trust and the feeling of vulnurability that she has with the loss of her weapons, they could have done that without repeating the same line 30 times.

But, that being said, the past three hours of The Walking Dead have been some of the best written in the series. This time last season, I was willing to give up on it. Now I'm suitably intrigued.

I really love the Governor and am shocked by how happy I was to see Merle. Racist pricks annoy the hell out of me, but in a show like this he can be beneficial to the development of drama and potential fuel for chaos. Andrea and Michonne need more to do, as pointed out. They are boring right now, though I agree that it was badass when Michonne cut the heads off of her walkers.

Anyone else feel annoyed during the breakfast scene when Mr. Scientist kept filling his cup with tea? He did it several times and didn't even drink any of it. Must be a bottomless cup, because he practically drained the entire pot into his cup. They kept talking about the tea as well, which is either a very heavy handed hint that something is up with the tea or a pathetic attempt at casual dialogue. We shall see. Do you like the tea? I love your tea. More tea? Your tea is the bestest. I only keep you around, because of your tea. Oy vey!

Excited for the next episode :) I'm ready for more action and badassery.

Mad scientist during breakfast, either dude loves his tea or he was clamoring hard to have everybody notice his newfangled pour-from-the bottom tea dispensor.

Cripes!  I only just discovered these articles moments ago but was quickly a fan of them. Prepared to warm up the coffee, hunker down and read every recap I had missed, I was mildly crestfallen to only track down three.  (If you're hiding them away somewhere, do let me know.)

I hope when the show returns in February, so, too, does your recap, Rob.  This is fantastic stuff, sir; a truly enlightened review of the show and a far superior product to "The Talking Dead".