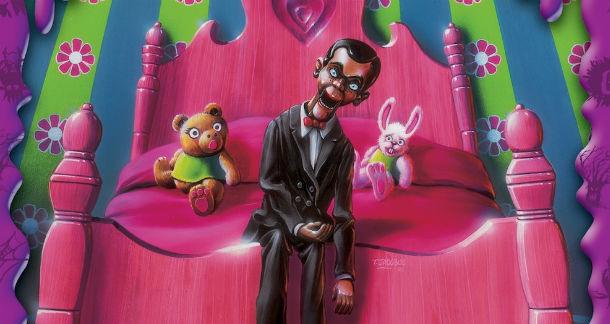 When I was seven years-old, my parents took a trip to a library book sale. They came home with a box specifically for me. Either my mom or my dad said, “I don’t know if you want these, but they seem like something you might like.”

The box contained all sixty-two copies of the original Goosebumps series, written from 1992 to 1997 by R.L. Stine.

At that age, I was understandably not the best reader. I hadn’t attempted a chapter book yet. But one look at the gloriously cheesy and awesome covers illustrated by Tim Jacobus and I knew I needed those things in my life. I have no idea how much my parents paid for this box, but it is quite possibly the greatest thing they’ve ever done—except for having sweet, nasty sex 10 ½ months prior to my birth, I guess. Also, yes, I was born in the early ‘90s. Stop giving me that look.

I think the first Goosebumps I read was Say Cheese and Die! (#4 in the series). The cover depicted a family of skeletons having a barbecue. The scene seemed natural, yet at the same time unsettling. I read the thing in a day, which isn’t too impressive when you consider each Goosebumps title was really more of a novella than a full-length novel. But let me tell you, when I reached the end of that book, I couldn’t have been more proud of myself. I’d just read a book. Not some twenty-page long book with cute illustrations. This was a real book.

I owe R.L. Stine my soul. Although, knowing him, he probably already took it from me while I slept.

I don’t remember how long it took me to read that whole box, but I can tell you pretty soon I was scavenging through my library for any other titles by R.L. Stine. To my delight, I discovered not only had he written sixty-two books under the original series, but he had branched out into various spin-offs, such as Give Yourself Goosebumps, which was my introduction to everybody’s favorite “choose your own adventure” type of story. [Side-note, you should definitely read my choose-your-own-adventure erotic ghost story, “Choose Your Own (Happy) Ending”, originally published in Fur and Fang.] Plus, you know, he was also the author of the very cool Fear Street series, but this article is about Goosebumps, so I’ll try to contain my fandom.

There was something about the Goosebumps books that made me feel safe. The artwork on the front was always weird and different from anything else marketed to my demographic. The stories inside were like PG-rated Tales from the Crypt episodes (which, yes, was one of my favorite shows at age seven. Don’t you judge me. Judge my parents).

He lured kids in with weird-ass premises, but didn’t go graphic enough to piss off any parents. In fact, through the sixty-two books of the original series, not a single person dies. Every book has a happy ending. The main character is always alive. Stine didn’t want to disturb kids. He just wanted to shake their perspectives of reality. He wanted to exercise their imaginations. Most importantly, he wanted to open them up to the wonderful world of horror literature.

Well, that’s what his editor wanted, at least. Truth be told, R.L. Stine never wanted to be a horror writer. Since he was nine years-old, all he wanted to be in life was a comedy writer. And he achieved this goal. Before turning to children’s horror, R.L. Stine published dozens of joke books under the name “Jovial Bob Stine”. He also created a humor magazine for teens called Bananas.

His career, however, changed significantly when his editor requested he write a horror novel for teenagers called Blind Date. The book became a bestseller, which made Stine realize something: this is what people wanted to read. He abandoned the joke books and reprogrammed himself to carry out the eternal duty of scaring children. Honestly, this original desire to be a comedy writer can still be found in his Goosebumps books. Part of the books' appeal was their campy voice—cheesy and delicious.

Once he got going, Stine did not waste time. He began knocking these novellas out at an insane pace, all while also working on his Fear Street books for teenagers (Goosebumps was marketed for a slightly younger audience). In the early days, he was writing one Goosebumps and one Fear Street a month.

I doubt I’ll be the first to make such an accusation, but how certain are we that R.L. Stine isn’t actually some kind of robot? Like, a machine built by the CIA designed to create books scary enough to prevent young children from taking an interest in ventriloquism? I don’t know why the government just doesn't come clean. Would we really be that upset? I mean, Jeff Dunham didn’t have Goosebumps as a kid, and look at how pathetic his life turned out.

This kind of writing productivity reminds me a lot of the great Carlton Mellick III, who has published one book every quarter since...2002? 2003? Come to think of it, Mellick’s fiction is basically Goosebumps for kids who grow up and inevitably get addicted to crystal meth. What I’m saying is, you should go read the dude’s books.

But back to Stine. Beginning with Welcome to Dead House and ending with Monster Blood IV (under the original series), Goosebumps has sold over 350 million books worldwide. A short-lived television show was made about his books. Now there's a movie out with Jack Black cast as R.L. Stine. Hell, there's even a Goosebumps rap.

Why were these books so successful?

When I think back to my childhood Goosebumps addiction, what sticks out the most are the cliff-hanger chapter endings. Every chapter seemed to end with this thrilling twist, and I wasn’t able to simply put the book down “after one more chapter”, because some other crazy shit would happen by the time I finished it. Basically, he James Patterson’d it.

But that’s okay. This cheap trick worked. I fell in love with reading, which directly led to me falling in love with writing. These little books made me happier than anything else back then. Reading enough of them, I soon wanted to try my own hand at writing campy horror tales like my new idol. I figured if he had written so many of these things, then maybe there was a reason for it. Maybe it was fun. And you know what? Writing turned out to be a fucking blast. Better than hitting a home run during a Little League game. Better than ramping my bike off some dirt mound I made in my backyard. Better than beating the latest Resident Evil game. Writing was my thing. It was my life.

Which is good, because without this love for reading, without this need to create stories, I would have almost certainly ended up dead or in jail.

I grew up in a relatively small town that had started acquainting itself with meth and heroin just as I was enrolling in elementary school. Outside the town’s limits, it was not uncommon to find houses blown to shit due to poor choices by uneducated chemists. At a young age, my friends and I decided school was a waste of time, and quickly began experimenting with various illegal activities. Small things at first, like petty shoplifting. Then vandalism. Breaking windows was a favorite. Then my best friend connected with someone much tougher than the rest of us, and suddenly he was dealing at the park. We drifted away from each other soon after that. I had started focusing more on writing. I just didn’t care about anything else. Then, within the blink of an eye, my friend got busted and locked up. A year later, he was released from a juvenile delinquent center. I didn’t even recognize the kid. Within five minutes of seeing him for the first time in over a year, he asked me if I wanted to partner up on something. I didn’t answer, just turned around and walked away. I haven’t seen or talked to him since.

But this is what I know. If I hadn’t found writing, I would not be where I am today. I’d be back in Indiana, probably screwed-up on heroin. Or I’d be in jail for going along with my dumbass friends. Or maybe I’d be dead. I don’t know. There’s no way to know because that isn’t the path I chose. Instead, I found Goosebumps, and Goosebumps introduced me to a reality where I, too, could become a writer.

Although, knowing him, he probably already took it from me while I slept.

THIS. All of this.

Goosebumps introduced me to horror, and also made me realize my love of writing. I've heard of so many other 90s era adults who feel the same. R.L. Stine deserves some kind of superhero cape or something.

Yes Stine is quite a writer. A little dissappointed in Night In Terror Tower (TV Movie), but that's more of my adult cynicism rather than the quality of the book--which is amazing, just throwing that out there. Though I'll book sleeve the last chapter, for a darker ending.

He was a very big influence for me growing up.