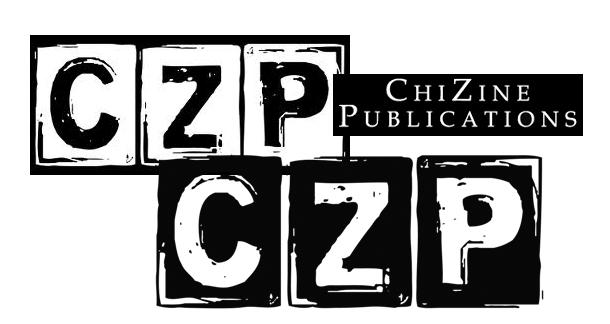 Do you like vampires that poop spangly fairy dust and are apparently resistant to sunlight? Do you like barrel chested werewolves who are emotionally conflicted about being killing machines? Do you like sociopaths who are debonair charmers with 180 IQ’s that leave a calling card whenever they murder someone? Do you like “horror” novels that read like recycled Stephen King or Dean Koontz? Because if you do, you should probably shuffle along to the next news article or feature on the site, because chances are you’re not going to like anything Canadian publisher ChiZine Publications puts out. In fact, chances are you’re going to run screaming from the eclectic catalog of dark novels and collections they produce.

ChiZine Publications (CZP) was founded in 2008 by the World Fantasy award nominated husband and wife team of Brett Alexander Savory and Sandra Kasturi, after a long run of publishing the still popular eZine, ChiZine. They carried their philosophy of publishing only the best weird, surreal, disturbing dark fiction and fantasy that had been a staple of the eZine since its inception in 1997, concentrating on longer works such as novels, novellas, short story collections, and anthologies.

[ChiZine are] spurning everything the big dogs of publishing have long established and are afraid to break away from.

The first two ChiZine Publications I read were Every Shallow Cut by Tom Piccirilli (which also happens to be this month’s book club selection, and even if you don't participate in the discussion, pick this book up, particularly if you're into novelists such as Bukowski and Hubert Selby Jr) and Shoebox Trainwreck by John Mantooth. Both titles were sent to me by the authors. I, of course, was a longtime fan of Piccirilli, and Pic had gotten into the habit of sending me his stuff. (Particularly his “noirellas”, most of which typically broke from his more mainstream work, and occupy a space that his publisher wouldn’t touch with a ten foot pole.) But Every Shallow Cut was, simply put, unlike anything Pic had ever written. It was an emotionally charged genre bender, that in my opinion, signaled a brave new chapter in Pic's long career and made my top ten reads of 2011.

Shoebox Trainwreck by John Mantooth was an equally engaging read. Mantooth had been making waves around the dark fiction scene for a few years, publishing in zines like Thuglit, Crime Factory (I published the opening story of Shoebox Trainwreck, “A Long Fall Into Nothing," back when I was still the financial end of Crime Factory), and more than a few prominent anthologies. Mantooth’s style is dark, rich, lyrical, and exactly the type of fiction the big six (or the big four, or two, whatever) tend to avoid unless your name happens to be Daniel Woodrell or Cormac McCarthy. It was a first rate collection and more than a few of the stories stuck with me long after reading them.

Suddenly it seemed like every book I wanted to read or was reading was being published by ChiZine: Simon Logan’s dystopian epic, Katja From The Punk Band; Tony Burgess' brutal psycho-noir, People Live Still in Cashtown Corners (for my zombie fiction fans, you’ll know Burgess as the same sicko who wrote Pontypool Changes Everything); Paul Tremblay’s debut short story collection, In The Mean Time (and most recently, Tremblay’s intense satire, Swallowing a Donkey’s Eye); Nick Mamatas’s trippy teenage love/hate story, Bullettime; and Craig Davidson’s collection of interconnected stories, Sarah Court. All of these titles were innovative, weren’t afraid to break genre boundaries, and were compulsively readable.

It’s these three aspects of ChiZine Publications which sum up its philosophy to a tee. Here’s the skinny from their website:

ChiZine Publications is willing to take risks. We’re looking for the unusual, the interesting, the thought-provoking. We look for writers who are also willing to take risks, who want to take dark genre fiction to a new place, who want to show readers something they haven’t seen before. CZP wants to startle, to astound, to share the bliss of good writing with our readership... We say "dark genre fiction" because too much time is spent fighting over SF vs. horror vs. fantasy. If there're dragons, it's fantasy...Unless they're bio-engineered dragons, then it's SF... But a dragon apocalypse might be horror... We want stories using speculative elements—magic, technology, insanity, gods, or insane-magic-technology-gods all in one—to show the dark side of human nature. The good guy can feel—and act on—anger, hatred, vengeance just like the villain. Heroes don't always win, conclusions don’t always wrap things up nicely, and sometimes things can take a turn that’s just plain weird... even for the genre.

And that’s exactly what those crazy Cannucks are doing; with each new release they're pushing the boundaries of the unusual, interesting, and thought provoking. They're spurning everything the big dogs of publishing have long established and are afraid to break away from. On top of the constant innovation, ChiZine Publications are also downright ambitious. In 2012 alone they’ve published 17 titles, a number they will most likely exceed in 2013. It was also recently announced that CZP will be launching a YA imprint called ChiTeen in 2014, with The Unlikely But Totally True Adventures of Floating Boy and Anxiety Girl by Paul Tremblay and Stephen Graham Jones being their first release. (Do Tremblay and Jones ever sleep?) Also, a Kickstarter campaign was announced on December 10th to help fund Fearful Symmetries: An Anthology of Horror, which will be edited by the legendary anthologist and author, Ellen Datlow. So if you like your SF, Fantasy, and Horror on the brilliant and bold side, make sure to check out ChiZine.

Fantastic. I adore CZP. Tremblay (In The Mean Time) as well as Craig Davidsion (Sarah Court) are two titles that I loved (and reviewed at TNB), as well as Brent Hayward (Filaria). I actually won a contest based on Filaria at CZP, that was how I first heard about them. They have beautiful books, the cover art, the production. They pick risky titles by authors that aren't afraid of the dark. If you don't know these guys, GET to know them. And pick up something by Tom P as well, I just got Shallow Cut (book club selection for Jan) as the poor man is very sick, fighting cancer. One of the best indie publishers going.

@Richard - Thanks, man, I dig CZP, too. If I can make a quick recomendation, you should check out People Live Still in Cashtown Corners by Burgess. (Hell, anything by Burgess really.) The book actually scared me, which is kind of a tough feat to acomplish these days.

Also, quick note, CZP publisher Brett Alexander Savory contacted me to let me know that The Unlikely But Totally True Adventures of Floating Boy and Anxiety Girl by Paul Tremblay and Stephen Graham Jones has been retitled to FLOATING BOY AND THE GIRL WHO COULDN'T FLY. In Savory's words, the new title is less of a mouthful.

@keith - thanks, i've seen that book a million times, and haven't pulled the trigger. it looks really good. haven't read any of his stuff, yet. i'll see what Santa brings me, and if i'm flush, maybe i'll pick that up. AH, he did Pontypool. just realized that.