Genius Works of Art: How Are Masterpieces Made? 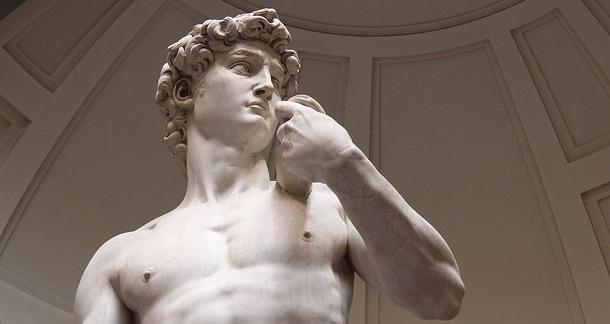 How do we define works of creative genius? For me, it’s an I know it when I see it type of thing. I hear a song, read a book, see a statue and feel a deep sense of awe—a type of sympathetic reverence. A masterpiece leaves us feeling small and unworthy even as it inspires us. Not everyone will agree on whether or not they “like” a work, but most people will acknowledge when one is truly masterful.

These works: how are they made? Are masterpieces built step by step just like mundane works, or are they conceived from on high, executed in a bolt of lightning, existing whole and perfect in the first effort? The poetic, idyllic presentation always skews toward the latter. We picture the author typing madly on his typewriter for two weeks straight with no sleep until the novel is finished, perfect in the first draft. We imagine inventors mumbling and pacing, finally struck by the answer they’ve been waiting for—that perfect piece that falls into place. We, many of us, dream of being one of them, hoping for a visit from the muse, wishing our fingers would take over at the keyboard, that our first attempts will be our last. Is this a reasonable dream?

As an experiment, I decided to take the first three masterpieces that came to my mind and look into their creations. Were they single flashes of brilliance, or were they toilsome efforts painstakingly created for final effect?

I’ll start with Eminem’s hit song “Lose Yourself,” because it was what led me down this path of examining creative genius. “Lose Yourself” is maybe the first work of art that ever made me declare, out loud and unhesitatingly to anyone who would listen, that it was a true masterpiece. I think it’s (literally) genius. Rapping shares a lot of skills with poetry, and the concept of freestyling combined with the romanticized version of what a poet is did something interesting for me: it made me assume that Eminem wrote this entire song in one inspired rush (free flow) and that it was perfect in that take. I assumed it so fully that I actually thought I *knew* it. “Lose Yourself” must have come about in a single, brilliant, un-recreate-able go.

Waiting is the opposite of how masterpieces are made. Genius isn’t delivered; it’s built.

Until I saw the copy of where he’d written his notes, building up the bank of rhymes he uses. (You can actually catch a quick glimpse of it in 8 Mile.) I mean, that’s exactly what I do to build up my rhyming options for some of my poems, which is, in my opinion, the very opposite of romantic and glamorous. Word banks just aren’t mysterious. He uses word banks? Mind blown.

So how long did it take to make this masterpiece? Well, fellow actors on set for the movie do say the verses were recorded in one take—but that was after days and days of him scribbling and muttering and working through the lyrics between scenes, etc. He was working his ass off to get that “one take” recording. Then I did some digging, and found this interview with co-writer Jeff Bass. Bass says, “We started "Lose Yourself" in September of '01, and it came out in '02. So it took about a year, back-and-forth, to complete. A lot of the music was completed but the vocals and the words weren't 100 percent completed by that time. I'd say it took about a year to really develop that song.”

First of all, did you catch that “we”? Not creation in a vacuum—not a thing done solo. Second of all, not a freestyle at all, but a finely-honed finished product. And not a one-take effort, but a full year of polishing to get to that masterpiece. Learning that—that Eminem created this work of artistic genius step by step over time—was perhaps slightly disappointing. It shattered my hyper-romanticized view of what an artistic master is. But much more so, it was liberating. He uses a freaking word bank, like me, and he tinkers with it until the finished product is perfect. I may never be an Eminem, but those are all things I can do. If anything, it made me idolize him less and admire him more. Hard work is much more admirable than some magically inherent skill, don't you think? (Granted, I think he probably has both.)

I’ve had the pleasure of seeing the statue of David in person, and I can confirm that it is truly awe-inspiring. Massive, exquisite, and so grand. Surely it was a divine stroke of inspiration! Wait, what’s that? You say it was… a commission? One of the most famous works of art of all time was made to order?

David was not Michelangelo’s brainchild. Hell, it wasn’t even the idea of the guy before him, who actually started the sculpture. It was going to be one of twelve total sculptures commissioned by an old-timey art council for church. Seriously, y’all, this was contract labor. After two different dudes were hired and ceased working on the project, this giant block of marble just sat there for twenty-six years. Of course, Michelangelo was the one to finally win the bid to finish this forgotten project. How long did it take him?

More than two years. Years. Of presumably full-time work on this single project. Think he roughed it out perfectly and called it done? I’m betting on more than a few months of highly agitated minutiae-critique and nitpicking. I'm betting on research and study and critique and reassessment.

I've already waxed poetic about House of Leaves more times than I can count, so I'll skip the part where I try to convince you it's one of the most brilliant books ever written. I'll skip to my nosing into its creation. Check out this interview by Kasey Carpenter on ChuckPalahniuk.net with Mark Z. Danielewski. I really think it says it all. (And for HoL fans, it’s well worth a read in full!) Was House of Leaves created in a concentrated rush? Um, no. It took Danielewski ten years to write that whale of a novel. TEN YEARS. With no promise of publication. It percolated from philosophical ideas Danielewski was toying with, glimpses of characters he was sketching, a concept he jotted down. He developed and developed, working his ass off nearly every day until ten years later, he had a book.

What’s more, when he finally did land a publisher, he personally flew into town, went to their office, got a computer in the copy room, and spent weeks there learning to typeset so his work would come out just right. He collaborated with the book designers, spending seventeen-hour days (seventeen-hour days!) working his ass off, explaining his vision to them and getting them on board so the final product would be exactly what he wanted. Again, this is after ten years of actually writing this elaborate, ambitious, enormous book. He basically learned an entirely new trade to make sure the finished piece was perfect.

A flash of lightning? I don’t think so. A slow, dedicated climb toward the finished masterpiece? Absolutely.

I won’t go so far as to say that strokes of genius are a myth. They do happen. Ideas sometimes do pop up as if from nowhere. Poems sometimes do seem to write themselves. Paintings sometimes do end up just right on that first try.

I think, by and large, that genius isn’t quick. I think masterpieces are built tediously by very determined people who refuse to quit even when they’re up against insane odds, long nights, and interminable obstacles. That flash of genius concept comes after the work is done. We see only the end, the polish, the masterpiece post-struggle. We see days, months, years of work and it seems so perfect, so complete that we assume it was delivered from on high.

The problem for creators, then, is that we expect the same to happen to us. We wait for it. And waiting is the opposite of how masterpieces are made. Genius isn’t delivered; it’s built.

I think it’s a valuable lesson for artists and creators to learn: masterpieces are made one step a time, taking as long as they need, just like any piece. The impression of wholeness and perfection comes later, from the outside. The bad news, of course, is that we almost certainly won’t ‘accidentally’ create the next genius work of art. But the good news is we can stop waiting around and actually set out to try. Success isn’t guaranteed, but isn’t it kind of freeing to know that we aren’t somehow inherently barred from the halls of masters?

What's your favorite work of creative genius? Do you know how your go-to masterpiece was made?