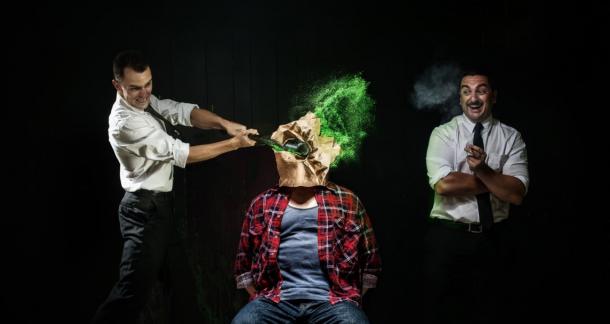 I suppose I walk that line between comedy and cruelty because I think one illuminates the other. We're all cruel, aren't we? We are all extreme in one way or another at times and that's what drama, since the Greeks, has dealt with. I hope the overall view isn't just that though, or I've failed in my writing. There have to be moments when you glimpse something decent, something life-affirming even in the most twisted character. That's where the real art lies. — Martin McDonagh

Hell on Earth is being trapped in a house with someone you hate, especially if that someone happens to be a blood relative. For whatever reason, legitimate or fictional, you cannot leave. You cannot catch a lousy five seconds of alone time. Not having a chance to breathe—to really, truly breathe—without risking the chance of a family member nagging you about something inconsequential...well, there’s really no point in going on, is there?

At least, that’s what you might come to believe after binge-reading the rich bibliography of Martin McDonagh, perhaps best known for his most recent film, Three Billboards Outside Ebbing, Missouri (as well as his other two directorial efforts, 2008’s In Bruges and 2012’s Seven Psychopaths). While casual McDonagh fans are more than familiar with his films at this point, perhaps now is a good time to remind y’all of McDonagh’s talent as a playwright, which is how he originally got his start as a professional storyteller back in the mid-’90s.

While some writers prefer to stick close to home, McDonagh discovered the restraints loosening by completely discarding his surroundings.

In his early twenties at this point (he turns forty-eight in a few days), McDonagh took advantage of government welfare opportunities while obsessively trying to figure out what kind of writer he aspired to become. His first love, film, seemed to take a backseat as he attempted his hand at novels and short stories with no real success. Realizing his major strength shined brightest in the form of dialogue, he leaned toward the one medium he preferred the least: plays. And it should come as no shock to anybody that he knocked them right out of the fucking park. McDonagh’s dialogue is truly unique, unlike anything you’re likely to find elsewhere. He manages to capture the oddity of everyday life in this almost quirky, poetic style fueled by repetition and non sequiturs. Plus, because most of them are written in very heavy Irish accents, they are a load of fun to read aloud, especially around your significant other in an attempt to annoy the piss out of her (I'm not sorry, Lori).

Born and raised in London by two Irish parents (along with older brother and writer/director, John Michael McDonagh), Martin found success by setting his plays in locations mostly unknown to him. A dislocation of place allowed for a wider criteria of character choices. With familiarity absent, a new freedom arrived. While some writers prefer to stick close to home, McDonagh discovered the restraints loosening by completely discarding his surroundings.

First came his (now infamous) Leenane Trilogy: The Beauty Queen of Leenane, A Skull in Connemara, and The Lonesome West. Three plays all set in Leenane, a small town in rural Ireland, connected by a fully developed cast of characters popping in and out of each other’s lives, main characters in one play only meriting a casual mention in another’s conversation. Like most of McDonagh’s writings, the Leenane Trilogy focuses heavily on family—specifically, the deterioration of family.

In The Beauty Queen of Leenane, a mentally ill woman and her narcissistic mother live together, coexisting within a perpetual screaming match. The mother needs her daughter because she fears loneliness and enjoys having someone around to do everything for her, and the daughter needs her mother because the state won’t let her live alone anymore. Both are emotionally (and sometimes physically) abusive in their own special, twisted ways. The drama increases once a man comes into the picture and steals the daughter’s affection.

A Skull in Connemara deals with a professional gravedigger assigned to unearth his own wife, who he may or may not have intentionally killed several years previously in a drunk driving accident. Partnering up with him on this task is a wiseass teenager whose claim to fame involves having cooked a goddamn hamster.

And The Lonesome West, a play McDonagh penned before the other two despite it taking place afterward, shines a spotlight on two middle-aged brothers in the fallout of their father’s death. Of course his death wasn’t exactly an accident. That’s the thing about Leenane you come to understand, the more time you invest into this town. People seem to drop dead with the same frequency as houseflies, and almost every single one of them were secretly murdered by some lunatic (it’s important to keep in mind that the only people who live in Leenane are lunatics). Bludgeonings are as routine as simple fender benders.

What makes McDonagh’s writing so captivating is that nearly every character is hiding some sort of devastating secret. In The Lieutenant of Inishmore, an ex-member of the Irish National Liberation Army is interrupted from torturing a drug pusher with a phone call from his father back home, who informs him his cat—his dearest friend in the whole world—is suddenly very ill. He drops what he’s doing immediately and rushes home, only to learn that the cat is long dead after finding another decoy cat painted black. Who killed the original? Well, there’s a couple suspects. Each one of them with weirder and weirder motivations.

We’ve barely covered half of his plays in this article. Not all of them are so easy to find. For those new to his work, I highly recommend tracking down The Beauty Queen of Leenane and Other Plays, which includes the entire Leenane Trilogy, and also The Pillowman, a severely fucked-up play about a short story writer being accused of serial murder in a totalitarian police state.

What’s your favorite Martin McDonagh play? Sound off in the comments.

Jane Wiseman from living outside of Albuquerque/in Minneapolis is reading Look to Windward by Iain M. Banks March 27, 2018 - 12:09pm

I love The Cripple of Inishman--your discussion of McDonough's blend of comedy and cruelty seems like a good place to start with that play, although it's been a long time since I've seen it, and I'd have to read it or find a production of it to make more sense about it in these comments.

However--is there a better movie than In Bruges? I think I recently read an article disparaging that film--not on this site, I hope. Nooooo! It's just about perfect. I'm sitting here right now thinking of each of the main characters and alternately wincing and falling down laughing. Even the minor characters are amazing. I will never say the word "alcove" again without thinking of that twisted arms dealer.

Thanks for a fun and informative article.

In Bruges is amazing and so under-rated - should be required viewing!

And 3 billboards should have won over The Shape of Water in my view.