Everybody Hates You: Using Empathy to Write Realistic Characters 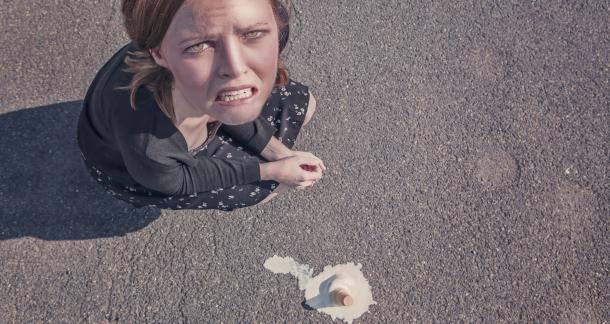 At my hotel gig, a situation I run into quite frequently involves attempting to check-in a guest while they’re talking to somebody on their cell phone. The guest will typically enter the hotel, already on the phone, and toss their license on the front desk. Direct eye contact with me is unfathomable. Any sort of recognition that I’m a human being and not another automatic robot designed to satisfy their every need is a laughable dream. This is irritating, frustrating. There are many questions I need to ask this guest before I can complete the check-in process. Even if they already have a credit card on file, I still need to swipe the credit card again. I need to inquire about the purpose of their stay. I need to inform them of breakfast hours and the Internet passcode and various other amenities. However, even when I try to gain their attention they shun me, like a small child trying to impress their overworked parents with crayon drawings.

Being ignored is a direct cause of anger and depression. We all believe we are the center of the universe, and when this delusion is shattered by something as irritating and harmful as neglect, it beats the shit out of us. Few things are more dehumanizing than someone refusing to acknowledge our existence. We all share this rock together. We all burn under the same sun.

This is where the old “write what you know” expression comes into play—the correct way it is meant to be used.

The truth none of us are willing to admit is that, while we all view ourselves as the protagonist of our life stories, there are an infinite amount of other stories being written at the exact same moment, and the significance of each one is incomparable. What doesn't matter to you matters a great deal to someone else, and vice versa. It is extremely difficult for myself to recognize that, because I tend to view others as side-characters in my life, others will thus view me as a side-character in their own. Maybe this is common knowledge to others, but for people like myself who spend the majority of their time isolated with only their thoughts to keep them company, this can be a difficult truth to keep within reach.

If every one of your characters does not view themselves as the main character of the story, then you have failed as a writer.

Nobody’s duty on this planet is to serve some other person. We are all serving ourselves, in one way or another. We all have our own desires. Our own plots.

The rude guest on his cell phone does not see me the same way I see myself. He doesn’t see the hero to an uneventful, anticlimactic story about owls and breakfast tacos. He sees a blurry face whose sole purpose on this Earth is to further delay the time it takes for him to walk into the hotel and to enter his reserved room. To him, I am a film extra unrecognizable in the background. The guy on the subway reading a newspaper with one leg crossed over the other. Instantly forgettable.

Now let’s say there’s an issue with the reservation. Maybe the credit card he gives me is declined, or the type of room he reserved had been sold to another guest sometime earlier in the day. Now I’ve delayed his plot. This was supposed to be a simple process. Maybe he’s on the phone with somebody important, maybe he’s just shooting the shit with some girl he hopes to one day fuck, I don’t know—the phone call is important to him, and that’s all that matters. Now not only does he have to delay entrance to his room, but he also has to interrupt his phone conversation to further deal with what he expected to be a brief and forgetful moment in an otherwise significant story. Imagine Atticus Finch attempting to check into a hotel, only to be delayed thanks to the desk clerk having trouble locating his room key. Nobody wants to read about him standing at the front desk, sighing with impatience. No, we want to skip this scene and fast-forward to the cool bird-fighting chapters.

So, understandably, the guest is pissed. He is pissed the same way he might get pissed if his WiFi was slow or his car battery died. He paid a certain amount of money for these things and he expects them to do their jobs without any issues. Now I’ve become yet another problem in an ocean of problems that should not exist.

Thinking of the guest with the cell phone in this manner does not comfort his inevitable temper tantrum any more than showering the wilderness in gasoline extinguishes a forest fire. But it does help us understand why the guest reacts this way. Many times a guest will shout at me and slap the front desk and I will be left baffled. I think, what kind of human being treats another human being this way? And the answer to this is: all human beings. Because when Person A is expecting some type of service from Person B, Person A no longer views Person B as a human being, but as another machine with specific coding installed to exclusively serve Person A without failure.

And the truly terrible and funny thing about all of this is that, meanwhile, I’m viewing the guest as somebody who has interrupted my own story. I don’t want to be stuck dealing with this asshole any longer than I need to. There are other tasks I’d like to accomplish and cross off my neverending list of shit. Because he or someone else screwed up somewhere down the line and I have to deal with the problem, I am bitter and my hate for this guest increases. I hate the guest for no other reason than he is standing in front of me and is not already in his room. And the guest hates me for the same reason.

We are two main characters clashing against two supporting characters.

We are fighting ourselves, pissed at the reflection in the mirror.

If I can keep this in mind, maybe the next time a guest screams at me about something beyond my control I won’t completely break down and spend the rest of my shift wishing I had some whiskey. The ability to not only understand empathy but to utilize it as much as possible is essential in not losing what little of our sanity we have left to lose.

If you want any chance of writing believable characters and stories worth reading, then being able to empathize with all of your characters must be your top priority.

Because if your characters aren’t real to you, why would they be real to anybody else?

Happy International Day of Happiness! Why Don’t We Want to Read it?

I'm surprised there were positive comments on this. All I'll personally is that's why I write novels as collections of short stories at first. By this I mean the 'side-character' must being able to exist without the assistance of the MC--essentially being their own MC.

In this way I can see how a new character works if the MC is viewed as a side character. So I end up with a novella that utilizes this kind of 'deeper objectivity' than I could otherwise achieve through pure third person omniscent.

This is an awesome example! I loved your article, is so vivid that makes very easy to understand the issue about the empathy and creation of 3D characters. Thanks!