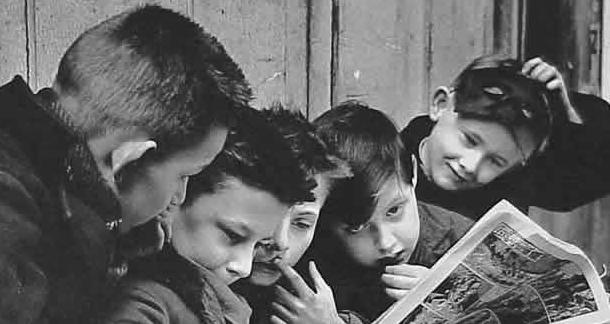 Comic adaptations of science fiction novels are frustratingly rare. This is odd, because It would seem like the worlds of literary Science Fiction and comic books have a lot in common. After all, both are relatively geeky pursuits that often involve speculation about the future, high-concept plots, and - hopefully - robots. Additionally, readers of comics and sci-fi are both very used to defending their favorite titles against every disparaging label from the euphemistically loaded  "genre," to the outright hostile "low culture."

And yet, despite these many similarities, comics and sci-fi remain two (mostly) distinct art forms. While mutual respect certainly exists between the two sides, there is surprisingly little overlap between them. Perhaps science-fiction authors are not looking to have their work portrayed in comic form, worried that this sort of interpretation will cause their work to be seen as somehow less than "serious." Or maybe comic writers and artists are less interested in the constraints of literary narrative, which could restrict their medium's visual components.

Regardless of the reason, this nonsense needs to stop! As a lover of science fiction and comics, I demand more titles like the ones listed below. It's no coincidence that while film adaptations of classic sci-fi titles have a decidedly spotty track record, comic takes on many of the same books almost-universally kick ass.  So check out these amazing adaptations and be converted too. 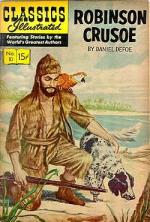 My love for the combination of Science Fiction and comic books has a definitive source: the stack of Classics Illustrated that sat on the bottom my parents' bookshelf. From my earliest days as a reader, i would pour through these comics again and again. Yes, the art is sometimes predictable, but the writers did great work condensing novel-length plots into comic book form.

Many of the best titles were from the Science-Fiction canon, including H.G. Wells' The Time Machine and The War Of The Worlds, and Jules Verne's Journey To The Center Of The Earth and Twenty Thousand Leagues Under The Sea. Additionally, there was other great proto sci-fi material like Mark Twain's A Connecticut Yankee In King Arthur's Court, Mary Shelly's Frankenstein, and Jonathan Swift's Gulliver's Travels. All of the Classics Illustrated books have been reprinted numerous times, so all you geek parents need to start indoctrinating your kids now. 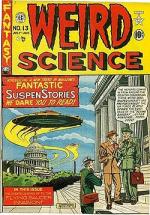 While not as big a part of my formative years, this title from Bill Gaines rightly revered EC Comics still stands as a highpoint of sci-fi/comic crossover some 60 years later. A bi-monthly anthology that ran for just 22 issues, Weird Science nevertheless established itself as the place for engaging and thrilling science fiction in the comics world. The books featured EC's signature mix of disturbing, outlandish visuals and smart writing that often carried surprisingly poignant morals.

While much of the material for Weird Science was written by Gaines himself, the series also adapted numerous short stories by notable authors. The most infamous of these being Ray Bradbury, who first accused EC of plagiarism before coming to an agreement that led to six of his stories appearing in the comic. Also included was work by Roald Dahl, Theodore Sturgeon, Anthony Boucher, and many others. 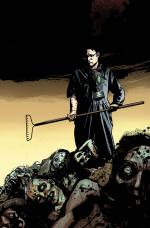 Another point where Science Fiction and comics meet is the ease with which they deploy a grand sense of scale. These two series are perfect examples, as both span numerous collections released over several years. I've seen the mini-series of The Stand and read the comics too - there's no question that in terms of creating the tone of the book and staying true to the plot that the comics win every time. And that's even with author Stephen King writing the teleplay for the series - it was just too big a story for the time and budget he was allotted.

The Dark Tower series has developed in the other direction, with a successful comic run preceding planned film/TV adaptations. Hopefully developments in CG graphics and the sheer scope of the budgets involved will lead to a more successful translation. But the comics tackle almost all of the vast and complex plot (8 books and counting!) without scrimping on visual style. 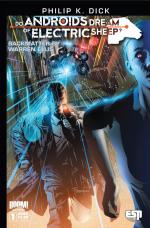 DO ANDROIDS DREAM OF ELECTRIC SHEEP?

On the other hand, comics are just as good at creating smaller, personal stories like this take on Philip K. Dick's classic title. Certainly this is one of the few sci-fi books discussed here that actually boasts a good film adaptation, but that shouldn't take away from the great job done by the Boom Studios team on this title. Comics are much better at dealing with their character's internal discussions, whereas most films that depend on voice over narration don't have the same success as Blade Runner.

Along with artist Tony Parker's amazing visuals, the series features every word of Dick's original novella, pushing it into the rarefied air of literal adaptation. And again, this is something that other visual media like TV or film would have a ton of problems attempting, let alone actually pulling off. It's a great book that succeeds at honoring its source material while presenting a new and interesting take on the same. A must for Dick fans. 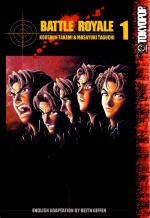 Given their growing place in the market, no conversation of modern comics would be complete without the inclusion of a manga title. When I first read Koushun Takami's 1999 novel, and then saw the mostly successful 2000 film adaptation, I remember thinking that the wild plot - involving a group of schoolchildren forced to fight to the death - was the sort of thing that could never work in America. Obviously Ms. Collins and her girl Katniss have proven me totally wrong.

Even so, Takami stands alone on this list as the only author who took the lead in adapting his or her work for comics. The result is a great title that both compliments and changes the original text in ways that someone else might not have felt comfortable doing. Certainly, Takami pays homage to the medium by amping up the violence and sex in his plot, but he also finds new and exciting ways to tell his story visually.

I know great comic adaptations of Science Fiction are few and far between, but what are your favorites? Let me know in the comments.