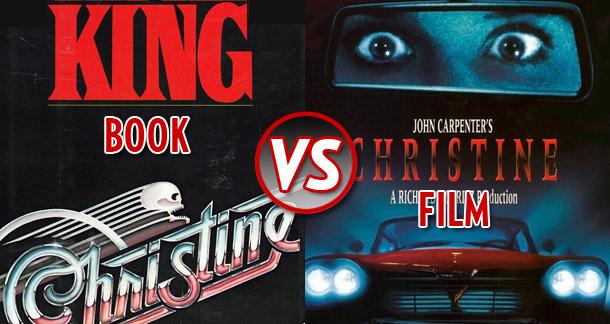 Books and movies are not the same thing. I know that. You know that. Everybody knows that. Yet, there’s still a perverse enjoyment in comparing the two. Especially when they’re both telling the same story. And, yes, especially when the story centers around a haunted car.

If you ever wanted to feel what it’s like to snort a Mount Everest pile of cocaine without risking jail-time and/or death, you can’t go wrong with reading Stephen King’s 1983 novel, Christine. The deeper you dive into this book’s narrative, the worse your nose begins to burn. Your pupils dilate. You start pacing around your house, ranting about black helicopters and brainstorming ill-conceived house appliance inventions, gripping the book’s spine so tight arthritis kicks in years early. At some point you set the book down and write out a seven-hundred word email to your dad that you’ll regret in the morning. Reading Christine is like watching an old YouTube clip of your favorite comedian bomb in front of a crowd of six unconscious barflies. It’s awkward and embarrassing and you kinda can’t look away.

Carpenter’s adaptation kicks King’s novel in the ass any day of the week.

Character motivations flip flop within the same sentences. Exposition sputters out on the page like a machine gun with unlimited ammo. A third of the way through the novel, its narrator is randomly injured in a football game and suddenly the text changes to third person, only to return to first person several hundred pages later. King has gone on the record claiming he doesn’t outline his books, and usually it’s not that noticeable. Emphasis on usually. In Christine the dude wrote himself into a wall, and rather than go back and figure out what the hell he was doing, he changed the goddamn POV. Stephen King was so high when he wrote Christine, his children constantly mistook his new white beard for a Christmas decoration. It's one of his longer novels, and there’s no reason for it. Detailed accounts of high school football games and bizarre illegal cigarette deals take up at least 200 pages that could have easily been cut. But who was going to suggest that? His editor? Listen. You try editing Stephen King and not only are you out of a job, but your favorite TV show is promptly cancelled and your entire family is murdered and buried in a ditch. That’s the kind of reach Stephen King has. Plus, again, this is Stephen King circa the 1980s we’re talking about here. The only cutting this man was doing involved a credit card against a small mirror. This is the author who insisted on every fucking chapter starting off with a song lyric, and when the publisher refused to allow this in the budget, King paid for the song rights out of his own pocket.

I guess you can’t mess with perfection, man.

John Carpenter claims Christine is the only film he’s done because he needed the job, while everything else has felt more like a personal project. Fresh off the theatrical failure of The Thing (easily his best film), Carpenter found himself in a desperate position and accepted the job of adapting Stephen King’s latest brick. He ended up hating the movie so much, he would later use a pseudonym for Prince of Darkness due to the shame of seeing his name on a Christine billboard. A little over the top? Maybe.

Carpenter’s film, released the same year as the novel, starred Keith Gordon, John Stockwell, Alexandra Paul, and the legend himself: Harry Dean Stanton. According to Carpenter:

I enjoyed working with the actors. But I spent a lot of time with that damned car. It was difficult to make it frightening. Duel had a truck, it was bigger and that was cool. Here was this really hip '50s car, really rock'n'roll - and it was just too cute.

It’s a shame to hear Carpenter talk about his film this way, but it isn’t totally unbelievable given what he had to work with. However, at the end of the day, it’s still a John Carpenter film, which means it at least looks and sounds absolutely stunning. The soundtrack is synth heaven and the lighting is enough to make a man’s heart stop in its tracks. Plus, Carpenter wisely cut a lot of the needless subplots that litter the novel. The story is still pretty ridiculous, but it’s no longer bogged down by a bunch of football and mafia bullshit.

Where the novel fails, the film succeeds. It’s a shame Carpenter hates it so much, because he actually managed to make something worth watching. When it comes to which is better, the novel or the film, it’s honestly no contest. Carpenter’s adaptation kicks King’s novel in the ass any day of the week.