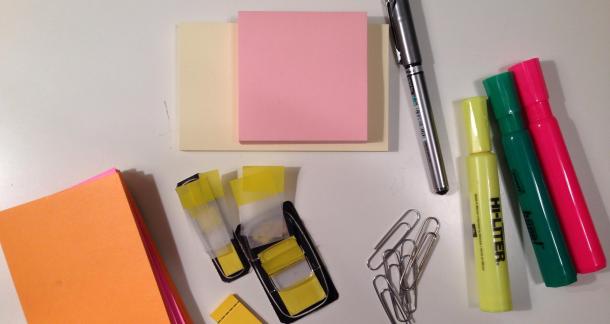 Maybe you’ve become bored with your manuscript, or maybe you’re still living under the delusion that writer’s block exists—either way, progress on your novel has come to a sad, discouraging halt. Some asshole construction worker stopped you in traffic and said, “Hey, buddy, not today.” He directed you to turn around and head back home where it’s nice and safe. But you don’t want to be safe. Safe doesn’t write novels. Safe writes flyers and birthday cards. Safe is for Hallmark. No, you want danger. You want to move forward, but you can’t. At least not down the road you’re used to traveling.

What you need is a new route.

I’ve started over two dozen novels in my brief career. Three of them have been finished. All but five or so have been completely abandoned. The three that I have finished were all written using the same style, which I’ve now adopted for all my current works-in-progress: writing out of sequence.

I lose focus easily. I write multiple books at once, I have ten novels I’m currently reading, and I can’t go ten minutes into a movie without resisting the urge to turn on something else, even if I’m already enjoying the first movie. I blame Netflix for that last one.

I used to try to write a novel and give up ten thousand words in, because I'd find myself growing bored with the project. Writing beginnings are my hardest obstacles to defeat. I‘m always too anxious to write The Special Scene.

In a manic state, I wrote one random scene after the next...I was a mad scientist collecting body parts from the local cemetery with the intent of stitching them together to create a masterpiece.

Which, of course, is almost never the first scene. So getting past the other scenes before The Special Scene is a chore for me. At least, until I discovered a cure. It hit me that nobody was forcing me to wait on writing The Special Scene except myself. I could always come back to the beginning later on, once I’d gotten that one scene out of my system. I pulled up a new document and began typing, and the writing hit me like a tornado consuming a trailer park. I couldn’t be stopped.

I had discovered a cheat code and accidentally enabled God Mode.

There will always come a time in the novel writing process when you hit a wall. You know what comes next, but it just doesn’t appeal to you. There are other chapters that sound more exciting you’d rather be working on. By writing out of sequence, you no longer have to force yourself to write the boring bits. You are always writing the fun chapters. The scenes that remind you why you’re a writer in the first place.

When I started my most recent novel, How to Successfully Kidnap Strangers, I kept getting giddy over the initial kidnapping scene, originally planned to occur five chapters into the story. I tried writing out the beginning, introducing and establishing my cast of characters, but I just wasn’t feeling it. None of it was as inspiring as the kidnapping scene, so I decided fuck the beginning and dived into the deep end, into The Special Scene. It wasn’t until much later that I realized I had done exactly the same thing for my previous two novels, Toxicity and The Mind is a Razorblade.

By skipping the beginning and immediately writing the scene that truly excited me, I had managed to kick fear and procrastination in their asses and skip the usual steps of intimidation that revolve around novel writing.

After I finished the inaugural kidnapping scene of the book, I was left wondering if I should go back to the beginning or simply start on the next random scene floating around my head. I figured if it worked with this first scene, why not continue?

In a manic state, I wrote one random scene after the next, knowing that despite their lack of linearity, I was building a novel. I was a mad scientist collecting body parts from the local cemetery with the intent of stitching them together to create a masterpiece. Nobody was going to look at this book without my permission, so who cared if it was a mess?

Sometimes chaos is just the ingredient an artist needs.

The first draft is complete once you’ve written enough scenes that could potentially fit together and form some kind of coherent story. I don’t necessarily outline when I write novels and I recommend you don’t either, especially if you plan on going the out-of-sequence route. At least not in the general sense. The first draft, that big mountain of random segments, actually serves as my outline. I take these scenes and I give them all a title, then write these titles on their own index cards. I clear space on my floor, on my walls, and I melt these cards together. The scenes are merely jigsaw pieces of a puzzle that has yet to be solved.

With How to Successfully Kidnap Strangers, I discovered something interesting. After I pieced together all the scenes I’d written, the first kidnapping chapter I wrote actually proved to be a better opener to my novel than the one I had originally planned. Would I have learned this by writing the chapters in order? Most likely not. Nonlinearity is beautiful in this aspect. It opens up your imagination and gets you to see your work at an angle hitherto absent from your perspective.

Alternative Methods of Scene Organization (In Case You Suffer from Some Kind of Strange Index Card Phobia):

It’s been my experience that the best method for crafting a first draft is to forget about linearity and just write the scenes that get your heart racing, your blood pumping. Writing out of sequence keeps you motivated and on your toes, never quite knowing what inspiration is going to hit you next. You want to make your deadlines? Then flip on shuffle and get weird.

Redd Tramp from Los Angeles, CA is reading Mongrels by SGJ; Sacred and Immoral: On the Writings of Chuck Palahniuk; The History of Sexuality by Michel Foucault March 13, 2015 - 1:30pm

Hell yeah. This makes so much sense. I always have that Special Scene in my head, and trip over my feet when trying to get through everything else. Never thought of telling the slog to just fuck off.

Hmm might be trying this. I'm the same. I have too many ideas for stories. Each time it's the same: I see that major scene and know what the main point of story is, but once I sit down to start, I start at the beginning and the big thing I want to write isn't till near the end. I have a hard time getting the narrative from one point to the next.

I think of Tolkien. I liked "scenes" in The Hobbit and LOTR, but the nature walk scenes bore me to tears. More rocks, more grass, more trees. Yet, they're required in order to get to the good stuff.

I suck at the nature walks. Doing this might help me find the trail better.

Thank you for the good advice. I've always found it more productive to write the juicy parts first and then ad the 'boring' parts as necessary. Also, I've found that if i do a good job on the juicy parts, there's less need for the boring parts.

Andrew Novak from Washington, DC is reading Our Dead World by Liliana Colanzi March 16, 2015 - 9:52am

This is great! Thanks, Max!

edsikov from New York by way of Natrona Hts PA is reading absolutely nothing March 17, 2015 - 9:27am

Yes! This works for nonfiction as well. I've written three biographies, and none of them have been written from beginning to end. If I didn't understand a certain chapter in the subject's life, I'd just move on to a chapter I understood, knowing I'd fill in the blanks later.

Ed, I actually wrote this very article out of sequence. It does indeed work well for non-fiction.

michael.overa from Seattle is reading Why We Read Fiction by Lisa Zunshine, Ishmael by Daniel Quinn, and There are Two Errors in The The Title of This Book. May 13, 2015 - 2:39pm

I particularly like all these methods! Anyone intereseted in this kind of concept might want to check out Narrative Design by Madison Smartt Bell. It's a great book and the whole second half of the book is dedicated to what Bell calls "Modular Design."