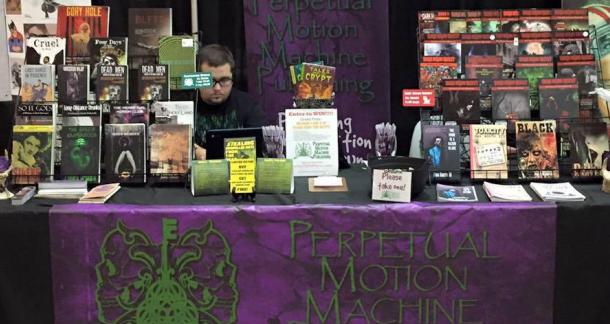 I work a table at about 3-5 conventions a year to promote my small press, Perpetual Motion Machine. Compared to other publishers, 3-5 is rather pathetic. I’m looking at you, Eric Beebe of Post Mortem Press, who averages about 25 cons a year. I get it. You’re not human.

Either way, I do leave my house once in a while, is what I’m trying to say. I enjoy being a book vendor at conventions, I really do. I can’t say I enjoy attending conventions as a customer, however. There’s just way too many people. It’s hot and sweaty and everybody smells. But behind my table, I am kind of safe. I mean, sure, a man dressed as Jason from Friday the 13th could hypothetically lean over the table and slice my jugular with an authentic machete he somehow snuck past security, but for the most part, I feel well protected.

Because I sell books, it’s understandable that my table is not always packed with customers, because let’s face it: books are terrible and nobody reads. So, this gives me some considerable downtime to people-watch and plot various revenge schemes. I also work on my ever-expanding Book Vendor Bucket List, which is exactly what it sounds like. Here is a sample from my current list of things I aspire to accomplish at future conventions.

Sell out of every single title on a Friday. (Assuming this is a Friday-Sunday scheduled event.) I’m not even sure what I would do for the rest of the con. Go home? Just sit at my now empty table, pretending like I’m somebody important? What if people approach me and ask what I’m selling? I guess I could get weird with it and just nod at the flat surface of my table and say, “You tell me, buddy.” Maybe I could reach out and pet an imaginary animal perched on the table. Tell it it’s a good boy and it’ll find a new home soon enough. But that will probably never happen, because nobody sells out on Fridays.

One thing I’ve noticed at conventions is that Batman is cheap as hell, which is ironic considering his real identity. Cough up some of that inheritance money, you cheap bastard.

Sell a book to a mime without either of us saying a word. Remember that robot fight scene in 2004’s EuroTrip? I imagine this scenario going down very similarly, minus the dope robot bleep-bloops.

Convince a custodian working at the convention center to momentarily abandon his job and join our table. He doesn’t have to buy a book or anything. He just needs to stand with me behind the table and join our staff. The only other requirement is he needs to have a cool mustache.

Sell a copy of Jay Wilburn’s Time Eaters to a Doctor Who cosplayer. I figure, hey, this person enjoys a television show about time travel, surely they will also enjoy a novel about the same subject. But they always seem to grimace and back away once I pitch Jay’s book as “time traveling cannibals.” Okay, so, I’m going to share a secret with all of you: cosplaying Doctor Whos are assholes. They normally don’t read books and they almost always act squeamish at the mention of the horror genre. They also hate it when I refer to them as “Doctor Whos.”

Sell a book to someone I’ve argued with online. I’ve run into other writers I’ve gotten into it with online, but I’ve never come close to selling them any of my books. Quite a few people who I’ve rejected from my press like to approach me and declare that I have, in fact, rejected them. Then they just stand and stare at me, awaiting a response. What am I supposed to say to that? “You’re welcome”?

Buy a book from a book vendor across from me, then proceed to sell the same book at my table for a higher price. If you can somehow pull off selling the book back to the original vendor, then there’s a good chance you might be a god.

Sell a book to a man in a gorilla suit. Or, alternatively, to a gorilla in a man suit.

Sell a book to a Batman. One thing I’ve noticed at conventions is that Batman is cheap as hell, which is ironic considering his real identity. Cough up some of that inheritance money, you cheap bastard.

Convince Danny Trejo to pose with one of our books. This dude seems to be at every convention except for the ones I attend. I’m coming for you, Trejo!

Sell a copy of Vincenzo Bilof’s Vampire Strippers from Saturn to a stripper. Bonus points if she’s from (around) Saturn, and also a vampire.

Talk one of the police officers working security into trading their gun for a book. I honestly don’t know why this one keeps failing. It seems like it would be super easy, right?

Hire a group of cosplayers to block traffic from continuing past the table. I would only allow the traffic to proceed once they’ve purchased a book from my table. Think of these cosplayers as the “bubblegum kids” from Hostel, only more violent.

Sell a book while eating a bowl of cereal. How impressed would you be if you saw me standing behind my table, a full bowl of Lucky Charms in my hands, milk drizzling down my chin, and successfully selling books to random strangers? You know what, that may actually work. I know I would totally buy a book from somebody eating cereal and not caring what anyone thought about it.

Sell a copy of David James Keaton’s Stealing Propeller Hats from the Dead to a kid wearing a propeller hat. I encountered one such kid a few weeks ago at Alamo City Comic Con, but I think perhaps he was thrown off his guard when I suddenly shouted, “Hey, kid! Hey, you with the propeller hat! Hey, come over here!” He, uh, did not stop at our table.

Insult someone who claims they “don’t read books” long enough to inspire a change in their lifestyle. One of the most annoying and frequent sentences I hear at conventions is: “I don’t read.” It’s depressing and it drives me insane, so I choose to believe if I berate them enough, suddenly they will want to appear “cool” and buy a book. Being a nonreader is about as cool as stepping in dogshit.

Track down someone who discourages their child from reading and confront them as they’re sleeping. Another very depressing encounter at conventions: a child or teenager will express interest in reading, but their parent will laugh and joke about how books are dumb, then drag the child away from our table. Just once, I would like to also abandon our table and follow this person throughout the convention, then continue following as they leave and drive back home. I would just sit outside their house as they sleep and think about all the ways I could possibly make this person reconsider their piss-poor parenting methods. This scenario most likely ends with a copy of Fahrenheit 451 being shoved down the person’s throat and me with handcuffs around my wrists.

Learn to understand that not everybody in the world is a reader. Sometimes, being so immersed in the small press scene, it’s difficult to rationally interact with someone who doesn’t care about books. That’s why it’s good to have a life outside of the lit world. The people at my night job don’t read and they couldn’t possibly understand why a human being would spend a chunk of their time sucked into a novel. It offers a lot of perspective. Normal people don’t read. It’s us crazies who enjoy the smell of dusty paperbacks. This is something I need to understand and accept, otherwise one of these days I am going to explode at a convention. Sometimes, people just go to cons to get Stan Lee’s autograph. Most of them have never even read a comic book. They just find his cameos in the Marvel movies amusing. And you know what? There’s nothing wrong with that. It’s their money. Fuck it.

Sell a book to Stan Lee. My anger still needs to be directed at someone. Stan Lee's dumb autograph has already stolen enough money that could have potentially been spent on my company’s books. Time to pay up, nerd!

Oh boy can I understand and relate to the non readers or the parents who actually DISCOURAGE their kids from reading! I have come back with, "Reading helps stave off alzheimers, start now before it's too late!" if they keep walking, obviously, it's too late. I could borrow a few of your bucket list aspirations and use them on my own. Love this!