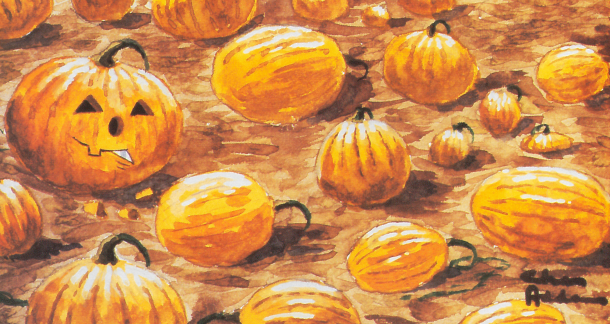 When we mention masters of horror: the King's, the Matheson's, Tobe Hooper, George Romero, Wes Craven—

When we talk about The Mount Rushmore of horror heroes, we tend to skip one who brought the morbid and the macabre to so many.

Below we've got 13 of his creepiest, spookiest comics, plus some biographical info and stories. Get out your garlic, your crucifix, whatever you use to ward off evil, and let's take a look. Oh, and in the words of Gomez Addams (to a babysitter): "...keep your back to the wall at all times." 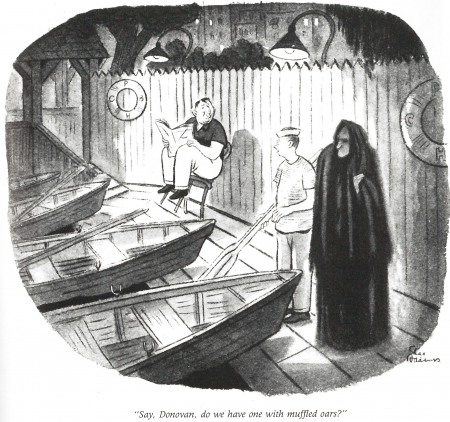 The strange and unusual had a tendency to show up out of nowhere in Addams' work. Yes, it's creepy that this dude is looking for a silent rowboat. And when you look at the illustration, you can see the lights are on. It's nighttime, and this dude is just going out for a nice, quiet row?

But perhaps the creepiest thing is that this figure, this specter, is drawn differently than the other men. He's got a blurred, foggy effect going on. He's clearly not of this world. He's invading the world of the comic, our world. Addams had a way of making these different worlds intersect. No, that's not quite right. They didn't intersect. The world of Addams snaked its way into ours. 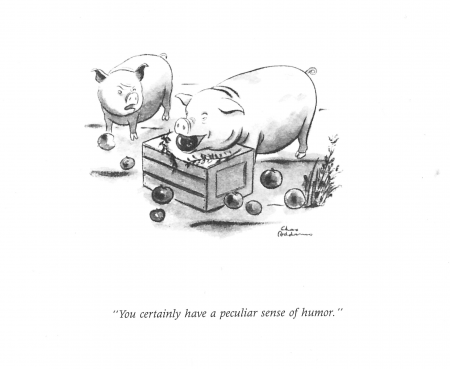 Addams did most of his well-known work cartooning for The New Yorker. During his stint, a new editor, William Shawn, came on board. Although Shawn was well-liked (especially by writers—Franny and Zooey is even dedicated to him), he didn't care for jokes about death. Luckily for us, Robert Gottlieb, the editor who followed Shawn, felt death was never funnier than it was in Addams' work. 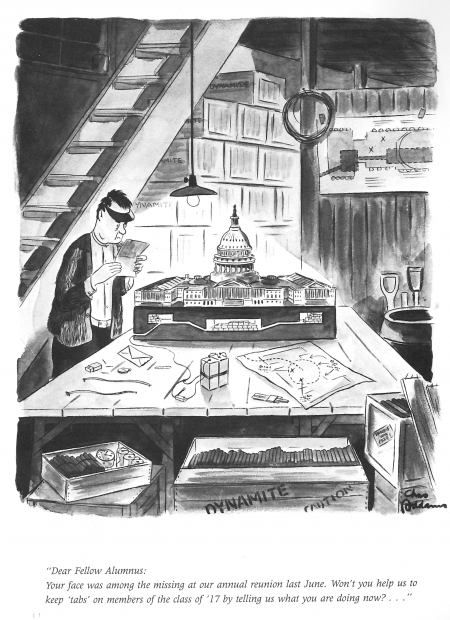 We've got a very average man. Suburban basement, receiving alumni letters. The way he's dressed is completely normcore. Oh, and he's got a huge store of dynamite and plans to blow up government buildings.

In Addams' work the horror isn't always in some far-off castle. It's next door. Or downstairs. It's not something readers have to seek out. It finds you. 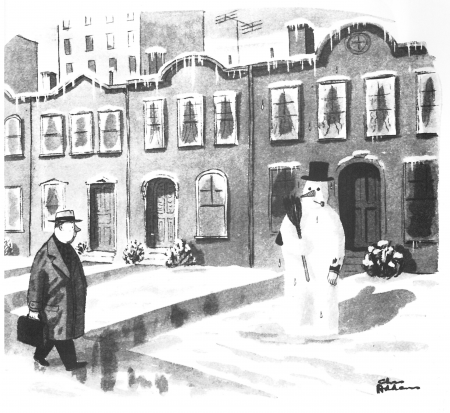 There's the horror here, which is obvious, and then there's the mastery, which is more subtle:

...if you look closely at the details and backgrounds in Addams' work, you will see what a punctilious draftsman he was...He was in love with the sheer thingness of things, and [Addams' wife] Tee Addams remembers some hours he once spent in an aquarium studying the differences between saltwater and freshwater fish, for a drawing in which it didn't really matter.

The icicles. The windows, all drawn with framing. The detail on the doors. The bushes and the way the snow sits on top of them. The mixture of grays that shows you, so simply, that the sidewalk is slippery.

Addams wasn't just a guy with a dark imagination. The dude was a true artist. They say the devil is in the details, and Addams made good use of that devil. 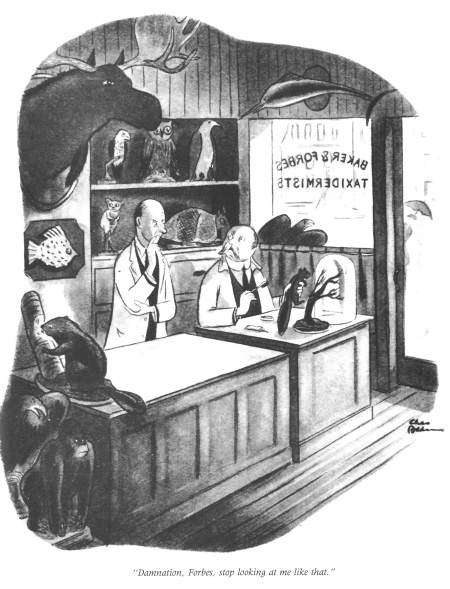 This one's a personal favorite. The subject matter is pretty good, the drawings are competent and all. But it's all about that dude's face. 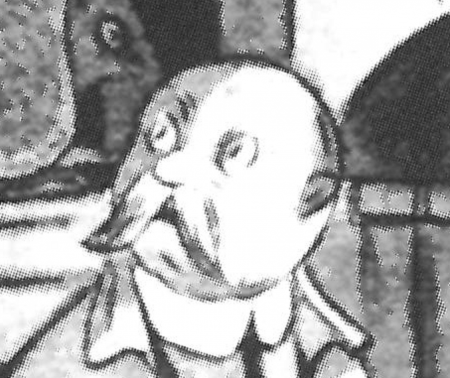 This is not a man who is joking, not a man who has vaguely considered taxidermying a human. This is a man transfixed, obsessed with the idea. This is a true weirdo, and he's the absolute best. You just know this guy is going to kill his co-worker before long. If this was a movie, we'd already be done shouting "Get out of there! Run away!" At this point, we'd feel like the co-worker deserved it. I mean, c'mon. This dude telegraphed his bizarre plans so clearly. 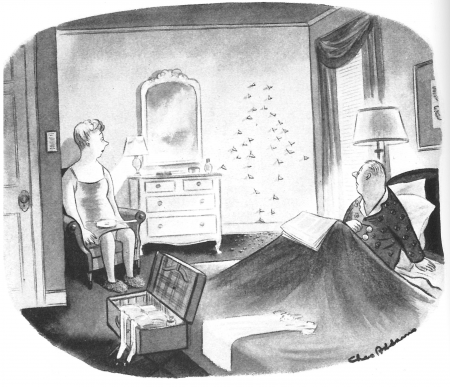 Whether we know it or not, there's always something messed-up going on nearby. Addams was great at showing the spots where the unusual barely poked through from the other side (literally, in this case). His art made a person wonder what was going on in that old house, beneath that sewer lid, in the hotel room next door. No place was safe. 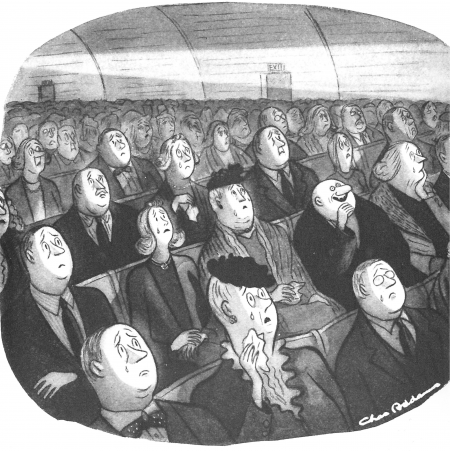 Biographers have said that Addams felt his best stuff was the stuff he didn’t have to caption. In this piece, you have to "read" it a bit to figure out what's going on, where the joke is. And by the time you see Fester, you've seen that the other people in the theater are deeply saddened. They’re weeping openly. Something truly tragic is going on here. And then we have Fester, laughing his ass off. The more you look at the other faces, the darker and funnier this one gets.

It's common for folks working in horror to use the genre to turn the mirror on society, to say, "See, YOU are the weirdos!" A lot of writers and creators do that really effectively with horror, but Addams remains one of the few horror masters who could flip back and forth, sometimes showing us our own reflections, sometimes showing us something that was just plain wrong. 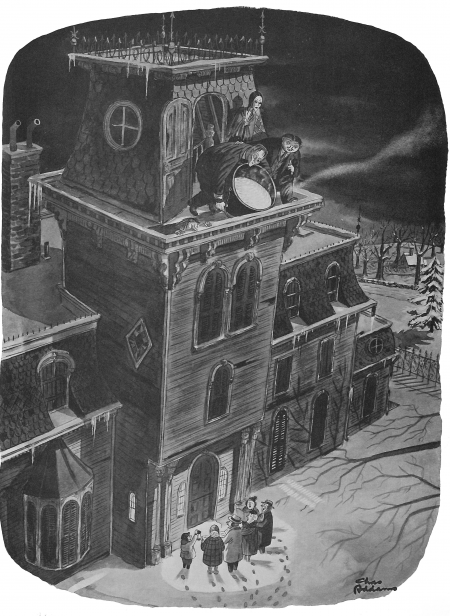 If you want to talk about the limits of good taste, here you go. We have the Addams family on the roof, prepping to pour boiling oil on a group of carolers.

It's like...you know how we all hate telemarketers? And people knocking on the door to sell us something? I'd be lying if I said I'd never imagined them being brutalized in some way. But seeing it here in black and white takes it to another level. It's like something from the dark part of my brain that I'd never admit, and yet here it is in front of me. And it's so much worse when it's made into a reality. 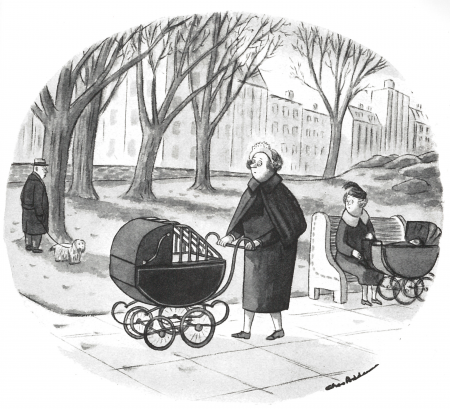 Addams was not afraid to showcase the awful, evil potential of children. While he loved kids by all accounts, his work wasn't afraid to depict them as little devils. Nothing was off limits. 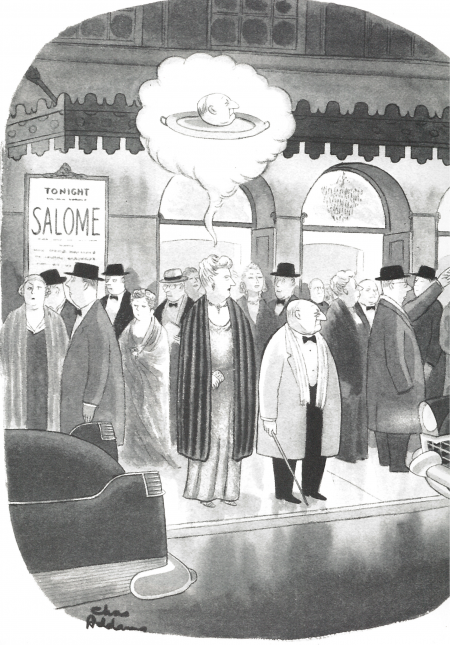 While we're talking about taboo and transgression, husbands and wives fantasizing about killing each other was a regular feature of Addams' work. It went both ways, husbands killing wives, wives killing husbands. What sets Addams' murderous couples apart from your run-of-the-mill maniacs is that the murderous intent is not just about getting rid of the person. Our murderers are going about it in gruesome fashion. Take this couple. This woman is imagining not only a dead man, but his head is on a serving platter. Implying that someone is going to eat it. 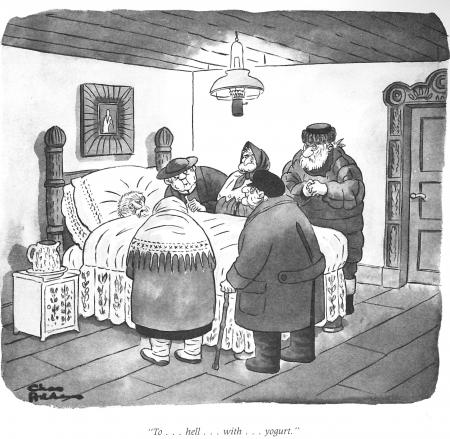 Okay, okay. This one isn't scary. I just agree with it on such a deep level that I felt the need to include it. For the record, "To hell with yogurt" is an acceptable epitaph for use on any materials memorializing me after I pass.

This one isn't one of Addams' per se. It's a bonus. But I wanted to include this Google Doodle because it shows something Addams did, something crucial, which was bringing horror to the mainstream. Without Addams, there would be no Addams Family. Probably no Munsters. It was Addams' work, not only with the family but with all of his characters, that helped make the horrific mainstream.

For fuck's sake, how many Google Doodles feature a child in a guillotine?!

I don't think we can overstate the ways in which Addams' work permeated culture, especially during the monster craze of the 60's and 70's. Hell, his materials were referenced directly in creating Disney's Haunted Mansion. Here's an Addams piece: 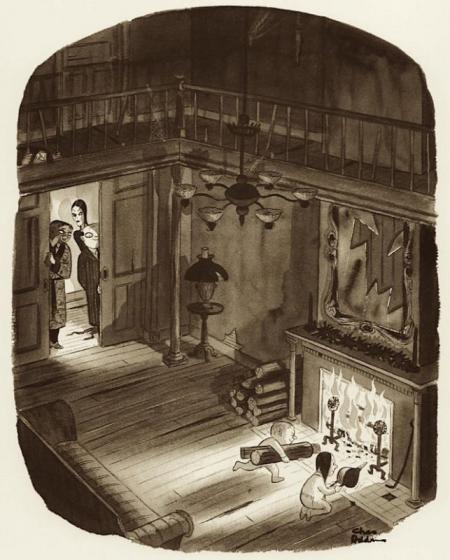 And here is one of many Haunted Mansion planning sketches by Ken Anderson: 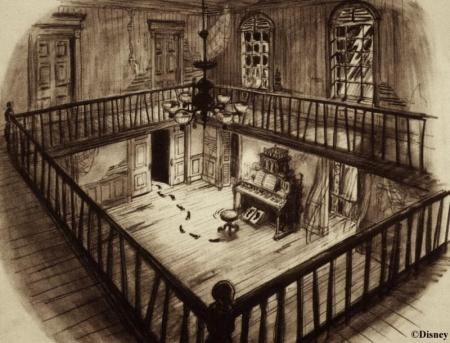 If you're not seeing it, look at the chandeliers. 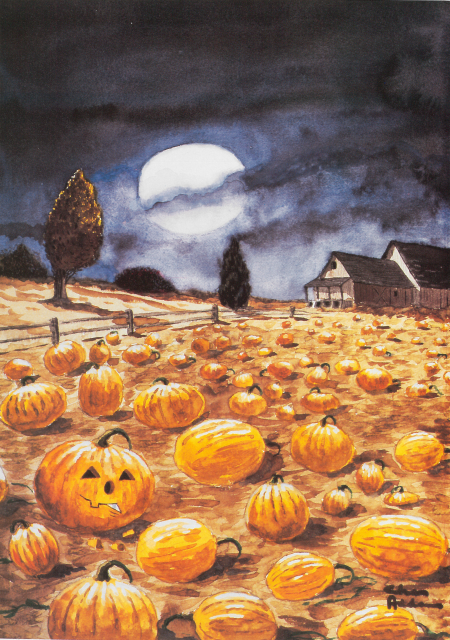 Charles Addams. A true artist, a true craftsman. And a true master of horror.

Who's your favorite unsung master of horror? Addams is one of mine, but there are a lot of others out there.