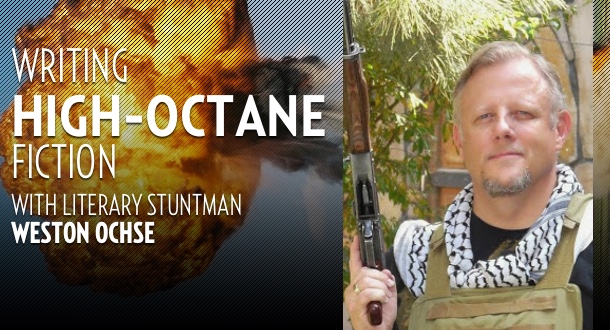 Many writers are skilled in characterization and scene setting. They can weave an in-depth mystery the likes that would make Ellery Queen jealous. Their dialogue rings with the repartee of Quentin Tarantino’s greatest characters.

But when it comes to portraying action, they stutter, and pause, and ultimately lock up until eventually their characters are looking up at them and jostling, “Come on, let’s go.”

This happens far too often. Great writers find themselves hogtied and unable to move their plot forward, all because they don’t know how… or don’t trust themselves enough to figure out a way through the narrative. The idea of combining dialogue, characterization, scene setting, plot development, and action seems far too difficult.

That’s because there’s an art to action fiction.

Not everyone can pull it off—falling victim to repetitiveness, unbelievability, and boredom. In High-Octane Fiction, Weston Ochse will teach you how to combine it all, setting the reader on the razor’s edge of anticipation, while creating believable action.

Why is Weston the man for the job? Because he's a former intelligence officer and special operations soldier who has engaged enemy combatants, terrorists, border crossers, narco-bad guys, and human smuggling punks. And he's the author of acclaimed novels like Grunt Life and Seal Team 666.

Weston doesn't just talk about this stuff. He's lived it. And he'll give you valuable, unique insight into his process. The class will include lectures, writing assignments to be critiqued both by the instructor and your peers, and opportunities for Q and A along the way.

Week One: Call to Action

Lecture: If we think of action as a weapon, then we definitely need some ammunition. We need action words. How many ways can you say run? How many ways are there to describe a fight, to fall, to jump or even just to walk? Before we can even begin, together as a class we’ll adopt a master list of action words that will be the ammunition for the attack on your narrative.

Assignments: Watch the three action videos of the instructor’s choosing and provide ten action words from each movie. Read the fight scene between Achilles and Hector and write a minimum 500-word response, detailing what the scene taught you about writing and conveying action. Participate in discussions.

Lecture: You can wing it if you want to, but there’s a systemic approach to creating a coherent scene. Here we will learn the elements and then be able to apply them.

Lecture: Ever seen a Michael Bay movie and got sick to your stomach, or at the very least dizzy? Ever had to take off your 3D glasses because the input was too much? Ever put a book down because there was so much action you lost track of the plot? This happens when people value action over story. Pacing is essential to a successful high-action narrative and here we will learn the four elements of pacing high-octane fiction.

Assignment: Read assigned materials, then, using the master list of action words, create a 500-word action scene that has enough downtime to accentuate the action.

Lecture: Show-don’t-tell can be extremely difficult when writing action scenes. Action doesn’t always mean a life or death struggle. Action can be responding to the news a family member has been hit by a car or a visit from someone you don’t want to see. Action can be psychological or it can be conveyed in what people say.

Assignment: Read assigned materials, then, using the master list of action words, create a 750-word action scene where we don’t know the identity of the fighters or the reason they are fighting, then reveal it through action without ever telling us. Participate in discussions.

Weston Ochse holds a Master of Fine Arts in Creative Writing, and is a former intelligence officer and special operations soldier who has engaged enemy combatants, terrorists, border crossers, narco-bad guys, and human smuggling punks. His personal war stories include...

''Weston Ochse has always been a wised-up, clued-in, completely trustworthy writer of high-action fiction that deserved a wider audience, and SEAL Team 666 is his breakthrough book. Here, every story line is as taut as a gunfighter's nerves, and individual scenes pop like firecrackers. I raced through this novel, and when it ended, I wanted more.'' —Peter Straub, New York Times bestselling author

''A wild blend of nail-biting thriller action and out-of-the-shadows horror. This is the supernatural thriller at its most dynamic. Perfect!'' —Jonathan Maberry, New York Times bestselling author

''Even the supernatural has its own division of terrorist. Thank goodness we have our defenders—SEAL Team 666.'' —Joe R. Lansdale, British Fantasy, Bram Stoker, and Edgar award winning author

"Weston Ochse writes hard-nosed fiction with more grit and imagination than most authors could ever hope to muster. When he turns his skills to tales of the military, the words sing with the truth of personal experience." —Christopher Golden, New York Times bestselling author of Snowblind