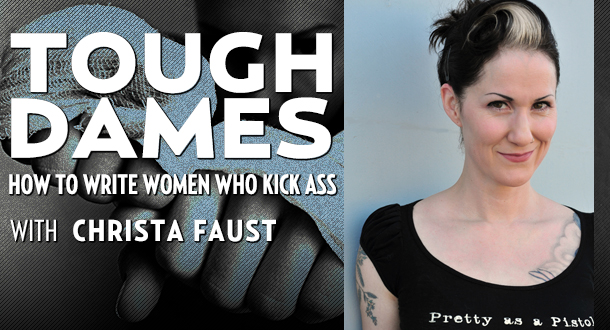 Christa Faust is one of crime fiction's most badass writers. And she'll teach you how to write women who kick as much ass as she does, using the rules of hardboiled and noir fiction.

Christa Faust knows tough women. She's been writing them for years, in her Angel Dare series, and in her latest book, Butch Fatale, Dyke Dick. And she's here to teach you the distinction between writing women, and writing women who kick ass.

Christa taught this class for us last year and we're excited to bring it back. She's a master of the crime genre, and the class is a great opportunity, whether you want to write tougher women, or learn the tricks of the trade behind hardboiled and noir fiction.

Here's a brief excerpt from Christa's week-one lecture, Beyond the Femme Fatale:

... Far too often in hardboiled and noir fiction, female characters exist solely as motivation for the men around them. In the classics (and some modern books as well) female characters tend to fall into one of these categories:

In an effort to make a female character strong, many authors make the mistake of creating what is essentially a man with boobs.

These days, you have a lot of lip service being paid to the concept of “strong female characters.” But all strong female characters are not created equal. Anyone from Ree Dolly in Woodrell’s Winter's Bone to Angelina Jolie as Lara Croft can fall under that broad umbrella, and you don’t need me to tell you that they are far from equal.

In an effort to make a female character strong, many authors make the mistake of creating what is essentially a man with boobs. A tough-talking, hard-drinking, two-fisted badass who just happens to be female. Then, of course, she turns into a helpless kitten as soon as a real man shows up. I call bullshit on that action.

My point is this: Strength doesn’t have to be physical. Look at the character of Masako in Natsuo Kirino’s Out. There you have a middle-aged suburban wife and mother who works the night shift in a box-lunch factory. She is not beautiful. She does not know martial arts and has never handled a gun. But she is hands down one of the strongest female characters I’ve ever read. She is stone cold and single-minded. When action needs to be taken, she takes it without hesitation. And therein, grasshoppers, lies the key...

Week 1: Beyond the Femme Fatale

Learn Mistress Christa’s Ten Rules to Write Noir, and find the distinction between a strong female character and a stereotype.

Week 2: Dialog and the Female Voice

The key to strong, gritty dialog—male or female—is realism. Learn to write characters who talk tough, and realistically.

How flawed, awkward, ugly sex can reveal character. WARNING: This week’s lecture contains what the MPAA likes to refer to as frank sex talk.

* This class includes Q&A opportunities with the instructor, as well as writing assignments meant to demonstrate your knowledge of the material. They'll be critiqued by both your teacher, and your fellow students.

Christa Faust grew up in New York City, in the Bronx and Hell’s Kitchen. She’s been making stuff up her whole life, and spent most of her teen years on endless subway rides, cutting school and scribbling stories. After High School finally had enough of her, she...

"An estrogen sucker punch to the back of the head. Christa Faust helped me find an approach to creating living, breathing, feeling and occasionally ass-kicking female characters." —Terry R.

"Tough Dames" -- taught by tough dame Christa Faust -- rocked my world and made me think (and write) from a completely new perspective!" —A.K. A.

"While on the surface this may appear to be a niche course, Christa Faust challenged me with no-holds-barred universal lessons from her own hard-earned experiences. Her feedback was dead-on-the-money and forced me to change my perspective on my writing, regardless of the genre. A true privilege." —Josh J.

"She’ll get you turning pages faster than a wrestler on ‘roids." —Bizarre Magazine

"The First Lady [of Hard Case Crime] is certainly earning her stars and stripes in the crime fiction world." —We Love This Book