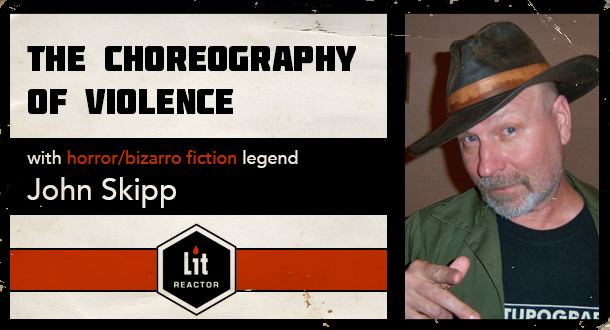 In action, every moment counts.

Many writers are skilled at creating a mood, building character and place, finding stories that move them. But when it comes to the moment of truth—that big payoff they've spent the whole scene building up to—they blow it. Unable to deliver the goods.

It's always disappointing. And unnecessary!

There's an art to vivid, physical, in-the-moment writing. Tricks to believably grounding your action, revealing character in motion. Strategies for crafting propulsive prose that hits with great velocity and impact.

And he knows a thing or two about writing kick-ass action scenes.

His class, The Choreography of Violence, is designed for all skill levels, and across all genres, from historical drama to futuristic science fiction, westerns and war stories to paranormal romance, fantasy and horror to naturalistic crime thrillers, serious highbrow lit to far-flung bizarro weirdness.

The goal is simple: Write action that hits the reader as hard as it hits the characters.

This two-week workshop will include written lectures, opportunities for discussion and questions with Skipp, and writing assignments designed to put your new skills to the test!

Week One - The Choreography of Violence

The focus here is on the fundamentals: How to write a clear, convincing action scene that advances character and plot. What to leave in. What to leave out, and why...

Week Two - Kill Kill Kill! Die Die Die! When Will It All End?

This lecture concerns the ultimate punch line: Death. How to make a life-and-death struggle count, and deliver emotion without losing your story's momentum...

John Skipp discusses the sale of The Light at the End, written with Craig Spector and released in 1986. It sold a million copies and hit the New York Times bestseller list, allowing Skipp to quit his day job as a street messenger in New York City.

"I loved every second of John's Choreography of Violence class... To cap things off, my second week assignment, in which I had to write a death scene, became a 2,000-word short story that has just been accepted for publication in the Anthology of Bizarro by HellBound Books. So, I guess you could say Skipp's course was a resonding success - even before it had finished! :D" —Sulkylizard

"I’m not an ‘action writer’ by genre, but I feel any writer who takes their craft seriously needs to learn to write action scenes that don’t die on the page. John Skipp was the ideal teacher on The Choreography of Violence course, a perfect combination of razor sharp critical vision and kindness." —Ayten

"I can't say enough about the value of this course and how John Skipp's expertise and compassion will take your writing to the next level." —Elisabeth C.

"Before this class, I just skipped over the violent bits in books. The time came when I had to write them. With John’s class, those scenes were clear, convincing, and true to the character." —Lynda R.

"Skipp's workshop helped me write and polish two difficult fight scenes for my novel. It's incredible the amount of feedback John offers. I was well inspired to take his class." —Gio C.

"John Skipp’s The Choreography of Violence is simply outstanding, exploring one of the most important and difficult aspects of fiction writing—the action scene—with an emphasis on logic, clarity and stakes escalation. Skipp’s especially great at helping you tune your voice and execution to something that reads dynamically on the page. This lesson has not only changed my approach to action, it’s changed my approach to narrative itself." —Michael Kazepis, BizarroCon 2012 workshop graduate, editor of King Shot Press, author of Long Lost Dog of It

"John Skipp's Choreography of Violence class was an action-packed, no holds barred thunderdome for my words. I brought in a fight scene, and his guidance made it sharper, kicked it up to a breakneck pace and helped trim the fat. It's now a central chapter in my next book. Get ready to rumble, wordsmiths." —Michael Allen Rose, author of Party Wolves in My Skull

"John Skipp’s “Lean Mean Writin’ Machine” is just that. His class was a blast! Not only did I learn from Skipp, but also feedback of fellow classmates. I eagerly anticipate my next LitReactor course." —Leah B.

"I don’t believe it’s hyperbolic to say that John Skipp’s Lean, Mean Writin’ Machine changed my life. His enthusiasm, intelligence, and earnest approach to the craft helped me out of a creative slump, and ultimately lead me to a career as a writer." —Brendan Vidito, author of the Wonderland Award-winning Nightmares in Ecstasy

"Skipp sees what your work could be, sees what he can bring out of you, and then he makes you believe in yourself! John Skipp is PRICELESS!" —Julie M.

"I honestly could not have asked for a better mentor. He was engaged fully with each student, his critiques were honest, and his praise phenomenal. His personalized approach is the best thing about his teaching style. John Skipp is gold and should teach ALL the classes!" —Courtney A.

"Lean Mean Writin' Machine with John Skipp was just what the Dr. ordered. Skipp tailored the assignments to fit my essay style in a class of fiction writers. His notes and critiques were specific and super productive. He genuinely wants to help his students reach their goals. And this helped motivate me." —Andrew K.