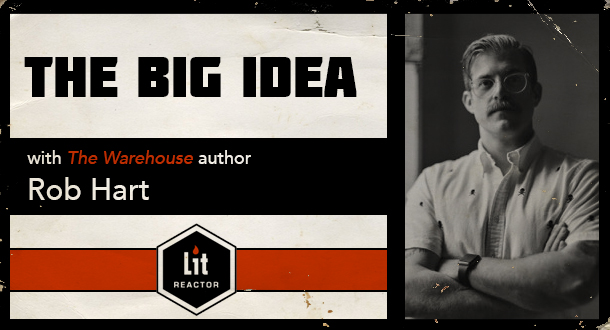 Your Instructor: Rob Hart (author of "The Warehouse")

Books with exciting hooks sell for a reason: people like to read them! And they tend to translate well for foreign markets and film/TV sales. But a big idea by itself isn’t going to do the job. You need to root that idea in character. And you need to build the foundation of your story on solid ground, so that the reader can be fully immersed into the world.

The focus of this four-week workshop is to build that foundation—by rooting the story in strong characters, then building out a roadmap (research materials and an outline), before diving into the opening, which serves the purpose of introducing your readers to the world without overwhelming them, or making them feel like it’s a lecture.

Rob Hart is the author of The Warehouse, which imagines a world where one company dominates the online retail economy and puts its workers into dormitory housing, so they can better fulfill the needs of consumers. It sold in a pre-empt to Crown at Penguin Random House. It also sold in more than 20 languages, and the film rights were optioned by Ron Howard and Imagine Entertainment.

This class is open to all skill levels, and includes written lectures and homework assignments, to be critiqued by both Rob and the class. You can come in with a work in progress, or completely cold. Either way, Rob will help you lay down the building blocks for a killer story.

WEEK 1 - Whose Idea Is This Anyway?

Ideas are good. Characters are better. You need to root your ideas in strong characters that’ll help you navigate the story. The assignment this week will be to come up with an elevator pitch, and a rough sketch of the character (or characters) the story will be told through.

WEEK 2 - Finding And Ordering Your Ideas

Craig Clevenger, author of The Contortionist’s Handbook, once said you don’t always have to be accurate, but you do have to be believable. No matter how far flung your idea, you have to underpin it with real, solid research. This week you’ll learn how to find research material—hard info, soft info, thematic inspiration, comp titles, and primary resources. And you’ll develop your own research list, tailored for your project.

If you want to write a ripping thriller, outlining is key. There are a million ways to do it—or not do it—and Rob will go over different formats and ideas, as well as bring in advice from other writers who don’t usually use outlines, to see what kind of wisdom they have to offer. The goal will be to find the process that works for you, and start getting your ideas in the order that works.

It’s time to get started, and big idea books come with a unique challenge—you have to get your theme and your characters across, and immerse your reader into the world, without making them feel bogged down or lectured to. But there are tricks to it, which Rob will reveal this week—as well as a grab-bag of other nuts-and-bolts advice that Rob has found useful. By the end of the week you’ll have written five to ten pages of your intro.