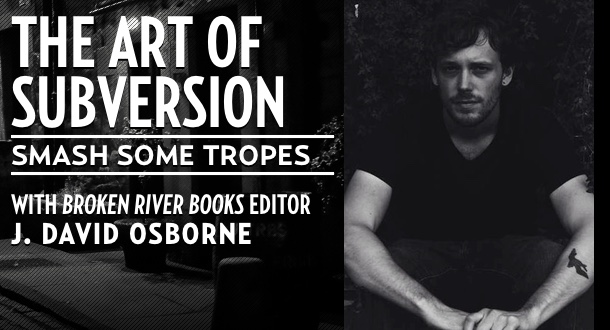 In this two-week workshop, learn to kill those those bad habits that come with using tropes in fiction, and create a living, breathing world that surprises your reader and makes you stand out.

In a publishing world where it seems like there are five hundreds books being released every day, how do you stand out?

Lose the bad habits and laziness that come with using tropes in fiction, and create a living, breathing world that surprises your reader and makes you stand out amongst an army of your peers.

J. David Osborne is an acclaimed author and the editor of Broken River Books, which has published authors like Stephen Graham Jones, Adam Cesare, William Boyle, Michael Kazepis, and David James Keaton. And he has some ideas about the art of subversion.

For example, instead of a dark noir taking place on the mean streets of the inner city, what if it was set in a church camp? Instead of a gunslinger walking into a saloon and getting into it with the scariest killer in the west, what if he becomes involved in a game of strip poker?

Sounds simple, but the end game is leaving a lasting impression on the reader. Over the course of two weeks, Osborne will take a short story you've written, break it down into its basic components, analyze how the tropes have worked, and teach his personal methods for subverting expectations.

The class will include a critique of your work, peer reviews, and opportunities for Q&A with the head of a rising publisher of crime fiction. And by the end of it, you'll have a story that makes good on the promise it started with.

Though there are publishers out there that are looking for strict genre work, I think it's important for authors to take risks and play within the material, because whether or not they succeed, it will force them to dig deeper into the work, and it'll almost always turn out for the better.

Osborne will discuss the types of submissions he receives to Broken River on a weekly basis, and will outline what makes certain books stand out from the others. In particular, he'll be looking to show how following tropes within a genre does not equal familiarity with the material, but rather inversely, it shows discomfort, a lack of willingness to stretch the parameters of what can be done within that particular wheelhouse.

Assignment: Submit a short story that you've already finished, or are in the process of finishing, and Osborne will critique it based on its confidence and its ability to genre-bend.

Osborne will outline the books and films and short stories that do precisely what he's talking about: take a cliche and flip it on its head. He'll also return your stories and be available for questions. Stories will also be reviewed and discussed among students.

J. David Osborne is the publisher-in-chief of Broken River Books, an indie crime fiction press dedicated to bringing you weird, transgressive pulp novels the likes of which you won't find anywhere else. He's also the author of the Wonderland-Award-winning novel By...

"There are editors out there who also happen to be great writers themselves. Or groundbreaking publishers. J. David Osborne is all three—the author of (among other acclaimed works), By the Time We Leave Here, We'll Be Friends, which is magnificent; head honcho at Broken River Books, which has published Stephen Graham Jones, Adam Cesare, William Boyle, Michael Kazepis among others—if you have a manuscript that needs editing, take it to him. Everything from plot holes to hyphens. And where most good editors know how to make you dig deep into the dark, David gives you half a box of matches and throws you in. Then, when you stumble into the light, he's there to tell you he told you so." —JS Breukelaar, LitReactor instructor and author of American Monster

"Broken River Books is a home for fiction that’s gritty, weird, and dark, but also extremely polished as well as ambitious, in a non-postmodern, non-pretentious way. I can’t think of another press that built such an impressive catalog over its first twelve months. A publisher’s faith in a book is one of the most essential ingredients to that book’s success, and Osborne has been one of the biggest believers in Salmon from the beginning. With the creative input I could get with Broken River, I felt the book stood a greater shot at long-term success than if it came out with any other publisher, big or small." —Cameron Pierce, editor of Lazy Fascist Press and author of Our Love Will Go the Way of the Salmon

"J. David Osborne is a great editor, all joking aside. He found at least one typo per page, as well as a sheet of fun “Plot Inconsistencies” he made for me. On the last round of edits I wrote him into the novel mostly to rub a balloon against his head. And I wrote one of the characters from his own novel into my novel just to screw up that character’s arc. One is easier to find than the other, which is probably why he hasn’t said anything yet. See that? These are the kinds of things you can probably only do at an indie press. Indie for life!" —David James Keaton, author of The Last Projector and Fish Bites Cop