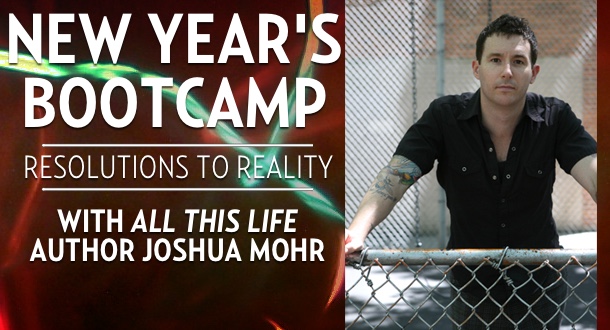 Talent is important, but work ethic is better. Start the new year off right, with prompts, weekly page targets, and craft lectures, all aimed at getting you in the habit of producing new work.

Your Instructor: Joshua Mohr, author of ALL THIS LIFE

Talent is important... but work ethic is more valuable.

This will be a crash course in honing that literary muscle-memory: sitting down daily to write.

In this four-week workshop, acclaimed author Joshua Mohr will help you meet your literary goals, with prompts, weekly page targets, and craft lectures. You will write at least one page per day. You'll motivate one another by reading and commenting on your submissions to the community. Concurrently, students will also write an original short story, started and completed during the course's duration.

By the end, you'll have have started the new year off by making your art a recognized component of your day-to-day life.

Let's kick off 2016 by upping your attention on your art!

During the opening week, you'll hit the ground running. Day 1 will start with a prompt and a written and video lecture on a craft element. That will be our portal into the course.

You'll still be responsible for completing the daily writing prompts, but now students will begin constructing a new short story. The weekly topic will be plot and conflict, making sure the stories have enough action, danger, and drama to lure a total stranger into the narrative.

Students will be juggling the daily writing prompts, as well as continued work on their short stories, but since this course is a bootcamp, you'll be asked to juggle one more ball as well. Week 3 will introduce the concept of a Dialogue Journal. Great dialogue requires diction and syntax unique to every player, and students will begin the fun and necessary process of discovery for every character's idiosyncratic language.

As students sprint to the finish line, everyone will post their completed short stories. This week will have a workshop, people reading and commenting on the class-produced short stories of their colleagues. The daily writing prompts will continue until the last day of the course.  By the end of our time together, students will have written at least 50 pages during January.

Joshua Mohr is the author of five novels, including Damascus, which The New York Times called “Beat-poet cool.” He’s also written Fight Song and Some Things that Meant the World to Me, one of O Magazine’s Top 10...

"Joshua Mohr's Plotlines class was invaluable to me. I took it because I'd been trying to write a novel but felt stuck and thought that writing to deadlines (imposed by someone other than me) and getting feedback on my work from other writers would help kick-start me. It did. But more importantly, Josh's "have fun on the page" mentality helped me remember why I became a writer in the first place: because I enjoy it. Somewhere along the line, I'd started to see it as an intimidating chore, but the supportive environment of this class--along with the exceptionally useful lectures on plotting, characterization, and dialogue-- reminded me to put the joy back into writing. I learned a great deal from the lectures and would absolutely recommend the Plotlines course to any writer." —Kimberly T.

"As a writer I felt like I underwent a metamorphosis during this last month. Josh was generous and giving with his knowledge, the wisdom of experience flowed through everything he said and every bit of feedback he gave. I wish I did this course years ago, it would have saved me a lot of flailing about, having spent years nurturing the desire to write, but not really knowing where to start or how to get traction." —C. Freeman

"I love the culture at LitReactor. It's a great opportunity to meet other writers that share the same joy and challenges, as well as learning from those of much greater experience." —Jimbo

Praise for All This Life:

"As Mohr’s memorable characters converge, All This Life raises profound questions about the growing influence online reality has on our lives."  —BBC.com

"The book takes itself seriously, ably balancing its many story lines while it builds to a breathless climax. The characters’ strong emotions provide a current of barely contained anguish that threatens to overtake their lives as it pushes them forward... Mohr delivers a solid look at the distinction between our offline and online lives and the danger that lurks when the lines between them are blurred. Thoughtful crossover fiction of interest to adult and YA audiences." —Booklist

"Mohr’s narrative is by turns heartrending and humorous, with never a dull moment. Readers will love this cast of characters." —Publishers Weekly, boxed review

"Mohr's portrayal of a rapidly gentrifying San Francisco rings true....Mohr's novel builds slowly, and his empathy for the majority of his characters shines through, allowing for a genuinely felt conclusion." —Kirkus

"Mr. Mohr has found a way to articulate our disconnectedness for all of us. Highly recommended." —Sensitive Skin

"Mohr’s got an inherent ability to spin a yarn; it’s as if he’s standing over your shoulder lighting each page with a match as you read." —The Rumpus

"Mohr manages to craft characters that are despicable at first but as they grow, the reader grows, and we then find ourselves cheering them on in the face of adversity, themselves, love, life, reality, and death." —Pank Magazine

"It is impressive how vividly Mohr paints his characters, and how richly he weaves their stories in a book just slightly over 200 pages...they are beautifully alive." —Devourer of Books

“It’s hard to believe a suburban father’s desperate quest to turn his life around could be so much fun, but that’s exactly how readers are likely to react to Fight Song... a brisk, contemporary Odyssey with Cyclops and the sirens replaced by a cast of characters including a crying magician, who doubles as a marriage counselor and a bodybuilding fast-food worker who moonlights as a phone-sex operator. Mohr…brings a dollop of David Sedaris–like humor to the pathos. While irreverent, he gets to the heart of real emotion with bracing frankness…It’s a surprisingly sweet, rollicking tribute to anyone who’s ever needed a fight song to fight back.” —Booklist

“An unusual take on a mid-life crisis narrative, Mohr's novel… offers unexpected—often brilliant—confrontations of modern clichés…Mohr's elegant writing and colorful milieu is refreshing, an interesting mix of Charles Bukowski and Tom Robbins, with a cinematic heaping of the Coen brothers for good measure.” —Publishers Weekly

“Mohr has a clever imagination, and this book... hinges on some universal issues, namely Bob’s struggles to rekindle his romance, recapture his creativity, and regain control of his life. To the book’s credit, Mohr never loses the story’s emotional heart.” —Kirkus Reviews

"With his fourth novel, Joshua Mohr pushes himself into bold new territory and doesn't skip a beat. Fight Song is a whimsical, madcap, delightfully depraved fable for our age." —Jonathan Evison