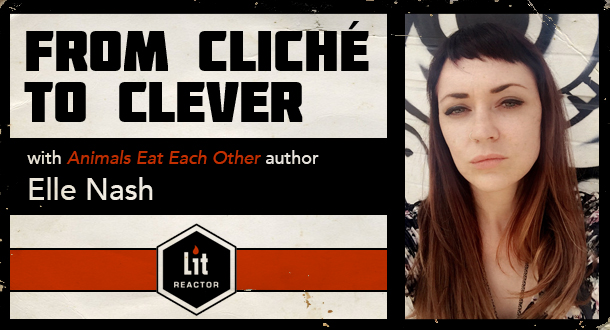 Learn how to identify and remove cliches from your work and develop your unique voice in this three-week workshop with acclaimed author Elle Nash.

Your Instructor: Elle Nash, author of 'Animals Eat Each Other'

How do you elevate your prose from cliche to clever?

Metaphors serve an important purpose—they pull forth an image to render a specific emotional feeling to a reader. But sometimes, those metaphors become overused and can create a text that is dull and cliche, which then fails to express the type of emotional response you want.

Your goal as a writer is to “bring the reader to their knees”—that is, to wrap a reader so fully into the emotional and spiritual content of the work that they feel moved by it (or as Lidia Yuknavitch says, art doing its verb thing).

In this class we will learn how to identify cliche text and then twist, turn and unpack these phrases to 1) create a more unique voice, one that is yours and yours alone and 2) create more sensory detail in the story. And your guide will be Elle Nash, author of the acclaimed Animals Eat Each Other, which was hailed in a starred review in Publishers Weekly as "a complex, impressive exploration of obsession and desire."

Elle is also a founding editor of Witch Craft Magazine and a fiction editor at Hobart Pulp, and her work has been featured in places like Volume 1 Brooklyn, The Fanzine, Cosmopolitan, Elle, The Offing, and Enclave.

WEEK 1: Metaphors, Similes, and Why We Use Them

You will explore a brief history of metaphor use in the contemporary novel, why writers have come to use them (and overuse them), and the psychological/emotional effects of metaphors in the work. You will discuss how to identify a cliche.

This week you will discuss how to use the five senses to unpack overused or bad metaphors to get at the emotional root underneath the cliche.

WEEK 3: Minimalism, or When To Hold Back

*Each week will include writing assignments, that will be critiqued by Elle and your classmates, as well as reading assignments selected by Elle, and discussion opportunities.

Elle Nash is the author of Animals Eat Each Other. She is a founding editor of Witch Craft Magazine and a fiction editor at Hobart Pulp. Her work has been featured in Volume 1 Brooklyn, The Fanzine, Cosmopolitan, Elle, The Offing, Enclave, and other places. She lives...

“Elle Nash's ‘From Cliche to Clever’ was an introspective exercise of unpacking. She honed in on lazy writing and sharpened our use of metaphor. She also coached the abandonment of such tools when raw, sensory inspired writing provided the required grittiness and realism.” —E. Dunne

“A scintillating work of literary erotica...the way [Lilith] elucidates and wrestles with her sexuality and identity is perceptive and raw.” —Book Riot

“The first page of Animals Eat Each Other knocked me on my ass...Elle writes with an incredible amount of intensity and emotional honesty and, damn it, just read this book.” —LitReactor

“Electric, sensual, and brutally human, Nash explores the boundaries (or lack thereof) when it comes to sexual desire. It is an exquisitely crafted work where every sentence feels so important, so real that it stings the skin. ... A supremely gripping work....a remarkable novel that crackles from beginning to end.” —Medium

“An unsettling work in the tradition of books delving into the emotionally ragged connections that form in the least likely places.” —Vol. 1 Brooklyn

“Nash is an acute observer of human appetites, and Animals Eat Each Other establishes her as a voice on the rise.” —The Masters Review

“A mélange of sex and violence and drug use and teenage ennui . . . a devastating first book.” —The Fanzine

“Elle Nash's Animals East Each Other is a desire map, a cartography of eros. Two women and a man weave their contradictions and obsessions and aches into one another until names, bodies, and selves dissolve and reconstitute in ways they could not have imagined. Mirrorings, doublings, triplings, and reproductions bring the right questions to the surface: who are we when we enter into love stories? Does anyone know? A heartbomb.” —Lidia Yuknavitch, author of The Book of Joan

“A savage, nuanced dive into the dynamics of queer sexuality, love and anti-love, jealousy, sadomasochism, Satanism, and everything else caught in the fray of a woman's self-abandonment. Nash's subtly spare prose renders matter-of-fact what we're so often afraid to articulate to ourselves, let alone to the people we give ourselves over to.” —Sarah Gerard, author of Sunshine State