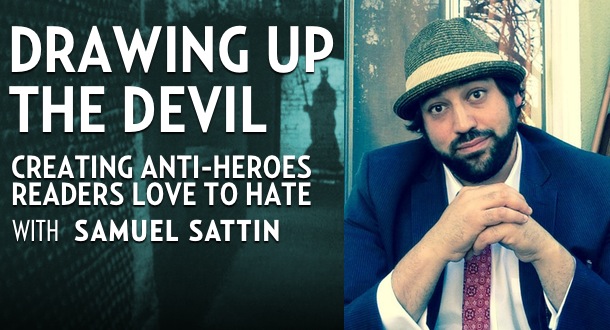 In this two-week crash course, you'll delve into what makes us identify with anti-heroes and villains, and how to successfully create them—without crossing the line into caricature.

Let's have a conversation about God and the Devil.

Not in a religious sense, but as writers.

God, in the Christian canon, is absolute. He is predictable, doubtless, and doesn't take moral risks. The Devil, however, has a mind all his own. A deviousness that keeps you guessing.

While God's sense of reality can seem unachievable by mortals, the Devil's is something we can understand—and even relate to. From Lolita's Humbert Humbert and the Satan of Paradise Lost, to modern-day film demons like Norman Bates or Tony Soprano, we often find ourselves fascinated by the creature in our midst.

While God rules over us by command, the Devil tempts with promises of knowledge. He is depicted popularly as anything from a snake to a man in a white suit—while the ruler of the cosmos is never clearly defined. Perhaps this is because he, unlike the Devil, has nothing in common with us.

In Drawing up the Devil, Samuel Sattin, author of the critically-acclaimed League of Somebodies, will teach you how to develop antiheroes and villains. You'll delve into what makes us identify with loathsome characters, and how to create them successfully—without crossing the line into caricature. You'll discuss what keeps us rooting for certain bad guys to get away, even when we know that they're wrong.

You'll look at everything from novel excerpts and short stories to a few examples of television, comics, and film.

Optional readings will include craft essays (all of which will be made available by Samuel) from the likes of Stephen King and Vladamir Nabokov. You'll also have writing assignments, and plenty of opportunities for discussion.

In this class, you're going to create your own devils.

And you're going to have a hell of a time doing it.

* Class starts July 10—but there's still time to get in and catch up!

Week One: The Monster with a Cause

We will begin with a lecture discussing our fascination with antiheroes and antagonists in fiction. Optional readings will include sections of Vladimir Nabokov's Lolita, Stephen King's On Writing, and Lewis Hyde's Trickster Makes This World.

Writing Assignment: From Mary Shelley’s Frankenstein to Dracula and The Strange Case of Dr. Jekyll and Mr. Hyde, there is a time-honored tradition of writing about monsters. In this exercise, you are going to take a minimum of 1,500 words to do the same....

Week Two: Drawing up the Devil

As we enter week two, we will descend into the depths. This lecture will discuss the worst sort of villains. Namely, those that hurt others for twisted reasons. We will attempt to pinpoint when violence and sadism become gratuitous, and how to make sure your antiheroes don't slide into caricature. We want to avoid the mustache twirling evil doers all too common in our culture. We will look at everything from Alan Moore's The Watchmen to Paradise Lost, Dexter, and The Sopranos.

Writing Assignment: The goal in this assignment is to create another monster, but this time of the human kind. I want you to try and insert this person into a modern context and avoid, if you can, hard genre elements...

"League of Somebodies reveals something fundamental about humanity: we all wish to change, to become the most powerful version of ourselves."

"Somebodies is a superhero story the way Mel Brooks' Young Frankenstein is a tale of classic horror; It's about super-powers and alter-egos, yes, but underneath the rollicking adventure and madcap comedy, Sattin has managed to to lovingly de/reconstruct the myth of the uber-masculine superhero."