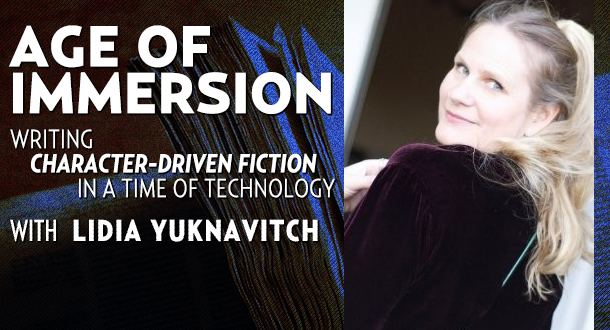 Learn to tell human stories fit for an age of full-immersion technologies.

Your Instructor: Lidia Yuknavitch (author of The Chronology of Water)

In his essay “Utopia Achieved,” Jean Baudrillard said American culture is “space, speed, cinema, technology.”  Now more than ever we play out the pageantry of his “desert of the real,” with our technologies overtaking realities with ever-snazzy simulations.  Think of evolutions in environment, medicine, biotechnology, artificial intelligence, space travel, computers, nanotechnology.  Our technologies are not only urgently pressing in on us, they have become immersion technologies. They are every part of our being. What does that mean in terms of fiction writing, storytelling? What are the human stories we long to tell from these new horizons? What is the futurology of narrative when the future is now?  How do we capture the current urgencies of our time? How do we cast the shortening space between present and future?  The stories of our selves are encased inside our immersive technologies.

In this workshop we will write six short fictions that reflect the spirit of our existence inside immersion technologies – the cultural, intellectual, ethical, spiritual, environmental or political climate within our lives, along with the general ambiance, morals, sociocultural direction, and mood associated with our era of immersion technologies. The human stories and spiritual evolutions at the heart of our creations.

Week One:  Your Setting Will Consume You
We start off with both the tradition of creating setting AND the breaking down and breaking through of that tradition to create settings that emerge from contemporary life.  We’ll be building settings based on evolutions in environment, medicine, biotechnology, artificial intelligence, space travel, computers, nanotechnology, you name it. In this way we will participate and perform what William Gibson called “the landscapes of cultural being.”

For example, Consider the “setting” or space of a city.  One of my favorite philosophers, Paul Virilio, has this to say:

"The virtual city is the city of all cities. It is each important city (Singapore. Rotterdam, Paris, Milan, etc.) becoming the borough of a hypercity, while ordinary cities become in some sense suburbs. This metropolization of cities leads us to conceive of a hypercenter, a real-time city, and thousands of cities left to their own devices. If I am correct, this would lead to a pauperization, not of continents but of cities, in all regions of the world.”

We will explore how to write THAT.

Week Two:  Reimagining the Antagonist
We all know by now what traditional protagonists and antagonist are.  We are also pretty familiar with sci fi and cyberpunk distortions of that idea – Roy Batty is the antagonist turned protagonist extraordinaire – but what narrative options open up for us when we consider the idea that our technologies create our realities?  How does that redefine the antagonist?  Working with either creating a new antagonist for future stories or work, or one you are already working on, we will take apart the idea of antagonist as a character, group of characters, or institution, that represents the opposition against which the protagonist must contend, and rework the idea of antagonist based on the possibility that protagonist and antagonist are not stable categories any longer.

Week Three:  Beyond Cyborgs
Philip K. Dick once said that “we will not only live to see cyborgs as reality, in fact in medical technology we are already there; we will also live to see the beyond of cyborgian reality.”  I’ve always been mega intrigued by that sentence.  For one thing, what the hell did he mean? Ha! But more specifically, what does it mean to create characters who are so immersed within their technologies (as I would argue we already are right. This. Second.), that their “existence” is both beyond human and beyond not human?  This week we will seriously interrogate the human / data / machine / speed interface to see what new strategies we can bring to characterization.

Each time a wall in our experience is reached, there is a retreat. And history has just struck the wall of worldwide time. With live transmission, local time no longer creates history. Worldwide time does. In other words, real time conquers real space, space-time. We must reflect on this paradoxical situation which places us in a kind of outside-time. Faced as we are with this time accident, an accident with no equal.

So why are we bothering with linear narrative, is my question.  This week we warp time to see what the narrative possibilities are beyond linearity.  Way beyond.

Week Five:  Technotopia
This week we will challenge the idea that immersion technologies are “spooky” or overcoming us and explore the idea that there is no other world, no other time, and it is glorious. To live in one reality and then, from time to time, enter another, through a night of drinking or hallucinogens, is one thing. But to live all the time through telecommunication and the electronic highway is another. It’s what Debra Diblasi calls "stereo-reality.” It is absolutely without precedent.

Week Six:  The Heart is a Lonely Hunter (with very cool vestiges)
Of her short story “Bloodchild,” Octavia Butler said “there is no ‘alien’ that is not within us already.”  What if everything we ever considered “other” or alien is already in us?  You know, the way we now know we are literally made from stardust and space junk – the material of matter and the cosmos – what if we are also made of everything we think is outside of us?  What if even our technologies are merely “versions” of what’s biologically in us now – for instance, the way computers mimic but still haven’t caught up with the human brain?  Or the way stem cell research may show us how we already contain within our bodies the ability to grow new body parts like starfish and other living things do in embryonic stages?  And what if that fundamentally changes human relationships?  This week we’ll explore the idea that human relationships may radically change, or, are already changing, and write our way to performing that.

I’ll leave you with another enticing, or terrifying, or simply weird quote from Paul Virilio:

“What's on its way is the planet manwoman, the self-sufficient manwoman who, with the help of technology, no longer needs to reach out to others because others come to himher. With cybersexuality, heshe doesn't need to make at love at hisher partner's house, love comes to himher instantly, like a fax or a message on the electronic highway. The future lies in cosmic solitude. I picture a weightless individual in a little ergonomic armchair, suspended outside a space capsule, with the earth below and the interstellar void above. A manwoman with hisher own gravity, who no longer needs a relationship to society, to those around him, and least of all to a family.”

Lidia Yuknavitch is the author of the memoir/anti-memoir The Chronology of Water (Hawthorne Books), the novel: Dora: A Head Case (Hawthorne), along with The Small Backs of Children (HarperCollins), and three books of short stories. Her work...

Lidia's Ecstatic States class is the first I've taken at LitReactor, and it set the standard by which future classes I take will be judged very high indeed.  Rather than concrete rules and rigid methods, Lidia employs more fluid, abstract concepts and writing prompts, challenging you to infer meaning and draw your own conclusions.  As a result, you feel a real sense of achievement as you discover your own writing strategies and produce work you didn't know you were capable of.  The course is intense and requires a lot of hard work, but it is most certainly worth it.  I recommend it to anyone who wants to improve their writing, because no matter where your interests lie, there are plenty of valuable lessons to be garnered from Lidia's teaching; she personally reviews each of your assignments and provides you with engaging, high quality and constructive feedback.  Whatever your writing goals, if you're serious about achieving them, this is the class for you.

Framed by the "ecstatic states" of sex and death, Lidia built a rigorous and tender zip line from the heat of the body to the blazing tip of the pen. Her lectures are comprehensive, her discussions are scintillating and her assignments placed me in brand new territory, full of risk and thrumming energy. Lidia has a powerful presence in what could be a faceless online setting and pushes each writer to go further, hit harder and ultimately, reap the rewards of writing that sings with truth and authenticity. In just six weeks, I produced an armload of new work and an all-consuming fire inside to keep going.

Are you ready to see the world through Google glasses? Ready to read and write narratives that keep pace with innovation? Human identities and the boundaries of community are changing rapidly with changing technologies. What used to be the realm of hardcore sci-fi geeks is progressively becoming quotidian. Authors of every stripe and genre can no longer afford to be even three years out-of-date in their technological references and understanding. Unless writing a period piece, you wouldn't have your character searching out change for a payphone, right? Well, there's more to getting contemporary fiction right than interrupting talk with text messages. There's a whole world of Matrix-style immersion and we're right on the cusp. If you're at all intrigued with how this plays out for popular storytelling, and how to integrate this understanding into your own abilities, then I'd highly recommend the new LitReactor class, Age of Immersion, with our friend, the multi-talented Lidia Yuknavitch. This class is the perfect follow-up for previous students of her wildly popular class, Ecstatic States, and it's suitable for intermediate and advanced students of fiction who are first-timers with Lidia, as well.