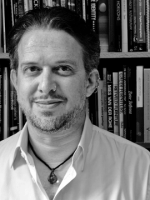 Dean Fetzer is originally from a small town in eastern Colorado, but has lived in London, England, for 21 years now. On reaching London, he worked as a graphic designer and web consultant before starting a pub review website in the late 90’s.

Dean left pub reviews behind in 2011 to concentrate on his writing and to set up a new company offering publishing services to authors, poets and artists as well as blogging and writing book reviews on his website at www.deanfetzer.com. He lives in east London with his wife and two cats and dreams (often) of a house in France.