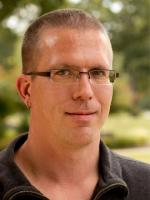 Dale Bailey lives in North Carolina with his family, and has published three novels: The Fallen, House of Bones, and Sleeping Policemen (with Jack Slay, Jr.). His short fiction, collected in The Resurrection Man’s Legacy and Other Stories, has been a three-time finalist for the International Horror Guild Award, a two-time finalist for the Nebula Award, and a finalist for the Shirley Jackson Award.

His International Horror Guild Award-winning novelette “Death and Suffrage” was adapted for film by director Joe Dante as part of Showtime Television’s anthology series, Masters of Horror. His short story collection, The End of the End of Everything: Stories, will be coming out in April 2015.