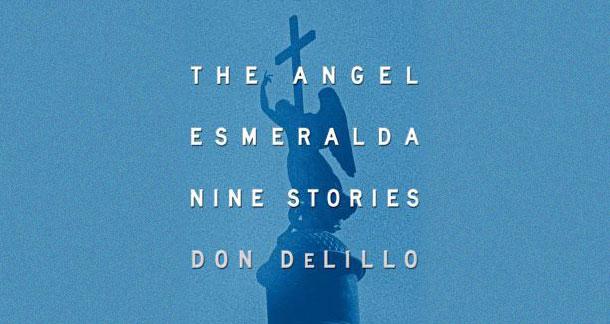 You might find this hard to believe, but The Angel Esmeralda is 75 year-old author Don Delillo's first ever collection of short stories. How can that be, you ask? According to THIS article, it's because he hasn't written very many of them. In fact, Scribner editor-in-chief Nan Graham says she's been mulling a Delillo collection for over ten years now, there's just never been enough material to warrant one. She credits the author's recent increase in output with finally making the dream a reality. And even though you didn't know it was missing from your life, now that you've got it, you wonder how you lived without it all these years.

The book contains nine stories, published between 1979 and the present. At least four take place in Manhattan, but without certain topical sign-posts you'd be hard-pressed to guess the decade in which they were authored. Delillo's writing has exhibited minimal stylistic change over the last 30 years, although long time fans would argue that even his recent shorts are more representative of the young Delillo, lacking the philosophical meandering of his last few novels. They are compact, punchy little works. A flurry of consistent jabs designed to stun the reader into epiphany. The rope-a-dope defense would be ill-advised, because Delillo is unflagging as he works the brain-body with precision.

The collection itself is broken up into three parts. The first offers a pair of stories from the late 70's/early 80's, part two covers the late 80's through the mid 90's, and part three represents the naughty aughties and beyond. It opens with the appropriately titled "Creation," which might actually be about the end of something. We then fast forward to the post-apocalyptic future with "Human Moments In World War III," giving us a rare glimpse at what Delillo can do with genre.

Part two leads off with "The Ivory Acrobat," written in 1988. It is yet another example of Delillo's prescience as a writer, detailing personal paranoia in the wake of a devastating earthquake. Despite the fact that it was written more than ten years prior, it is the perfect allegory for post 9-11 America, which Delillo would go on to write about with hindsight in Falling Man. (For another example of Delillo's Nostradamus-like abilities, check out his 1991 treatise on terrorism, Mao II.) "Acrobat" is followed by "The Runner," in which a woman who witnesses a horrible event must invent a fictitious backstory in order to cope. It demonstrates how people use the superficial ability of a lie to protect themselves, like hiding under the covers in the dark.

Then there's the titular centerpiece, "The Angel Esmeralda." It tells the story of two Bronx nuns- one young, one old- and the heavenly apparition of a murdered child. I don't know if said apparition has been officially recognized and approved by the Holy Catholic Church, but it makes for an emotionally devastating parable about grace in the face of futility.

Finally, we have the four stories of part three.  "Baader-Meinhof" is a chilling look at The Richter Cycle of paintings and random violation.  The similarly themed "Midnight In Dostoevsky" and "The Starveling" both deal with the desire to know the unknowable, and again feature characters compelled to invent stories about strangers. Sandwiched in-between is what could be my favorite piece of the collection, "Hammer and Sickle." Jerry is a white-collar criminal in a minimum security prison who thinks his ex-wife might be speaking to him via his daughters, who host an economics report on children's television that is popular with the inmates. As the girls become better broadcasters, Jerry becomes less sure of what they are trying to say to him.

And just like that, you're reached the end of the book. Lucky for you, there is plenty to mull over, after the fact. If I may be so bold, The Angel Esmeralda makes for a great book club selection, so why not read it with some friends? I'll help start things off:

If there is a common thread running throughout Esmeralda, it is the desire to know. Especially when it comes to other people. The who, what, where, and why of them; possibly with an eye towards self-discovery. And just like regular people, when an actual answer to those questions is unavailable, Delillo's characters attempt to quantify the unknown. Whether by something as simple as guessing a person's occupation, or as complex as intuiting the motivation of a 17th century BC Minoen bull-jumper based on a replica figurine. It is identity obsession. Instead of staring into the vast emptiness of the abyss, we'd rather fill that void with useless junk to ease our spiritual agoraphobia. Because if we can't figure out what makes other people tick like bombs, chances are we'll never figure out our own lives, and we'll wind up cutting the wrong colored wire. The emptiness inside will fold in on itself and implode due to lack of self knowledge, which is probably what scares us the most.

I read Creation this morning and wasn't really sure what it was about. :/

Joshua Chaplinsky from New York is reading a lot more during the quarantine November 22, 2011 - 8:18pm

But that's what's so great about these stories. They are open to interpretation. Sure, a series of events happens, and there is an ending, but they are not plot driven. These are character pieces, beautifully constructed to make you think.

I just read DeLillo's, White Noise, it was really good. This sounds like he's working with a lot of the same themes, maybe with a new twist on some of them. They sound good!

Hetch Litman from Somewhere in the mountains of the Pacific Northwest is reading The Violent Bear it Away by Flannery O'Connor December 16, 2011 - 5:56pm

between the reviews and author interview pieces Ive spent over 80.00 this week alone on new books. That'sm it I have to block myself from Litreactor. I have no will power and it's all you bastards fault.