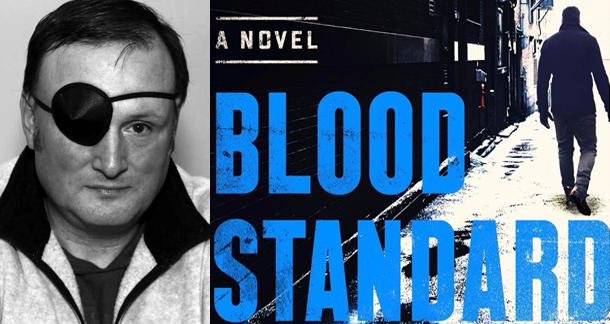 Isaiah Coleridge is a familiar face. Consumers of crime fiction will recognize him like an old friend passing on the street. Resemblances to hardboiled legends like Travis McGee and Jack Reacher are not only on the money, but also intentional. Laird Barron has been writing professionally for nearly twenty years at this point, (barely) surviving on the strength of his short horror stories, but Blood Standard marks his first real stab at commercial fiction. Please don’t grimace at the term “commercial fiction”, either. I know it tends to bring to mind works from lesser authors. Yes, it’s true Barron has written a commercial novel, but if you think he’s toned down his level of brutality and savagery for even a second, you better think again, buddy.

It’s true Barron has written a commercial novel, but if you think he’s toned down his level of brutality and savagery for even a second, you better think again.

Isaiah Coleridge is the lead in Laird Barron’s new series about a gangster trying to go straight. From an outsider’s perspective, many of his character traits will grant you a speedy victory in Noir Trope Bingo. And, from an author with less experience and talent, perhaps that’s where this review would end, but we’re talking about a true master of the craft here. In his new novel, Laird Barron doesn’t recycle tropes—he embraces them. Coleridge feels as real as any character could possibly feel. His background is fully developed and guaranteed to fascinate readers. Coleridge has already lived a full life in Laird Barron’s head, even if the majority of his memories only exist on a subconscious level, and we only receive a glimpse of that life in Blood Standard.

After Coleridge messes with the wrong wiseguy, he’s shipped off from Alaska to a New York farm to recover from the consequential beatdown. He’s out of the game. Finished. Lucky as hell to even be alive. What comes next is up to him, a decision he comes to terms with as he bonds with his new landlords and neighbors. The narration here is fun and, at times, damn-near poetic. Here is a man inviting you in for a tale. He is an open book prepared to talk about all the fucked-up shit he’s done in his day, as well as some of the good things, too. He ain’t all bad, but he’s no angel either, not by any stretch. The title page of this book features a giant fist. This is classic tough guy cinema splattered across a blank page. People bleed here. They get hurt, and sometimes they don’t get back up.

For over a year now, Laird Barron has been pitching this book as the unofficial Pulp Fiction spinoff nobody asked for. Specifically, a spinoff featuring Samuel L. Jackson’s character. After the infamous diner scene, Jackson walks out onto the street with intentions of getting out of the game for good. But what happens to him then? According to Laird Barron, Isaiah Coleridge is what happens. And you know what? I’d have to agree. This character is indeed one badass motherfucker. Attack dogs take one look at him and turn the other way, even as their masters order them to kill. His body is a roadmap of scars. When he walks into a room, he does not go unnoticed.

During a recent reading at BookPeople in Austin, TX, Laird Barron revealed he had plans to carry Coleridge’s story to nine-or-twelve novels (“but don’t hold me to that number,” he pleaded, laughing). He sees each book as a new chapter in his narrator’s life, each one building off the last. But he doesn’t want to continue the series indefinitely. In Barron’s head, there’s an overall arc to Coleridge’s tale. Readers owe it to Barron to spread the word about Blood Standard, because obviously there’s no guarantee we will ever receive the entire series he has in mind. But, market-willing, we are in it for the long-haul with Isaiah Coleridge, and I couldn’t be more thrilled. This fella’s a keeper.