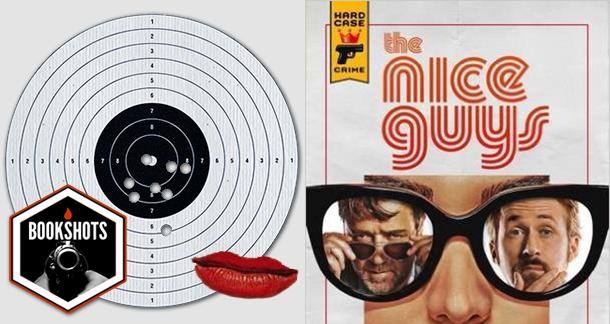 In a world of lazy, thoughtless novelizations, 'The Nice Guys' will stand out as one that truly cared.

Charles Ardai, the founder of Hard Case Crime. If you aren’t familiar with Hard Case Crime, then you can’t call yourself a crime fiction fan. Launched in 2004, HCC releases both reprints of classics from the pulp era and original novels by new and emerging authors. He’s published books by Stephen King, Christa Faust, Lawrence Block, Jason Starr, and many other wonderful folks. When Ardai isn’t editing, he’s writing—like The Nice Guys, and also: Little Girl Lost, Songs of Innocence, and Fifty-to-One.

Adapted from a screenplay by Shane Black, who created such classics as Lethal Weapon, The Last Boy Scout, The Long Kiss Goodnight, and Kiss Kiss Bang Bang.

A professional tough guy and a spineless private investigator team up to find a missing person. Hilarity ensues.

Kiss Kiss Bang Bang. Anything else by Ardai. The works of Jedidiah Ayres, Johnny Shaw, Carl Hiaasen, and Elmore Leonard.

Holland March - an alcoholic private investigator with a dead wife and a daughter too smart for her own good. No job is too low for March. Hell, he’ll even search for your missing dead husband if you pay him enough. Who cares if his urn is right there on the fireplace? He’s gonna stretch the investigation out as long as the money continues.

Jackson Healy - what you’d consider a professional tough guy. An enforcer-for-hire. You got someone you need learning a lesson, someone who could really use a couple cracked ribs? Healy’s your guy. Just as long as you have the payment up front.

Okay, so this one will be pretty easy, considering this is a novelization of a movie already made. So…

Look, it’s no secret that I have a tremendous boner for anything Shane Black touches. Kiss Kiss Bang Bang is one of the best comedy crime films I’ve ever seen, and Lethal Weapon is so perfect it’s practically holy. When the first trailer for The Nice Guys was released last year, I watched it probably a hundred times. I couldn’t remember ever having laughed so goddamn much at a trailer. Imagine how great the movie would be! Then there came news of a novelization. Released by Hard Case Crime of all the places, and written by HCC’s main honcho, Mr. Charles Ardai himself. I don’t remember what was pressed first: the pre-order button or the zipper on my jeans.

This book arrived in my mailbox on May 10th and I had it finished by May 11th. This thing starts with a bang and it doesn’t let up for a second. The action in this book is intense and hilarious. The chemistry between March and Healy is a beautiful thing that fans of Shane Black will find familiar and welcoming. It’s difficult to tell sometimes what was borrowed from the screenplay and what was created by Ardai, but the published work is a piece of beauty I’ll be returning to after I eventually see the film. Go see it! And also, read the novelization. Ardai is a poet of the noir. His prose is slick like butter you want to roll around in during an orgy. His words spin and guide even the shadiest souls.

Ardai made this story his own. In a world of lazy, thoughtless novelizations, The Nice Guys will stand out as one that truly cared.