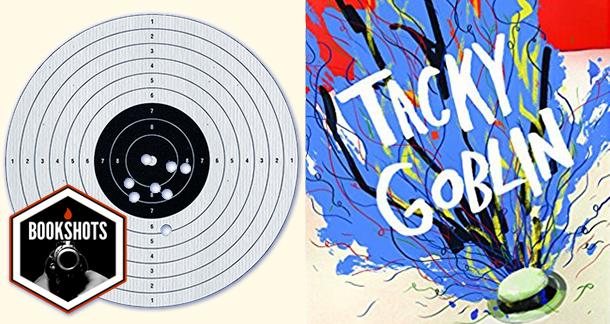 Ne’er-do-well writer moves from the suburbs of Chicago to Los Angeles and then moves back. That’s it. It’s kind of like a 140-page episode of Seinfeld. Except it’s a Bizarro novel, so it’s like a Seinfeld episode on really crunchy MDMA.

Black Mold Is Our Friend

Jeremy Robert Johnson and pretty much anything published by Lazy Fascist Press.

Unnamed ne’er-do-well writer: He’s best friends with the black mold growing on his ceiling, his legs are rotting, and he loses huge stretches of time for no apparent reason.

Kim: The ne’er-do-well’s flaming bitch of a sister.

Tacky Goblin would probably make one hell of a weird art house flick, so I’d like to see Elijah Wood take on ALL of the roles.

Chicago: No, way too cold.

‘Remember all those blood smears we saw along the interstate, from Flagstaff all the way to Quincy?’ I said. ‘Sprays of gore, like an animal had been hit and dragged under a car for twenty feet until it released and thumped down the shoulder, a hundred times over? I was wondering, does the state have someone rinse that shit away, or do they let the rain take care of it?’

Bizarro is one of those genres you either love or hate. If you love it, it’s because you’re down with the hallucinatory prose, the Marx Brothers style humor, the rampant drug use, and the characters who usually grow an extra appendage or head. If you hate it, it’s because you can’t stand any weird shit and want a straight forward narrative without any of the absurdist bells and whistles. Five or six years ago, I was more on the hate side. The genre seemed like nothing more than warmed over William S. Burroughs, but with a tad more plotting. But I got past the hate and discovered a slew of extremely talented artists who were not only highly original, but flat out entertaining to read to boot.

Which brings us to Tacky Goblin. I’m not going to sugar coat it, if you don’t like Bizarro fiction, you’re going to hate it. If you’re a fan, you’ll probably think it’s just okay. The storyline is highly familiar and a lot of the imagery feels a bit overused. Not that it isn’t well written, but if you're familiar with Carlton Mellick III or Jeremy Robert Johnson, Tacky Goblin’s going to vibe like a book you’ve already read half-a-dozen times.