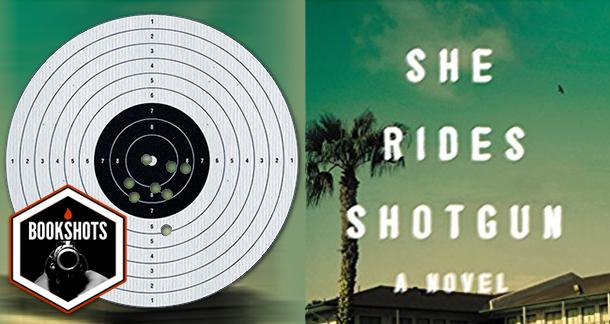 She Rides Shotgun (In the UK it’s called A Lesson in Violence, since I’m guessing the phrase “riding shotgun” isn’t well known over there?)

Prepare for your heart to race through the entire reading experience, because this thing is fucking intense as they come.

Jordan Harper, author of the wonderful collection Love and Other Wounds, and screenwriter for The Mentalist and Gotham.

A man nearly finished with his prison sentence crosses a powerful leader of the Aryan Brotherhood, triggering a greenlight on his entire family. To ensure her survival, he must kidnap his daughter before others get to her first.

Harper’s previous collection, definitely. Also, fans of Leon: The Professional will love this.

Nate, fresh out of prison, running not only for his life but also his daughter’s.

Nate — Garret Dillahunt (Maybe? I don’t know. I just want him to be in more movies. Give him a starring role, goddammit!)

Polly — All kid actors are terrible so I don’t know. GOOD LUCK.

California, which is a wonderful state, so yes.

The best road trip/chase novels begin at 100MPH and do not let up, not even for a second, and this novel is no exception. Prepare for your heart to race through the entire reading experience, because this thing is fucking intense as they come, and may in fact be my favorite novel of 2017. Yeah, I know, it’s only June, but I read this one back in February and I still can’t stop thinking about it.

This is a book that makes you seriously, fully emotionally invest in a character that is a stuffed teddy bear. This might be Jordan Harper’s first published novel, but it in no way reads like it. Harper is a goddamn pro and as good as anybody out there, and if you don’t believe me then you’re a fool. Buy this thing immediately. Buy three copies and hand the other two out to strangers. This book needs to be read by everybody, especially little girls.

T.D. Brooking from California is reading Black Wings has my Angel by Elliott Chaze June 6, 2017 - 1:39pm

Books are real asset and it seen on net for the easier approach and having control over it. The phenomena of good action for getting such one at home are the simple one for the people. The matter for the professional resume writing service reviews id the key one for the needy people.

John has been writing good books for the reforms and changes for the readers. Yes, the quality of the book is estimated by the people for the convenience in all australianreviewer affairs for the humans in this timely processing and scheme.

This is the right blog for anyone who wants to find out about this topic. You realize so much its almost hard to argue with you (not that I actually would want? Ha-ha). You definitely put a new spin on a unblocked potty racers that’s been written about for years. Great stuff, just great!

You’re so cool! I don’t suppose I’ve read anything like this before. So nice to find somebody with some original thoughts on this subject.  Really! Thank you for starting this up. This website is something that is needed on the location 4x4 Muscat Oman, someone with a little originality. Useful job for bringing something new to the internet!

It’s currently 2:30 am as I’m writing this while eating pizza rolls lol but I wanted to write this to see if anyone else is going through the same problems as me I’m currently scared for the future I’m 15 going to be 16 and idk what I want to do with my life I’m scared because my mom is working hard and lots of shifts to make up for us. I don’t want to disappoint her I want to make it up to her for all the tough times but I just can’t. Because of the corona School has been demotivating for me and I missed lots of days and I’m failing currently which I’ve never did before. Now I’m lost and stuck on what should I do I’m scared my mom will be disappointed and cry because I’m failing  but I can’t prevent it Ik it’s my fault but life just seems so stressful now it hurts. I wake up every morning just wondering is it even worth it and hope it will get better soon I get so much anxiety just thinking about the future my only escape to get relaxation is anime and LoFi. Ik I sound like a slacker but believe or not life use to be so simple I was a straight A student then lockdown came and I’ve been failing. friday night funkin I just wanted to vent out somewhere or with someone because everyone I’m close with won’t understand and will laugh at me.